Have you ever played a game and thought to yourself, “Hey, this seems very familiar!”? It’s not uncommon for games to have similarities to others, either on purpose or by accident. Sometimes it’s a coincidence that two designers came up with related ideas at about the same time. Other times it might be that you have come across a counterfeit or knockoff of a popular title. There’s a third reason which might account for your déjà vu – the game may now be offered by a new publisher who wanted to make changes, including the name.

A few years ago I played a game of Dragon Rampage at one of our game night gatherings. I was intrigued because it offered different ways to win and scoring depended upon how the game ended. That alone made it difficult to formulate a strategy because you had to be concerned about the strategies of your opponents as they might make your plans worthless. This same game has now been reissued as Dragonscales by Arcane Wonders and features streamlined rules and brand new modern artwork. 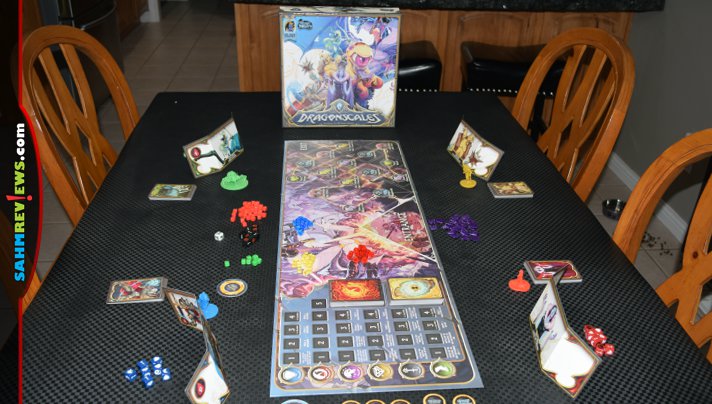 The premise behind Dragonscales is still similar. You and up to four opponents are villains trying to steal treasure from one of the world’s greatest dragons. Each of you has a unique advantage and the one to best utilize their special skills and tactics will earn all the glory. Some will try to slay the dragon while others will grab what they can and run away. Which method you employ is up to you!

Setting up for a game of Dragonscales is pretty quick thanks to the included organizing tray. Set the game board in the middle of the play area while everyone chooses a villain to play. Players will take the matching miniature, player screen, cards and dice for their chosen character along with three dragonscales. Colored cubes, which vary in quantity by the number of players and track wounds, are piled on each of the three dragon heads. Additional items (poison wound cubes, combat dice, dragonscales, etc.) are arranged into separate piles next to the game board. The decks of Dragon Rage and Treasure cards are shuffled and placed face-down on the board. 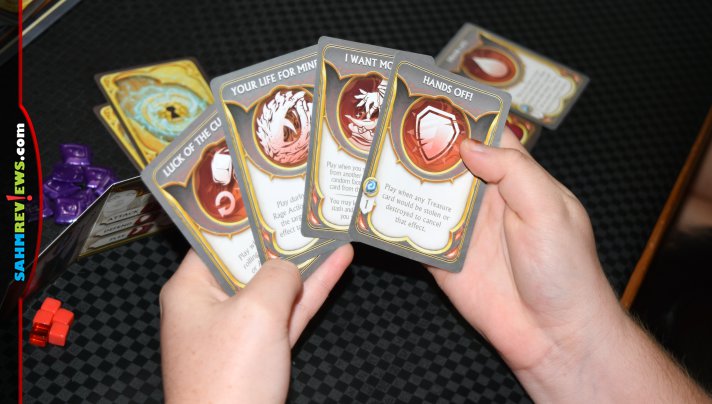 Players begin the game with three cards from their shuffled personal deck of Villiany cards, which are kept secret from their opponents. Your dice also remain behind your screen while dragonscales are always placed in front of the screen for everyone to see. A game of Dragonscales is played over rounds which are resolved simultaneously. Each round is divided into four phases, with each completed by everyone before proceeding to the next. 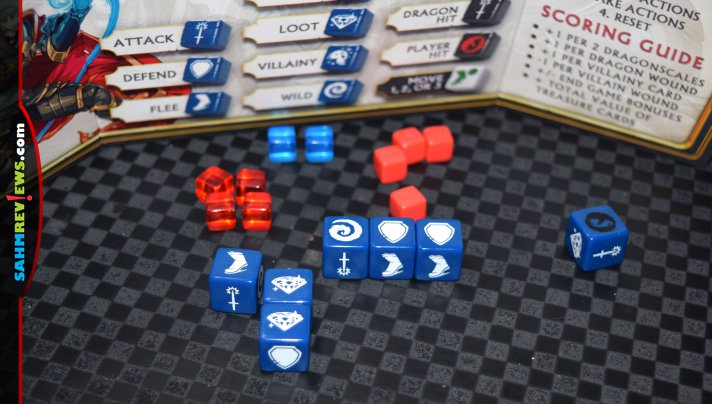 The first phase requires everyone to roll all of their dice behind their screen, Yahtzee-style (reroll as many as you like up to two times). Dice have custom faces and will determine what actions, and in which order, you will perform them. Like most push-your-luck games, if you roll a special symbol, in this case a Dragon Rage, that die may not be rerolled. Other symbols allow you to attack the dragon, defend yourself, steal some loot from the dragon, run away or even pilfer dragonscales! There is also a wild symbol on some of the dice that may be used as another symbol as long as you have at least one of them (you can’t use a wild for something you didn’t roll with another die). If you have Villiany cards in your hand that allow you to manipulate the die results, play them at any time. 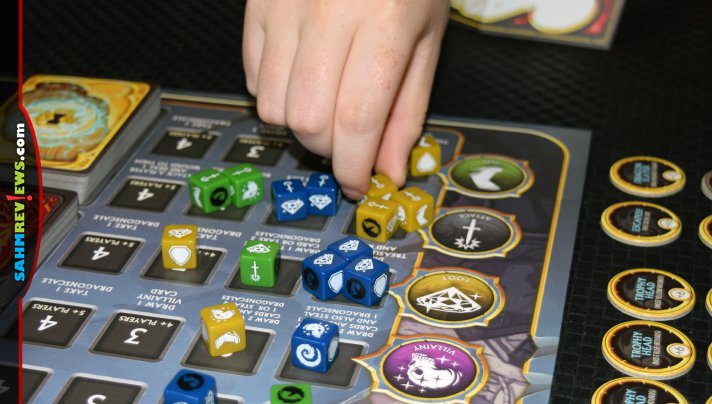 After everyone has finished rolling, all dice are revealed and will be placed on the board into their matching action slots. Starting with the first player, reveal your dice and fill the left-most space on the board with all dice of that symbol. If another player has already placed dice in a row, compare the number of symbols and either slide them to the right if you have more or take the next left-most open space if you have the same or fewer. The number of boxes available for an action row is always the number of players minus one. So…there is the distinct possibility you will not be able to use your die’s action if you only have one symbol and are furthest away from the first player. The one exception is the Dragon Rage row, where everyone attracts the attention of the dragon. 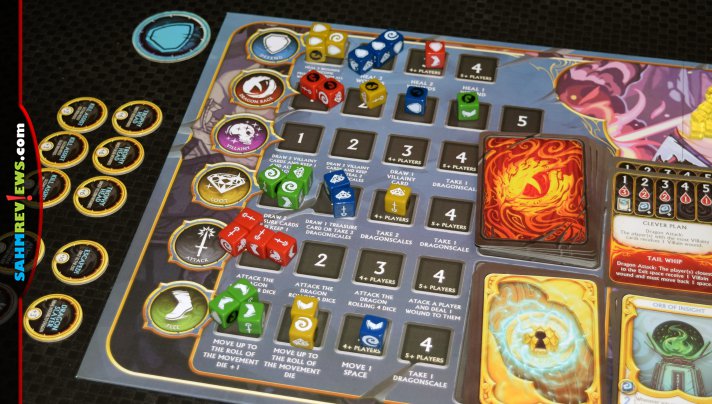 Once all dice are revealed and placed on the board, the corresponding actions are taken. Each row space has an action listed below it, worth less the fewer symbols you have in relation to your opponents. All are self-explanatory and range from healing yourself to being attacked by the dragon. These are resolved in order from top to bottom, left to right. 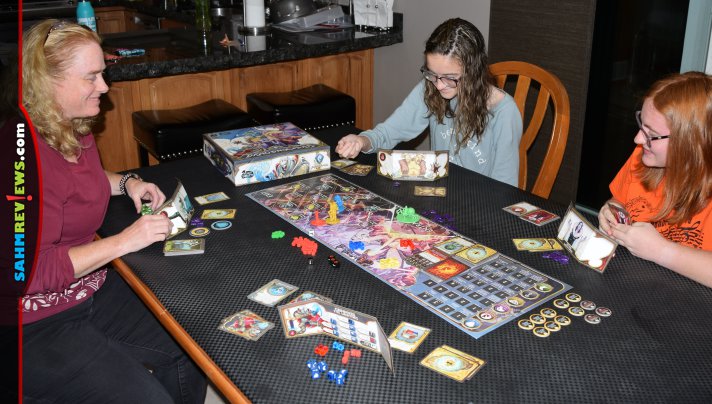 The Dragon Rage action is a little different from the others in that a card is revealed first. This will determine how much damage players in each spot take and then spawns an event. Additionally, if the dragon is enraged (which happens after you remove one of its heads), an enraged action is resolved, which is listed on the bottom of the card. 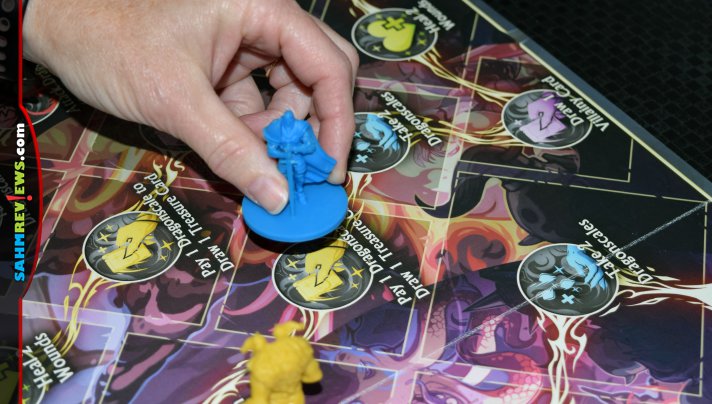 Speaking of head-removal, if all of the wound cubes on a head are removed, that head is slain. Once all three heads have departed, the dragon is vanquished and the game ends immediately. I mentioned previously about a multiple game-end conditions and one has to do with fleeing. One of the available actions is to make your way closer to the exit. You may only move in one direction (forward towards the exit), but do not have to move the full total of your die roll, or at all for that matter. If you move your miniature onto the exit space, you have escaped from the lair, also ending the game.

Oh yes, there is a third way the game ends and that is if all Villains have been killed. If you suffer enough wounds equal to or exceeding your maximum, you die and are out of the game. You will not participate any longer, but still have a chance of winning. If the game hasn’t been ended, all players take their dice back and the first player marker passes clockwise. Another round is played in the exact same manner! 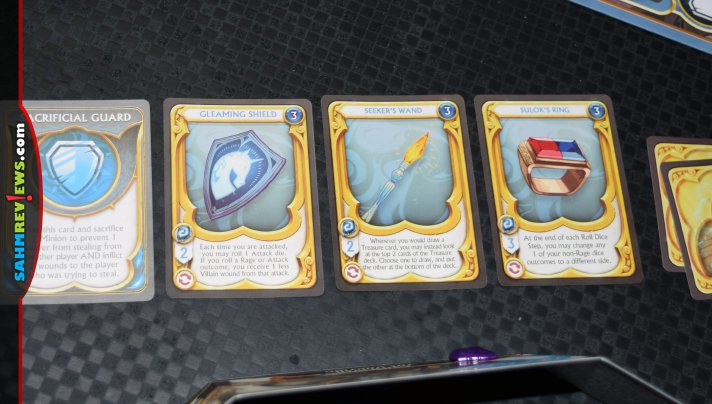 After the game ends, all players count up their victory points. These include treasures, dragonscales, unused Villiany cards and wounds you inflicted on the dragon. Subtract points for wounds you took and receive a reward for having caused the most dragon wounds of a particular color. Additional bonuses are awarded depending upon how the game ended. 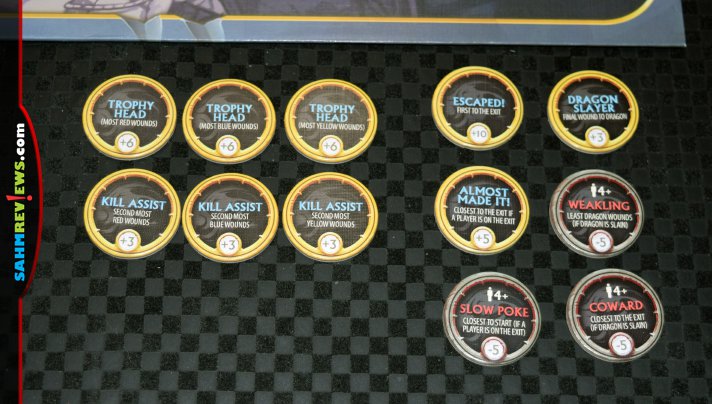 If the dragon was slain, the player who dealt the killing blow receives five points. Whoever dealt the fewest wounds to the dragon loses five points (Weakling penalty). The player closest to the exit also loses five points (Coward penalty). If a player escaped to end the game, that person earns ten bonus points. The next player closest to the exit also receives five points (Almost Made It! bonus), while the one furthest from the exit is branded a slowpoke and is penalized five points. If the game ended with all players having perished, no bonus points are awarded. A handy victory point guide is printed on the back of the rulebook, which is a nice feature that everyone can grab and study.

Having played this game’s predecessor, I do much prefer this version. It has better quality components, more attractive artwork and a very clear, even if a little long, rulebook. The price is right where you’d expect a good hobby game to be and you can find it on Amazon or use Arcane Wonders’ store locator to pinpoint a local retailer where you can pick it up today. They’re also showing some teaser information about two upcoming releases on their website, so follow Arcane Wonders on Facebook or Twitter to be notified about when they become available!

What game have you played where you preferred the newest version over the original?