It’s official, we’ve gone off the rails. With all the new an amazing movies out, Scott and I have started introducing the girls to some of the classics. Movies that were integral to pop culture. Series that we watched in years gone by. Shows that created phrases and descriptions that became part of everyday vernacular.

Last week we watch Predator but needed to pause it while Madison regained her composure after hearing Arnold Schwarzenegger yell, “Get to the chopper!” Movies from back then introduced groundbreaking technological advances in technology while also pushing the envelope on what was considered socially acceptable movie content. With as intrigued as they are with Don Carmine Falcone on Gotham, we know it’s time to introduce them to one of my brother’s favorite movies, The Godfather. However, first I need to re-watch it without the kids or research where it falls on the rating scale. With the absence of a PG-13 rating during those years, some movies were bumped to R that today might be considered acceptable for a teenager. In the meantime, we’ll play thematic games to help give some context to the movie. We previously introduced the girls to The Godfather A New Don as well as other mafia games so we’re on the right track. (Wait, is this considered good parenting or bad parenting?) 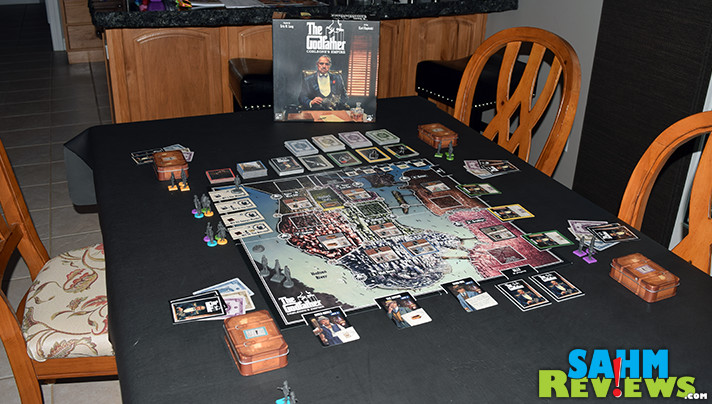 The latest addition to the ‘training” for The Godfather marathon is a recent release from CMON – The Godfather Corleone’s Empire game. The scene is 1950’s New York (of course) and rival crime families are vying for control. You and up to four of your friends use mob family members and thugs to shake down businesses, obtain illegal goods and gun down enemies in an all-out turf war. 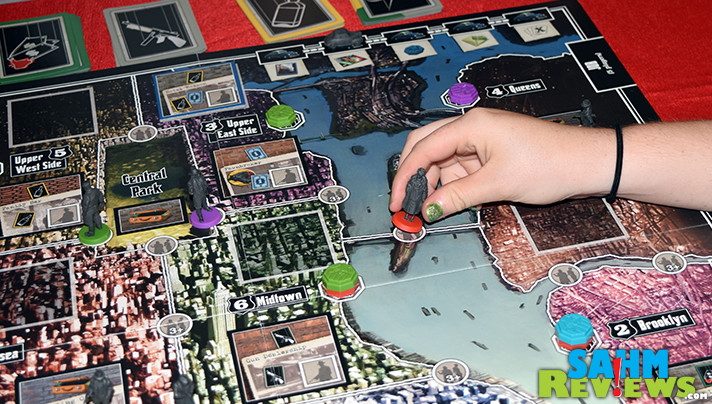 As is true of many CMON projects, there is no shortage of quality components. Not only does The Godfather Corleone’s Empire game include CMON signature unpainted miniatures, but it also offers a horse-head starting token and metal suitcases to stash laundered cash. The game takes place over 4 Acts with each consisting of 5 phases. The winner will naturally be the family with the most money on hand when the game is finished. 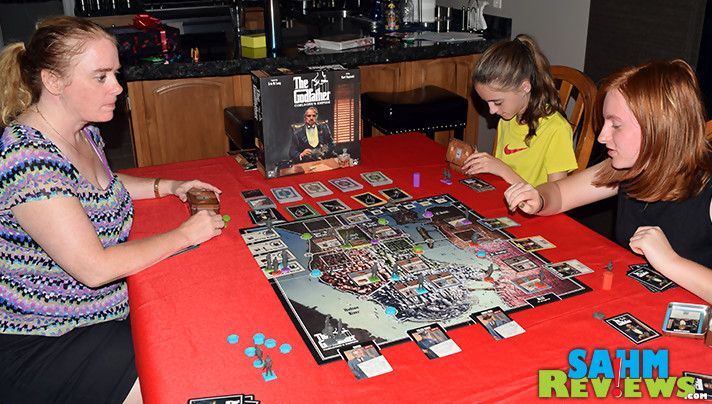 The board is divided into the various New York boroughs with each having one or two businesses (and more added in subsequent Acts). Seems only proper to have some allies and officials to bride so each Act will offer some based on the number of players. In addition, there are public jobs that will be replenished each Act. Each player begins with a Don figure and two thugs representing their crime syndicate in addition to a starting hand consisting of money and private jobs.  Additional members will join the family in Acts II and IV. 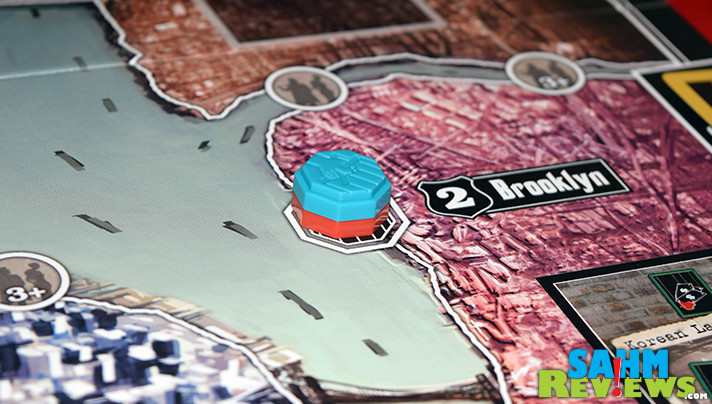 The bulk of the game takes place in the Family Business Phase which is where you’ll be adding your family members and thugs to the board as well as completing jobs. Once your last person is placed, you can no longer participate in the phase. Each member has a specific purpose. Family members stand on the borders between territories, collecting goods from all the businesses they oversee. Whomever has the most Family members overlooking a territory later in the Act earns the right to claim it as their turf in the following Act, earning bonuses when a rival Thug enters their territory. 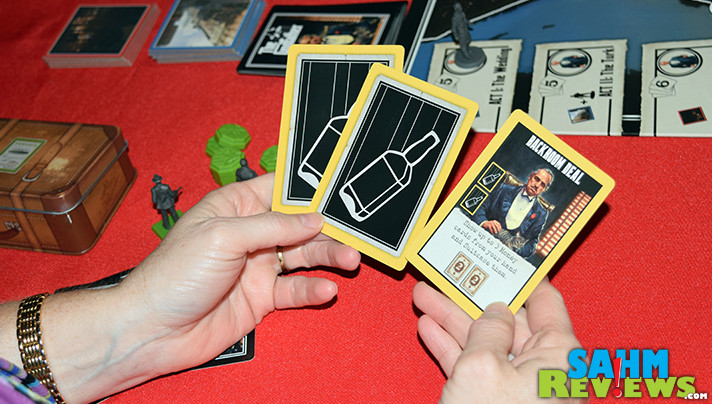 Thugs are tasked with shaking down the front of businesses. When their pawn is placed in a business, you’ll collect whatever illegal good, money or other action is represented on that space, including laundering money. These actions are how you’ll gather goods to complete private jobs in your hands or public jobs on the board. 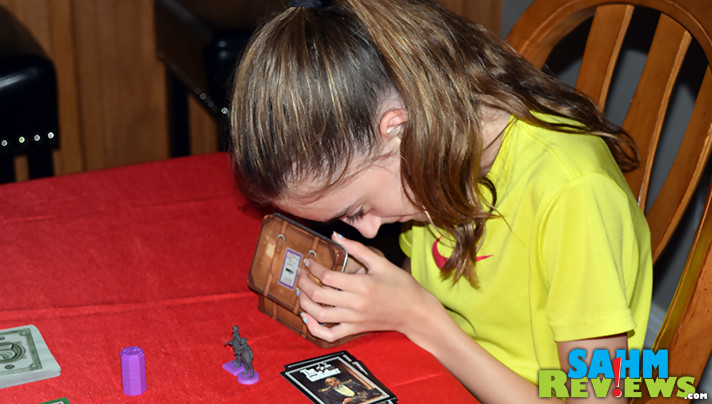 While completing jobs sounds like an easy task, it isn’t as simple as it sounds. There are a couple reasons for that. First, you’ll be racing everyone else to get to the necessary spots. As you earn money, it goes into your hand with the illegal goods. In order to launder your money and get it into the briefcase, you need to use an action to shake down a business that displays a suitcase. In case I hadn’t mentioned it earlier, you only start with 3 people to move into these various places. One of the phases of the round involves bribing officials or thugs with the money in your suitcase. If you succeed with the bribe, you’ll earn that card to play as an action in future acts.

So you’re sitting with this handful of money you couldn’t get laundered along with people you’ve bribed (allies) and illegal goods shaken down from the business around New York. Great, right? No. The last phase of each act involves paying tribute to Don Corleone. This is his empire, after all. You’ll get to select only a designated number (varies per Act) that you want to keep for the following Act and everything else is your tribute. You’ll need to plan well to get as much done as possible! 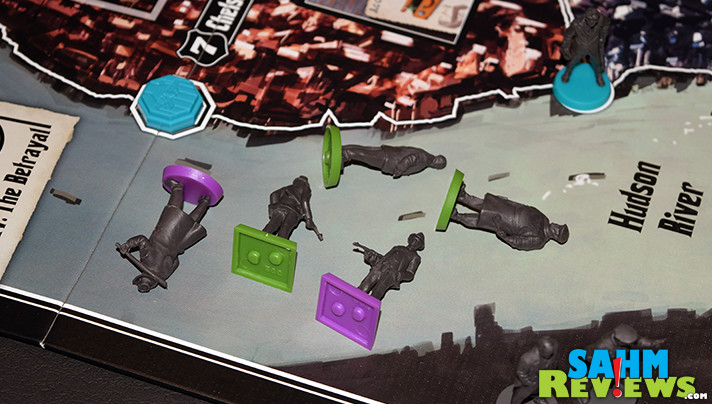 When the last cement shoe hits the bottom of the Hudson River, the person who managed to have a combination of the most laundered money in their suitcase and money for controlling Turf, wins. The concept of collecting illegal goods, gunning opponents down and bribing people is dark, but the game is not. We really enjoyed it as have people in our game group. If you’re ready to take on the competition, you can pick up a copy at your local game store or purchase The Godfather Corleone’s Empire game on Amazon for around $55. You can also shake down the CMON Twitter and Facebook pages for information on future releases.

Have you ever visited New York?