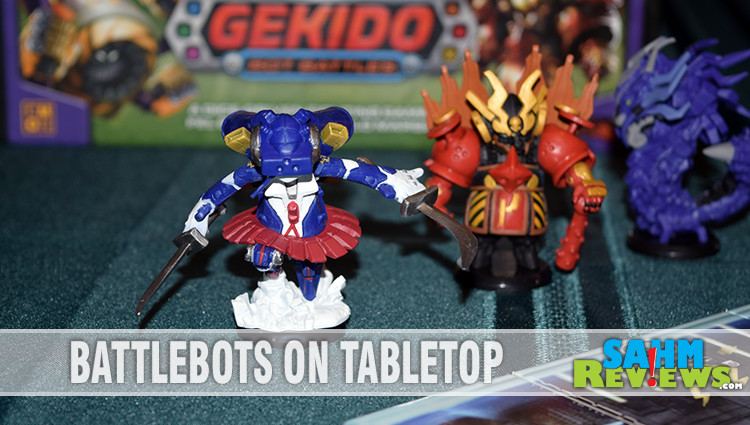 I think we are all guilty of enjoying something on television that has no redeeming value. Whether it’s a sitcom, drama, soap opera or reality show, they provide enough entertainment to warrant watching. There is usually zero educational value, and many times they can spawn arguments among family members when different sides are chosen. I guess you can say this for a lot of things on TV, right down to sports, game shows and politics!

Back in the early 2000’s, there was a show on Comedy Central that we didn’t miss an episode of. DVR’s were a brand new thing with much smaller hard drives than today’s units. So the fact that we chose BattleBots as one of our series recordings should tell you how much we enjoyed the series. If you’ve never watched, it’s a competition where teams build remote-controlled robots that battle to the death in an arena filled with fire, drills, ramps and more. Its five seasons were so revolutionary and popular at the time it even spawned a line of action figures and games. In 2015 ABC revitalized the series with two seasons featuring many of the still-popular bots from over a decade ago. Sadly it appears it only had two seasons left in it, as it wasn’t renewed for 2017.

Here’s another flashback. Do you remember the side-scrolling video games where two fighters also fought to win knockout rounds? Street Fighter, Double Dragon, etc. were quarter-suckers, and with the advent of more powerful home consoles it didn’t take long for them to be converted into 3D bashes. I know we enjoyed a couple different titles on our Xbox, and one that I heard a lot about but never got a chance to play (because it was on a competing system – PlayStation) was Gekido.

Gekido was unique in that it utilized well-known licensed rock songs as background music and featured highly-detailed 3D backgrounds. Also released in the early 2000’s, Gekido built a solid fanbase who sought to learn more about the characters’ backstories. Sadly, it appears it didn’t continue much further than this one PlayStation release. 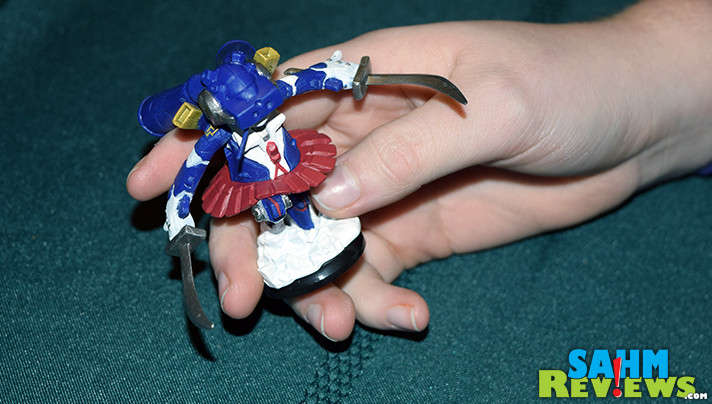 I had completely forgotten about the franchise until we ran across a board game by the same name at this year’s Gen Con convention in Indianapolis. Prominently demonstrated at the front of CMON‘s booth, what caught our eye was the pre-painted vinyl figures included with each copy. We were used to seeing CMON’s gorgeous miniature figures in such games as The Godfather: Corleone’s Empire, Masmorra: The Dungeon’s of Arcadia or Rivet Wars, but outside of their highly-popular Krosmaster Quest line we hadn’t seen a game’s miniatures provided pre-painted. 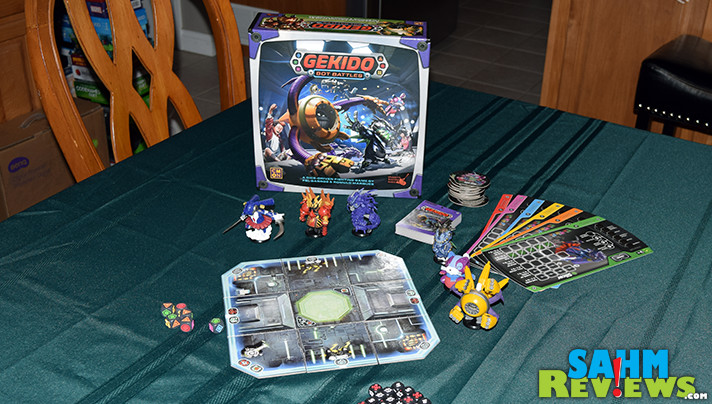 Gekido: Bot Battles combines the world from the Gekido video game with the mechanics of BattleBots. Up to four players choose one of the six included pre-painted bots to command in a free-for-all battle to last bot standing. Once a bot is chosen, that player receives a matching player board which serves as the bot’s control panel, takes target lock tokens matching all of their opponents and places their bot in any of the squares in the arena, except for the center one. 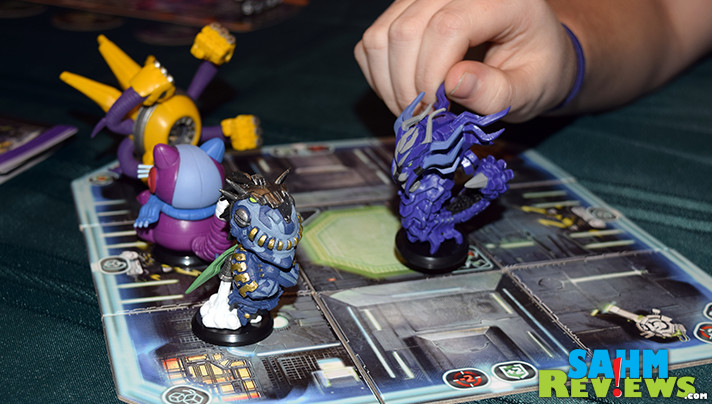 Gekido is played over a series of turns, beginning with the starting player and proceeding clockwise. Each turn is divided into three phases. First, you may move your bot one tile in any direction onto an open adjacent space. You must end your move on a space that is adjacent to another bot that is open to your attack. This is signified by your target lock tokens – they will be on the “ready” side if you haven’t attacked them recently. Once you complete an attack, you flip it over to the opposite side, where it remains until you flip all of your tokens. This prevents you from continually attacking the same bot from turn to turn. 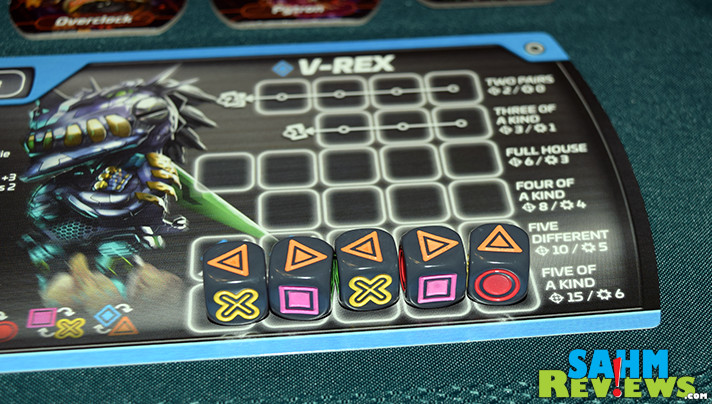 Once moved, you then attack a bot adjacent to you. This is done by rolling the included dice Yahtzee-style. Listed on your board are your possible attack types and the dice requirements for activating the attack. After your first roll you must declare which attack you are trying for and place any matching dice on your board in that section. You may reroll any unlocked dice up to two times to try to complete the attack sequence, and if successful, apply the amount of listed damage to your opponent. If you are unsuccessful in completing the attack, you instead receive damage, also listed on your board. 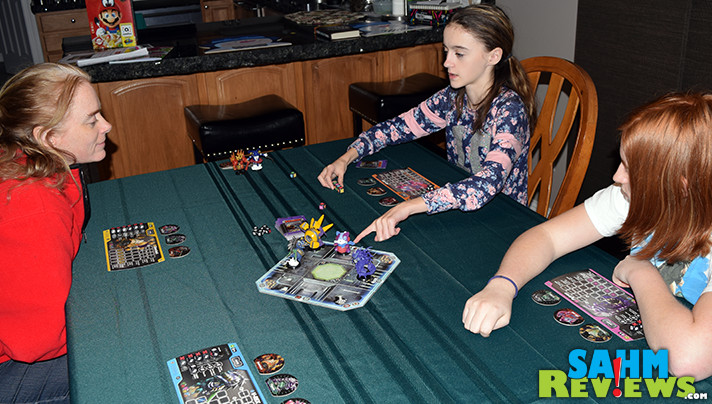 Damage is tracked on the left side of your board with additional dice. Each point of damage will require you to turn the dice to a one-lower number until the die is depleted. At that point you receive an upgrade. In fact, the more damage a bot takes, the more fiercely it fights! These bonuses allow you to draw Tech cards, permanently increase your armor, attack or defense, unlock an unused power or add a charge to the unlocked power! There’s nothing scarier than an injured (and mad) bot! 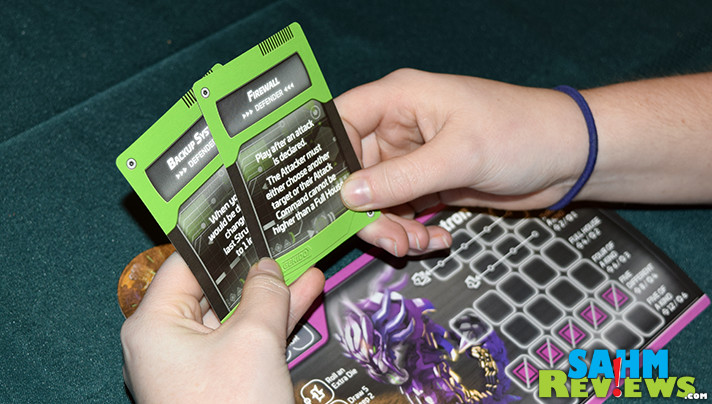 Complicating matters is the fact that the Gekido: Bot Battles arena is made up of tiles that award different abilities or bonuses. Depending on the tile you are standing on when you attack, you might receive an attack bonus, extra rolls of the dice or the ability to flip one of your dice to the opposite side. After each roll you also have the option of playing one of your collected Tech cards, further aiding your attack. 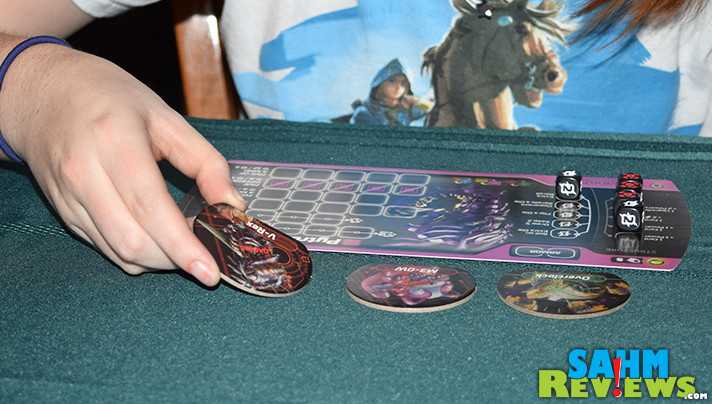 Lastly, if you didn’t move in the first phase, you can now move in phase 3. This allows you to tactically position your bot to keep it away from the other players. But with such a small arena, there really is no where to hide. If your bot loses its last structure die, it is destroyed and you are out of the game. The last bot standing is the overall winner of Gekido: Bot Battles!

While publisher-recommended for ages 14+, Gekido: Bot Battles can easily be enjoyed by kids as young as 8 or 9. Expect a game to last around 45 minutes with setup and teaching to be quick and easy. You can still find copies on Amazon for under $50 shipped, but a better recommendation might be to check out some of the other online board game retailers for holiday discounts.

If you like miniature-based games, there’s still time to enter to win a copy of CMON’s Godfather: Corleone’s Empire in this years 150+ Days of Giveaways! CMON has a number of exciting things in the works for 2018, so be sure to follow them on Facebook and Twitter so you’ll be among the first to know about their new issues!

Have you ever watched an episode of BattleBots?