We are coming up on my favorite time of the year. The snow is behind us and flowers are in full bloom. Pretty soon the kids will be out of school for the summer and at each other’s throats. The grass will need to be mowed more than once a week and the farmer’s market will be full of fresh produce. I look forward to (almost) all of these each year, but the real season is just beginning – convention season!

While many are sunning themselves on a beach or travelling to historic sites across the U.S., we prefer to road trip to some of the best game conventions in the country. Yesterday we returned from Geekway to the West, a quaint board game convention with 2,500 of our closest friends. Then in June we’ll ramp things up with a jaunt to Columbus, OH and the Origins Game Fair to play all types of games with 30,000 other people! And this year is the 50th anniversary of Gen Con, to be held in August in Indianapolis. We’ll soon see if they can finally break the 70,000 unique attendance mark. We’re already booked for them all!

One reason we love making the trek to these conventions is the possibility of being one of the first people to play (or even own) a brand new game. I stood in line to get a copy of Seafall last year, one of Gen Con’s hottest titles. My other stop was the booth of Cool Mini or Not. They do things a little different in that most of their big-ticket games are originally sold via Kickstarter.  There are always extra copies ordered to sell at retail and conventions, and they usually pay extra to have a pallet or two flown in just for these shows. When we picked up a copy of the brand new Masmorra: Dungeons of Arcadia, little did we know that not only would this be one of the first copies, it would be quite a while until the rest arrived in the U.S.

You might remember the saga of Hanjin from last fall. They are (were) a Chinese shipping company who ran into financial problems and suddenly declared bankruptcy, leaving ships literally stuck in open waters, full of freight, with no place to unload. With assets frozen, ports would no longer accept their cargo due to the fear of not being paid. Goods sat on these ships with worried customers wondering if they would ever get their product. Masmorra: Dungeons of Arcadia was one of the thousands of products in limbo. 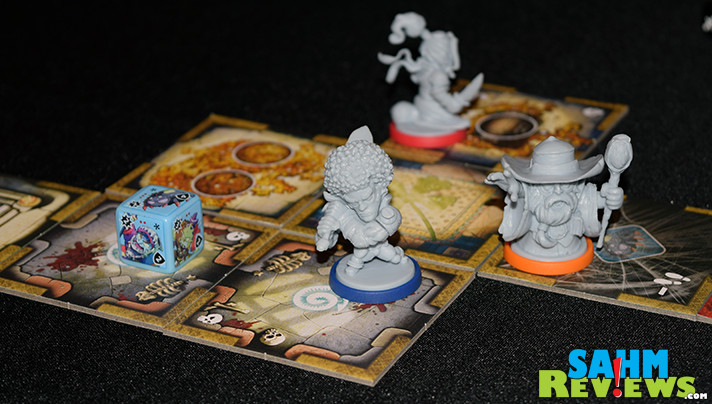 So I have held off telling you about this game because I know more than a few of our readers ordered theirs already through the Kickstarter campaign. Although there is no one to blame for the delay, I didn’t want to rub salt in the wounds of the backers. Instead we have quietly enjoyed Masmorra on our own with family and friends, while we waited for the rest of the world to get theirs. Nine months later it looks like nearly everyone has their orders. So let’s take a look at Masmorra and why we’re still playing it! 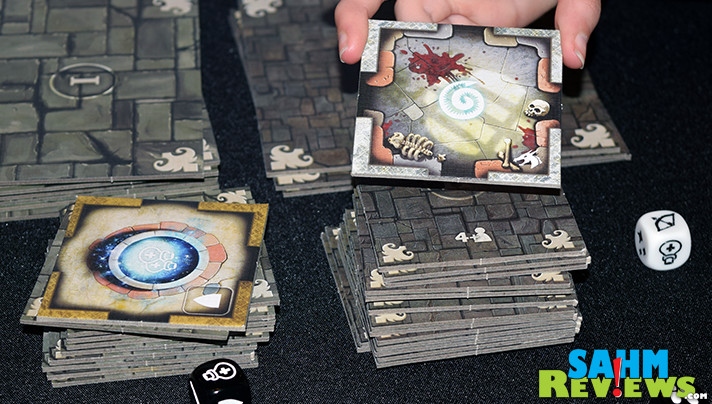 Masmorra: Dungeons of Arcadia falls into the game class typically referred to as a “dungeon crawler”. Much like Dungeons & Dragons of decades ago, each game of Masmorra has a completely different board, randomly generated via tiles. Unlike many other titles in this genre, no “Dungeon Master” is needed – everyone will take on the role of a character exploring the dungeon and moving the monsters by a predetermined set of rules. 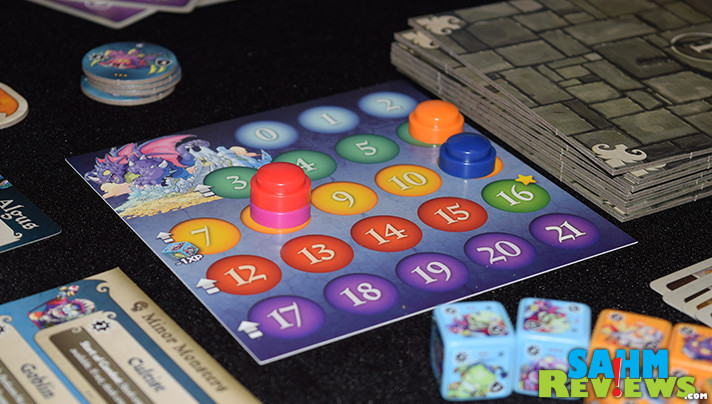 You might remember us talking about Krosmaster Quest, another similar game from Cool Mini or Not. Masmorra differs in that it isn’t a campaign-based team game. This is a winner-take-all competition to see who can collect the most points in the shortest amount of time. Up to five players take on the role of an adventurer, each with their own abilities and custom-sculpted miniature. 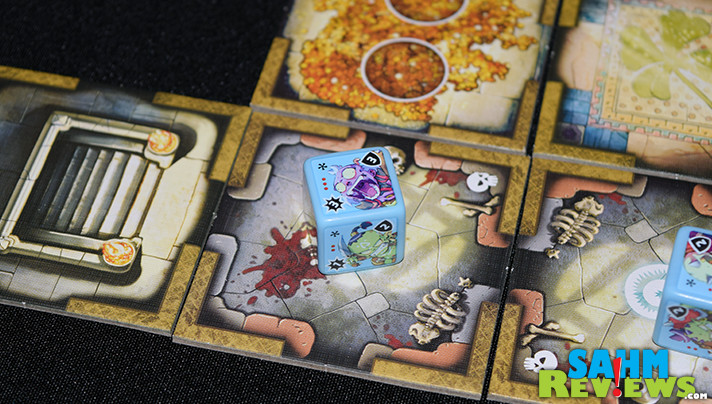 At the beginning of the game, the dungeon has not been created. It actually is created on the fly as players explore new areas and decide where to place the new dungeon tiles. Each reveal is accompanied by spawning treasures and monsters (and maybe traps), all of which have to be dealt with. 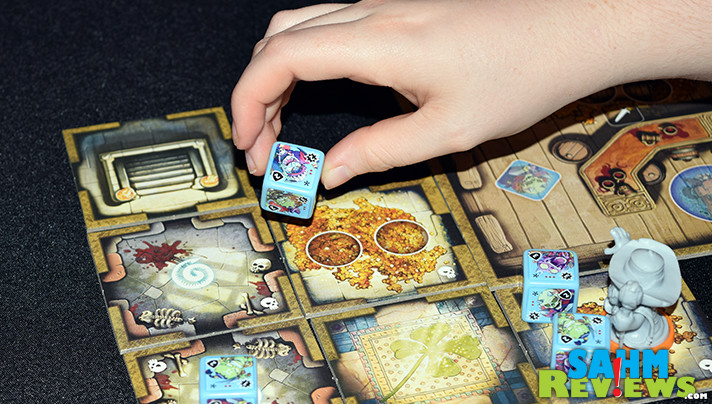 Uniquely, monsters are represented by dice in Masmorra. When a monster spawns, the corresponding die is rolled, revealing which monster appears in that area. The dice denotes the defense, attack and victory point values of the enemy and will vary depending upon the color of dice used. 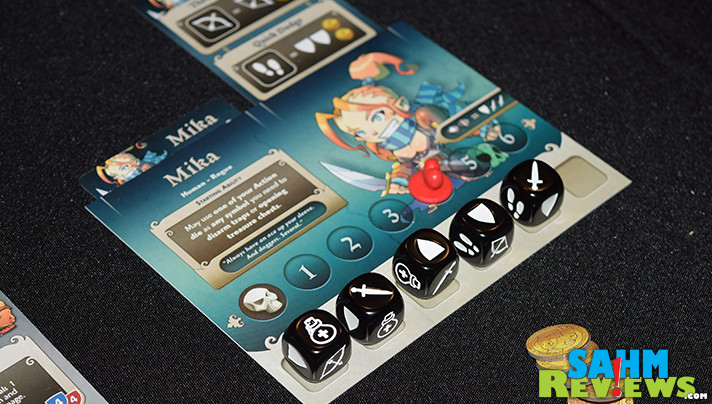 If you are in a room with a monster, you must fight them for one round. Survive the battle and you may move out of the room, open a chest or perform any other regular action. Victory points are awarded for defeating monsters, opening treasure chests, disarming traps and even exploring large rooms. 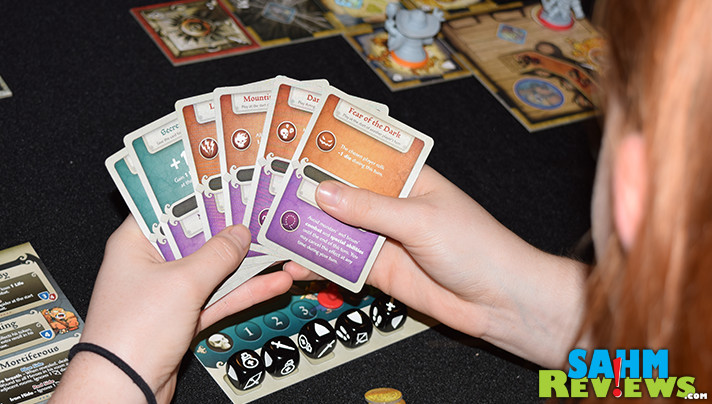 Opening chests and defeating monsters also rewards you with treasure cards that may be saved for end-game bonuses or used immediately to affect your or your opponents’ turns. Some may be helpful (like turning invisible and avoiding combat until the end of your turn) or mean to your opponent (steal a treasure card). Cards are varied and each have their full instructions on when and how to use printed on them. 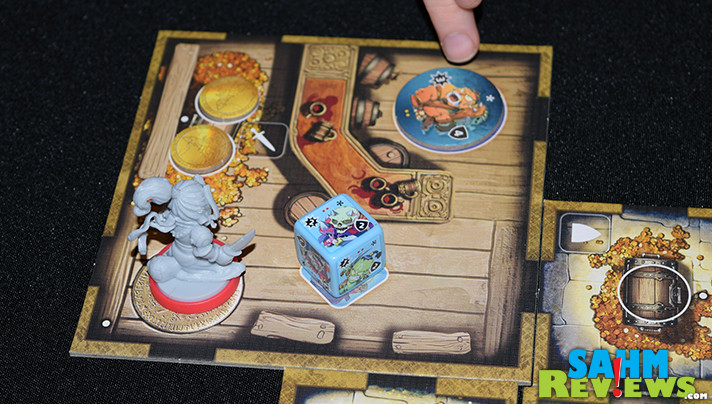 As you work your way through the dungeon earning victory points, your character will “level up”, allowing you to select new abilities and use them on subsequent turns. Each character can level up to four times, each time awarding something new. And yes, it is possible to die. The penalty for being defeated isn’t too great – you simply lose a treasure card, the rest of your turn and potentially some victory points (down to the beginning of your level). To win at Masmorra, you are trying to be the first player to reach 16 points, triggering the end of the game. Once that round is finished (so everyone has the same number of turns), the player with the highest total wins the game.

Getting a copy of Masmorra: Dungeons of Arcadia early was certainly nice, but after playing it for months I’m starting to come down with “Kickstarter Envy”. Those that originally backed the game received so much bonus content in the form of extra heroes and upgraded components, as well as the ability to inexpensively purchase additional add-ons, that I’ll definitely pull the trigger earlier so I don’t miss out. Even if I do have to wait a little after convention season to get my copy. Hopefully these extras will be available at Gen Con this year so I can add a little to my copy.

Although advertised for a higher age level, Masmorra: Dungeons of Arcadia is perfectly appropriate for ages as young as 7 or 8. The chibi-styled artwork is fantastic and there is no direct combat between players. You are all trying to survive the dungeon, you just want to be the one who does it best! And if that means sending the monsters towards your opponent, well…too bad for them!

Copies of Masmorra are currently on Amazon for under $50 shipped and may also be purchased directly from Cool Mini or Not on their website. 2017 is looking to be another banner year for new games from CMON, so make sure you’re following them on Twitter and Facebook to see what they’re bringing to this summer’s conventions!

What do you think about the monsters in Masmorra being represented by dice?

Tags: board games, CMON, Cool Mini or Not, RPG