Most of the games we own that pit one player against everyone else are dungeon-crawlers with elaborate boards and plastic miniatures. They come in all styles and we continue to enjoy Folklore: Affliction and Masmorra: Dungeons of Arcadia when time allows, even though they technically don’t have a person playing the bad guys. We’d play them more, but the setup time needed can take as long as a game itself. And don’t even get me started on our Gloomhaven campaign…

This past Spring we discovered a new card-based game from Silverclutch Games called “Beneath Nexus”. Before I get into an overview of how it’s played, I want to point out the oversized cards used for much of the game. Do you remember playing with comically-oversized playing cards that were probably designed for older players whose eyesight was less than optimal? That’s how large the cards in Beneath Nexus are! A full 4″ x 6″! 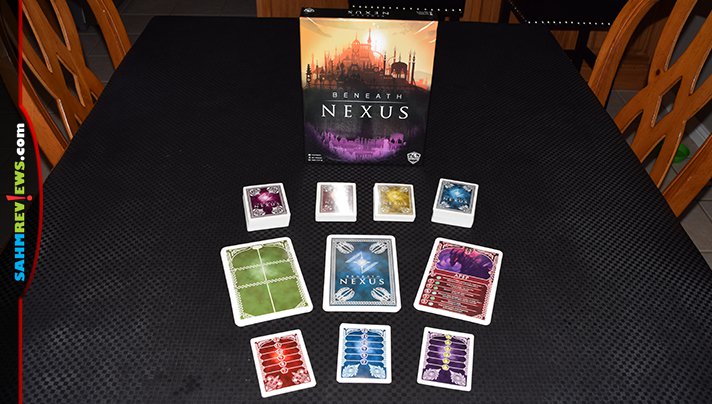 Beneath Nexus is set in the city of Nexus, a ruined city with a dungeon beneath it. It was corrupted by the Blight Lord, who will be played by one player. The rest of the participants will be trying to reclaim the city from the Blight Lord by defeating their monsters and the Lord himself. Only by surviving two encounters with his minions and then the final fight with the Lord will the Heroes be successful. 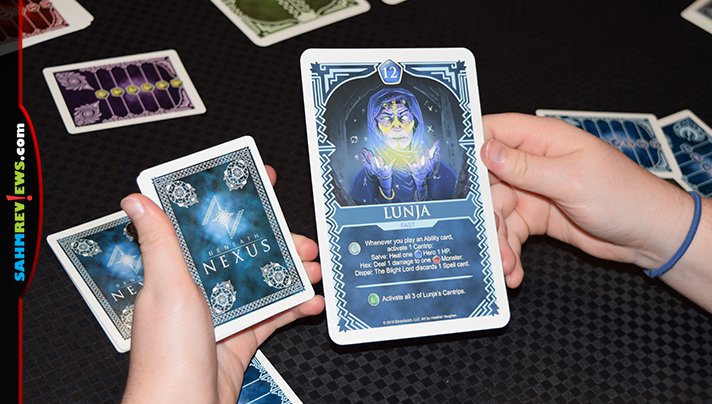 From the four different Blight Lord character cards, the person playing this demon selects one and takes the corresponding deck of 10 Spell cards along with the deck of 34 Monster cards. These ten unique Spell cards are combined with 20 standard Blight Lord Spell cards, shuffled and placed face-down. A number of Spell cards are drawn into the Blight Lord’s starting hand equal to the number of opponents plus two. 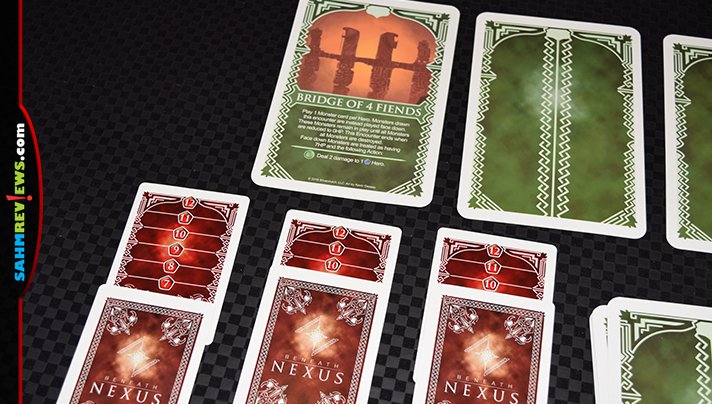 All other players will choose a Hero character from the pool of six and take the corresponding deck of 12 Hero Ability cards, which are also shuffled and placed face down. A starting hand of three cards are drawn from the associated deck for each player. Heroes also receive a blue dial to track their hit points, which begins at twelve. Oversized Dungeon cards are also shuffled, with three being dealt face-down to the center of the play area. The first encounter of Beneath Nexus is ready to begin!

At the beginning of the encounter, the Heroes will turn over one of the three face-down Dungeon cards. The Blight Lord player will set up the encounter according to the rules on the revealed card. Monster HP is tracked by jewel cards and the value is determined by the starting and maximum HP shown at the top of each Monster’s card. For the most part, the way the Heroes progress to the next stage is to reduce all monsters’ HP to zero. Some cards will have special conditions that once met will also successfully end the encounter. 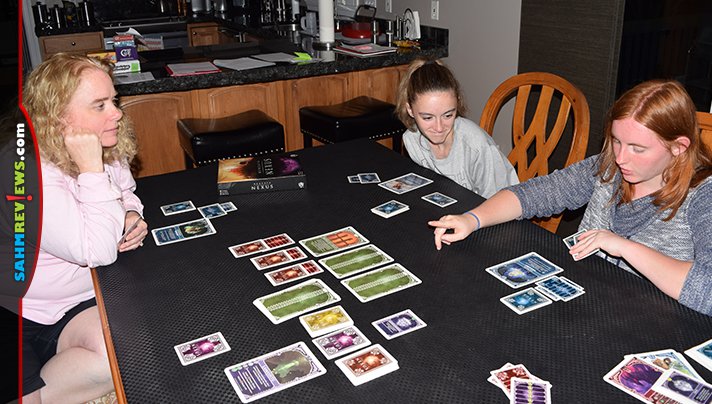 During each round of the encounter the Blight Lord will take one action against each hero by playing cards from their hand and then drawing back up to their hand limit at the end of their turn. Heroes then get to take turns in order of their speed and perform one action. The action choices are listed on the Hero’s character card and additional Ability cards. Some relics may also give heroes additional actions! Heroes also have Reaction cards that may be played in response to any other player’s action or reaction. These are not limited to being played on the owning player’s turn – they can be played at any time! After taking one action, the hero draws another Ability card to use on a later turn, keeping in mind the six card hand limit. 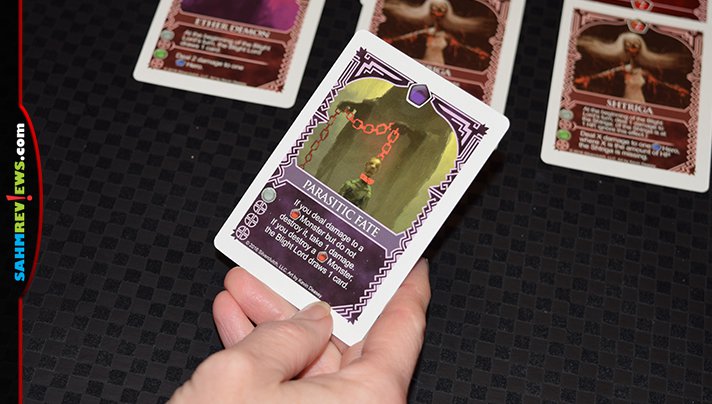 If a hero is reduced to zero HP, they are considered fallen and will sit out the rest of the encounter. If the team is successful in completing the encounter, they are revived with 6 HP to use in the next encounter. Additionally, each player also gains an additional Ability card and a Relic. Beware – some Relics are cursed! A second encounter is started in the same manner as the first with the Blight Lord spreading three new Dungeon cards to the center of the play area. The encounter is played in the same manner, and if completed successfully by the heroes, allows them to begin a final encounter against the Blight Lord. 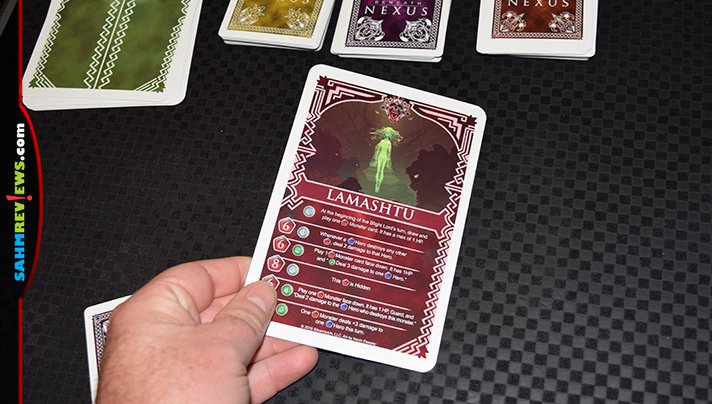 This last battle begins with the Blight Lord turning over their character card to reveal a monster side with new abilities. Each ability has a HP jewel next to it denoting the Lord’s overall health when summed up. To balance difficulty, the Blight Lord only has access to the main passive ability and then a number of abilities starting from the top of the list and moving down a number equal to the number of opposing heroes. This will also affect the Lord’s HP – they’ll only have the sum of all active abilities. If the heroes are able to reduce the Blight Lord’s health to zero, the whole team wins! If all of the heroes are fallen, the player acting as the Lord is the winner of Beneath Nexus!

Beneath Nexus supports 3-6 players and you can expect a typical game to last at least an hour. Longer than most card games, but much shorter than comparable miniature-based board games. You will also find it to be much more affordable. Currently around $20 on Amazon, you may also find copies of Beneath Nexus at your local game store.

If you’d like to find out more about Beneath Nexus or the company behind it, check out their website or follow Silverclutch Games on Facebook or Twitter. Both of our daughters have discovered interest in playing RPG’s as of late, so we’ll be reading up about their Openworld role-playing system to see if it is the type of RPG experience they’re looking for!

Do you have a favorite dungeon-crawling game?