Card battle games are one type of game that we don’t get to play very often. Not because we don’t own many, but because they typically only support two players. We’ve enjoyed many hours of Mage Wars Academy, Castle Assault and Hero Realms. And while some of them include alternate rules for more than two players, they seem to fall flat when compared to the head-to-head experience.

We recently discovered Witless Wizards by a new-to-us company, Drawlab Entertainment. Their take on the card battle genre not only supports two players, it can be played by three or four without taking away from the experience! In fact, I would say it is best played with the full compliment of four since it gives you more flexibility on who to target when you attack! 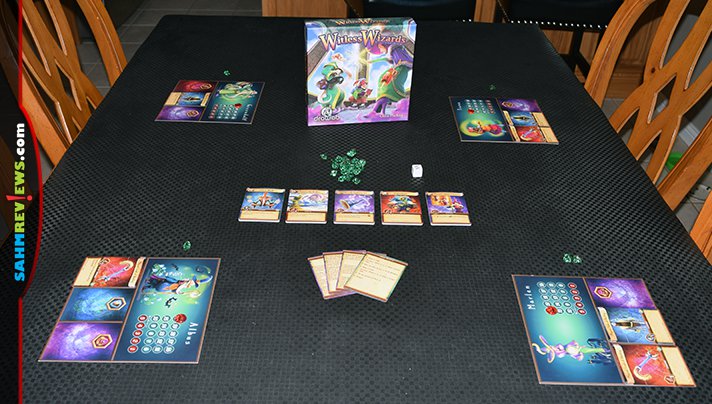 Inside the Witless Wizards box you will find four character boards, five equipment card decks of eight cards each, standard equipment cards, counters, gems and a custom battle die. Each player receives a character board and takes one of the stamina counters and places it on the “20” space of the board’s track. This is essentially your character’s “life”, and if reduced to zero, causes you to be removed from the game.

Once a first player is determined, all players will also receive predetermined equipment based upon their turn order in the game. Three of the five equipment decks are chosen for the game and are shuffled into one large deck. The other two equipment decks are returned to the box and will not be used for the current game. The shuffled deck is placed face-down in the center of the play area along with the gems and battle die.

A player’s board not only tracks their stamina (life), it serves as a place to show which pieces of equipment are currently worn. Three spaces allow placement of cards that are either “offensive equipment”, “defensive equipment” or “special equipment”. Any starting cards you receive are equipped into those spaces and will remain there until replaced by a newly-gained card. 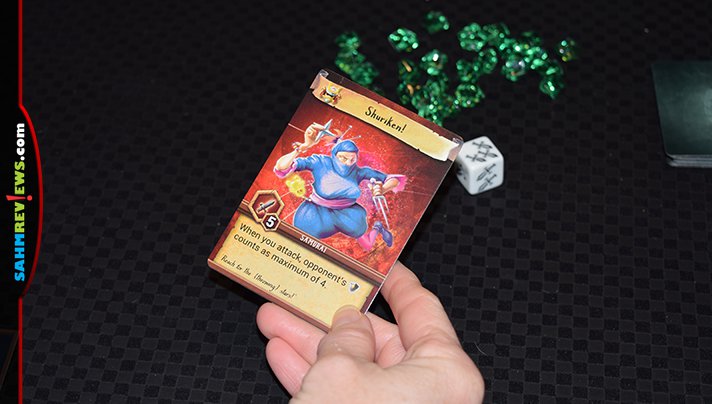 The goal of Witless Wizards is to be the last wizard standing after all other players have had their stamina reduces to zero. On the active player’s turn, they will draw one card from the top of the equipment deck and decide whether or not to keep it and place it onto their board. If they don’t want the card, they will choose another player to give it to, who must equip it by discarding any other equipment in the associated space and replacing it with the new card.

The same active player then will draw a second card and either keep it or pass it to another player – the opposite of what they chose to do with the first card. Additionally, at any time the player may spend one of their collected gems to draw another card if they don’t like the one they drew. One of them must be discarded before either playing one or passing to another player (cards aren’t held in your hand, they are drawn each time). 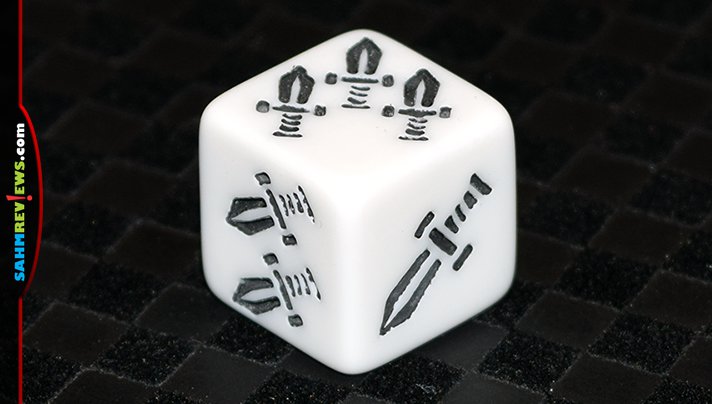 The final part of each player’s turn is the battle. You must attack one of your opponents (your choice) and roll the battle die. Add the result from the die to your attack value shown on your equipment cards and compare it to the defense value of the player you are attacking. If the attack is greater, you deal damage to that player equal to the difference (they will move their stamina token down their track). If equal or less, nothing happens. 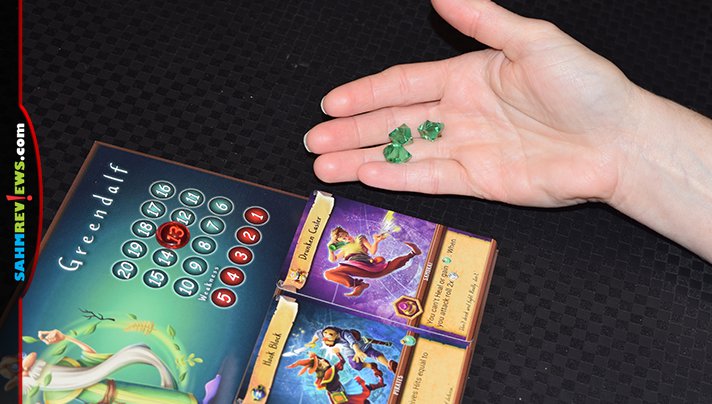 If you are weakened by an attack and your stamina is reduced below five, you may spend gems to raise your stamina back up on a one-for-one basis. As the last part of your turn, receive a number of gems equal to the total number shown on equipment cards in your play area. The next player in clockwise order then takes their turn. At the end of any turn, if there is only one player left, that person is crowned the winner of Witless Wizards!

We found Witless Wizards to be very easy to learn and play and think the recommended age of 14+ is way off. This can be easily enjoyed by children as young as 7 or 8! You’ll find copies available on Amazon or at your favorite local game store! If you’d like to find out what else Drawlabs Entertainment offers, be sure to check out their website or follow them on Facebook or Twitter!

What is your favorite card battle game?