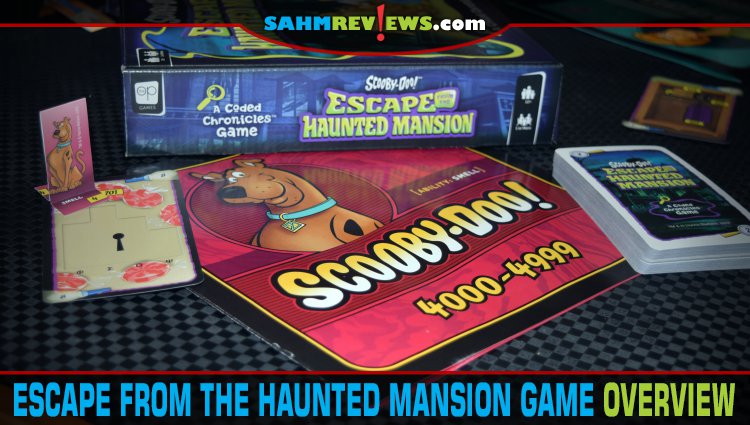 I’ve been doing a lot of reminiscing lately about movies, TV shows, cartoons and toys from my childhood and young adult years. It could be the result of excessive hours locked up inside or maybe it has something to do with the realization that Madison is getting ready for college. It’s more likely because we’ve been watching Cobra Kai and playing games about Jaws and The Princess Bride A Battle of Wits. This past weekend, we added another iconic character from our past to that list: Scooby-Doo! The Op sent us a copy of Scooby-Doo! Escape From the Haunted Mansion, an escape-room game that felt like a cross between Thames and Kosmos’ EXIT series and Sherlock Holmes Consulting Detective. I love escape rooms, but one with a Scooby-Doo theme is such a bonus. 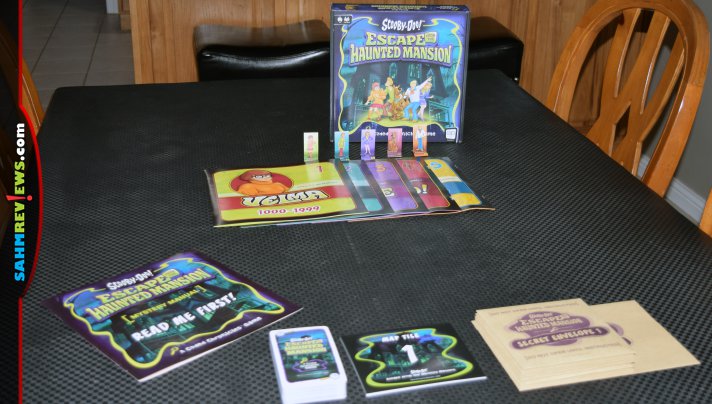 As with any escape room game, you have to be very careful with the setup process. You won’t want to reveal anything before you’re supposed to. Scooby-Doo! Escape From the Haunted Mansion is a cooperative game where everyone is working together to solve the mystery. There are five characters and related narrative books, but nobody is “playing” any one. Instead, divvy the narrative books up between the players so everyone can participate in looking up the results. Place the map tiles and clue cards face-down in numerical order. Do NOT shuffle nor look at the bottom of the stack! Finally, place the standees and the secret envelopes to the side. 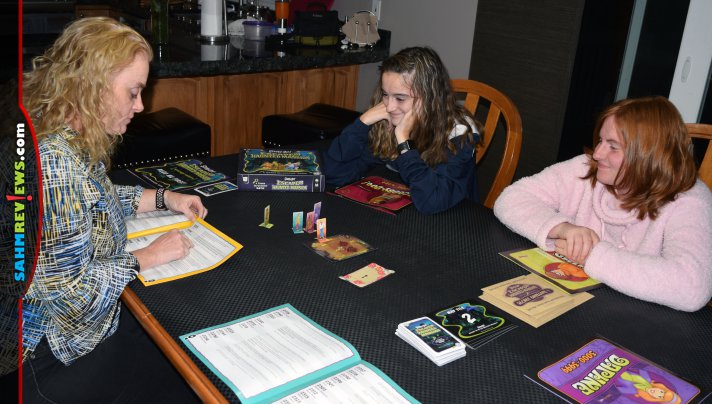 I feel it is important to note that we recognize the importance of providing a spoiler-free article. We’ll do our best to present things carefully while still outlining the details of Scooby-Doo! Escape From the Haunted Mansion. 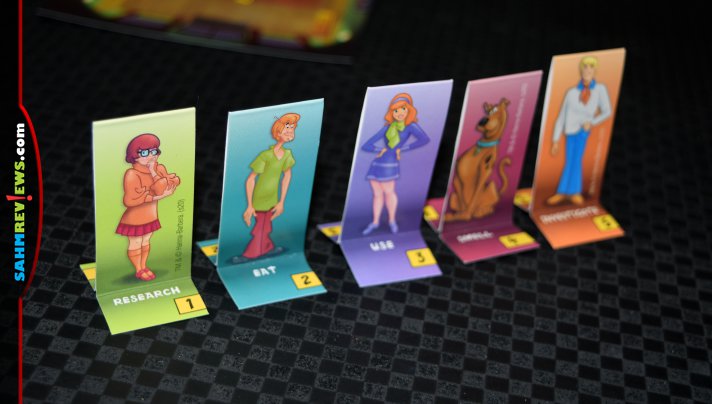 Each of the characters has a different ability. Fred investigates while Velma researches. Daphne’s ability is to use something. Shaggy (naturally) eats and Scooby uses his sense of smell. Any character may move into any room that has an unlocked door, but don’t forget that it’s a team game and nobody is in charge of a specific character. There isn’t a set order for the characters to take actions. 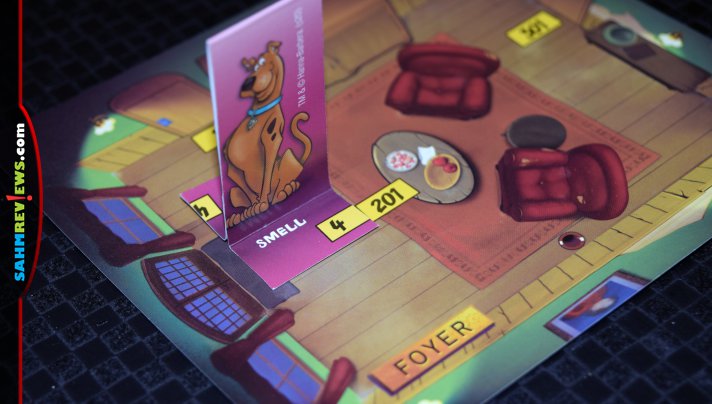 Each character stand has a unique number (1-5) which will connect with a four-digit code to uncover more information. As an example, if a door has a number 123 on it and you have Velma research the door, you’ll look up #1123 in Velma’s Narrative Book. Likewise, Scooby would smell the clue in his book under #4123. There are no penalties for using character abilities so have them interact with anything and everything. 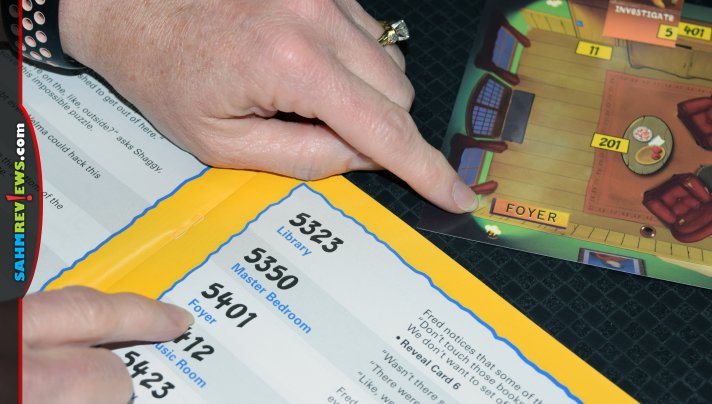 When you go to look in the book, be sure to double check that you’re in the right place by making sure the number on tile matches the location listed next to the clue in the narrative book. If you happen to find something with only two digits then you need to find a single digit item to combine with it. A door and a key may need to be connected in order to learn more about them. Cards that reflect a blue board are item cards that you’ll carry along until you’re instructed to discard them. These might come in handy when you’re trying to get more information on a clue that only has two digits! 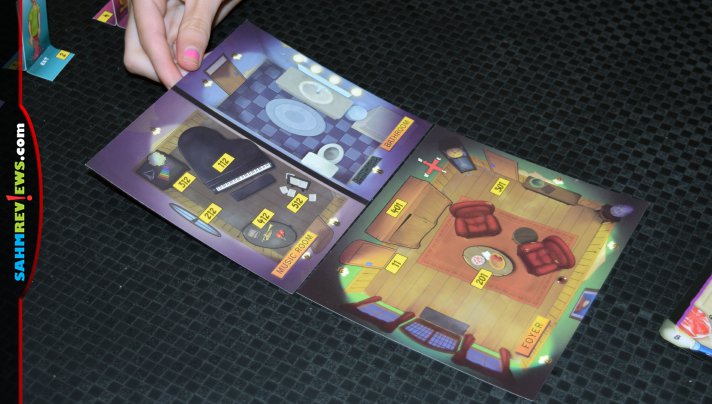 As you progress through the game, you’ll be instructed to place map tiles in specific places. These tiles gradually reveal the different parts of Lord Fairmont’s Mansion. Each tile has only one location and one orientation which will be outlined for you with respect to the rooms you already have discovered. 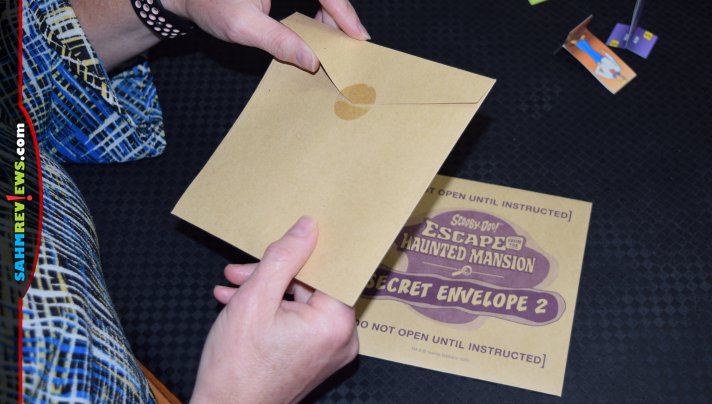 You’ll be able to solve Scooby-Doo! Escape From the Haunted Mansion without accessing any outside information. Throughout the game, you may be asked to remove or reveal cards, add map tiles or open secret envelopes. Be sure to carefully read those because misreading something has the potential to spoil the game. 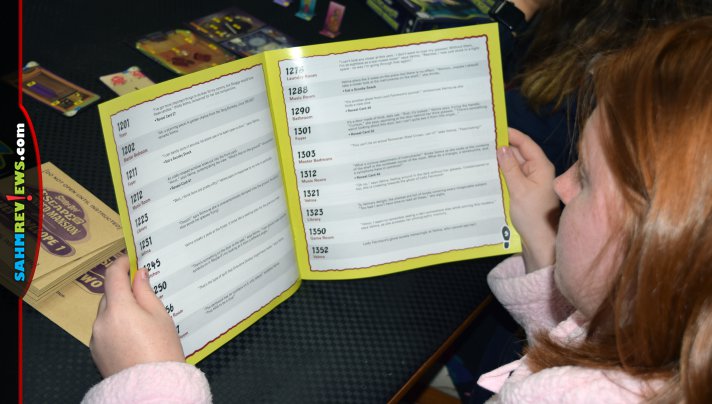 Everything you need is contained in the various books and envelopes. If you’ve tried to solve a puzzle and entered the wrong number, the Narrative Book will instruct you to mark off a Scooby Snack. Errors as well as hints impact your rating on how you did when you finally figured it all out.

Scooby-Doo! Escape From the Haunted Mansion is only good for one play through, but you can put the cards and envelopes back in order and pass it along to friends or family to use. If you’re ready to become one of those “meddling kids”, check on Amazon or look for it wherever you purchase games locally. Be sure to follow The Op on Facebook and Twitter. One day you may discover details about other Scooby-Doo products and the next time news about their party games!

Which Scooby-Doo character is your favorite?

13 comments on «Scooby-Doo! Escape From the Haunted Mansion Game Overview»