Nostalgia is a powerful driving force. I was just talking to my parents the other day about the cycle of toys and when they become a long-term collectable. Quite often the toys that rise in collectability are the same ones that were popular when a new generation finally has disposable income. Think about that for a minute. As an adult, when you finally had some extra money to buy yourself something that had an emotional meaning, what did you buy or do? Probably something from your childhood like a game or some Hot Wheels. Other people relive their youth through music. When I attended a Journey concert, you can probably guess what the average concertgoer’s age was. Pretty close to mine. The Hood Internet is killing it with their 3-ish minute mashups of all the popular songs from a specific year. Peacock Network decided to reboot Saved By The Bell and Netflix gave new life to Karate Kid with the knock-down-awesome series, Cobra Kai. So while many are fanatics of The Princess Bride, it hits home especially well with my generation. I was beside myself to learn that there’s a game about the poison-cup scene. Sparkworks built that classic I-think-you-think-I-think mentality into a card game and appropriately named it The Princess Bride: A Battle of Wits. 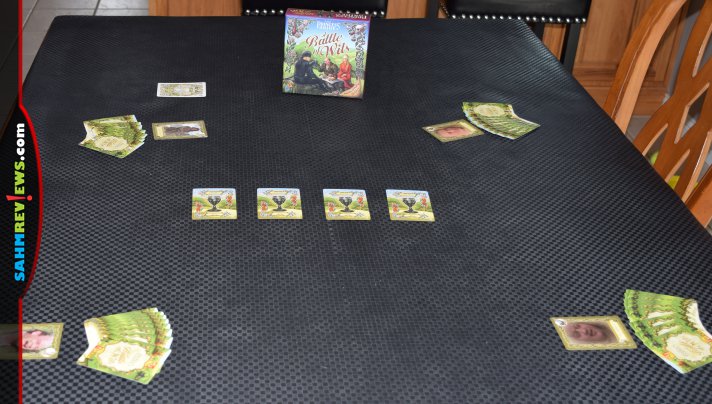 Much like the simple setup on that hillside in the movie, there isn’t much to do to set up this card game. There are 7 wine/poison cards per player, 12 Sicilian wine/poison cards, 12 character cards, 10 goblet cards and a timer card. One goblet card per player is set in a row in the center of the table, arranged alphabetically. Each player (up to 10) selects a character then takes the related win/poison cards. As noted in the rulebook, you’ll adjust the size of your hand based on the number of players. Select a dealer to go first then give that person the timer card. The dealer shuffles the Sicilian cards and deals one to each player. The remaining Sicilian, Goblet and Character cards are all returned to the box. 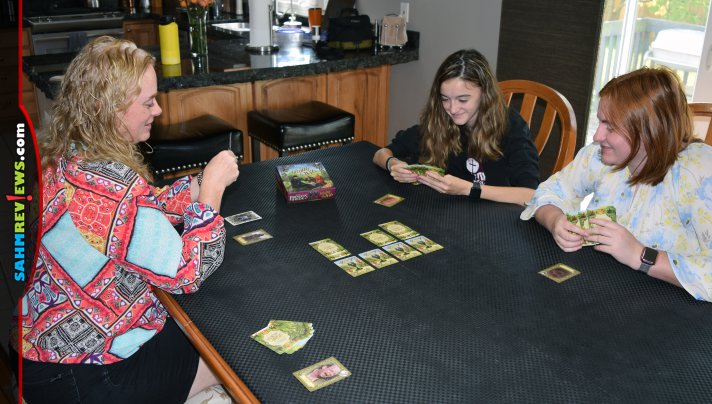 The player to the left of the dealer will go first and players will follow in clockwise order. One card will be placed on either the top of the row or the bottom, aligned with a specific cup. There are two options for placing a card: contents (above the row) or bidding (below). 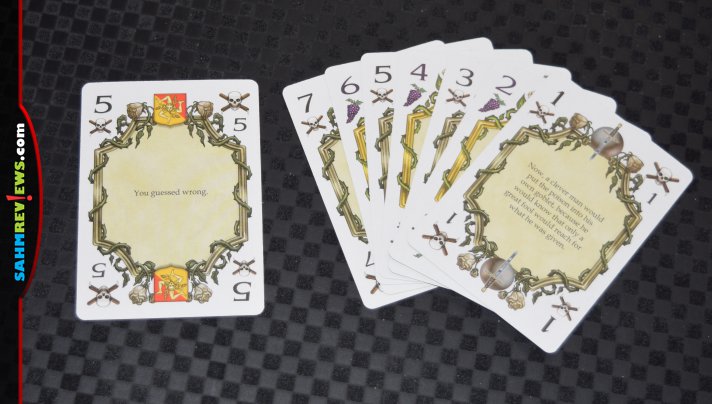 Your hand of cards consists of a mix of wine and poison and these are what you’ll add to the goblets in the center.  At the end of each game, all players will select a cup to drink from… each person is hoping their choice consists of mostly wine! 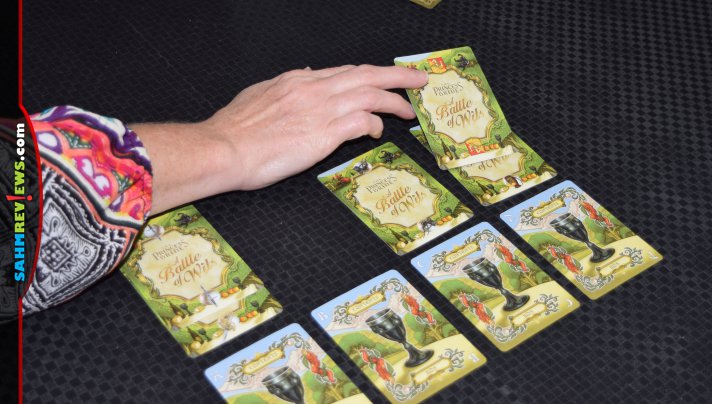 On your turn, you’ll place either a Character Wine/Poison card or a Sicilian card. Place it face-down above the goblet (contents side) means you are secretly adding that card’s value to the mixture. Since the cards represent various values of wine or poison, you’ll know how much you added, but will have no idea what your opponents did. It’s important to know that you are immune to your own poison cards so there’s that to factor in also. If you’re fairly confident that a goblet will contain mostly wine, you may opt to bid to take a drink from that one. To do this, you place a card face-down below that vessel in the row.

Depending on how difficult a game you want to play, this next part is optional. When the play makes it around to the dealer, flip the Time card. Whenever the day side is flipped up, reveal the face-down Contents card closest to each goblet. This gives you some hints about the concentration of wine to poison. 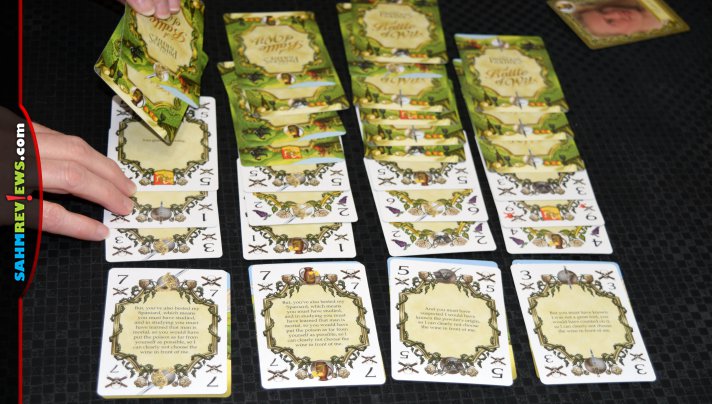 After everyone has played all their cards, flip each stack of bids to reveal the information. The players who bid the most on each goblet will win the right to drink from it. Maybe. Everyone has to drink from one and there’s only enough for each player to have one. So if a player has the highest bid on two or more, then they get to select which one they want to take. The others will go to the next highest bidder.

After everyone has their own glass, it’s time to drink! One goblet at a time, reveal all the content cards. If there’s more wine than poison, the player lives. If the opposite, then the player dies and flips their card to the poisoned side. The girls referred to this as the wheelbarrow side. You can have more than one winner and leave it that way, or play another round and see who else you can kill off!

Which character, scene or phrase from The Princess Bride is your favorite?