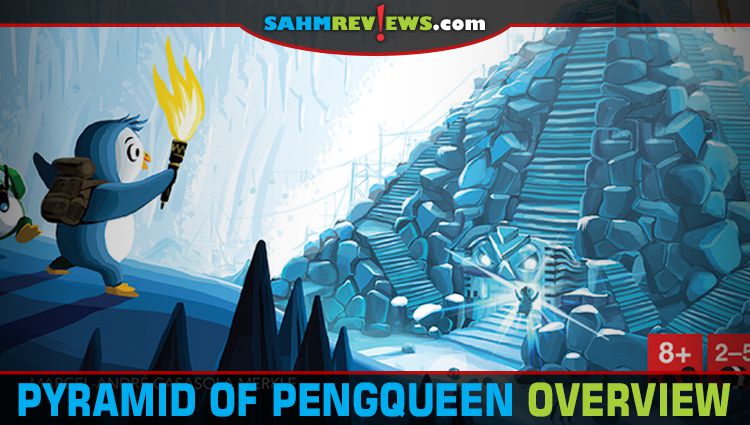 Continuing on with the topic of games that we recommended in our annual Holiday Gift Guide but hadn’t had the opportunity to show to you in its full glory, we’re excited to give you a peek at Brain Games Publishing‘s Pyramid of Pengqueen. We selected this title for two reasons. First, our youngest daughter is all about penguins. Toys, plush, pictures, you name it. It is the first section of the zoo we visit, and the last. If it has anything to do with penguins, she wants it. 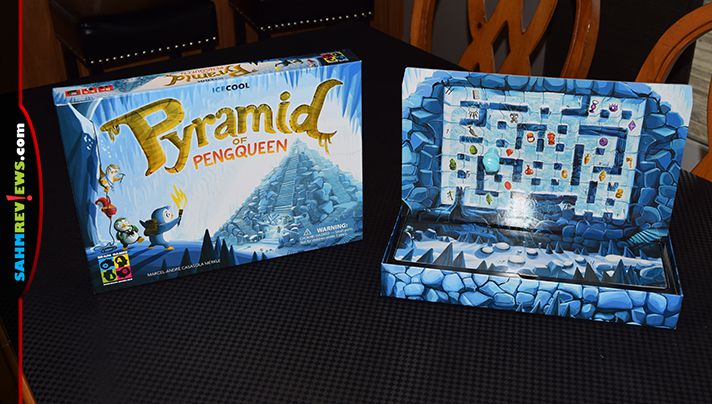 Our other daughter has always been fascinated with magnets. At first glance you might wonder what magnets have to do with a board game. That’s a feature unique to Pyramid of Pengqueen! The game uses magnetic pieces that attach themselves to a magnet-friendly vertical board! We don’t have many games in our collection that feature magnets, the only one that immediately comes to mind is Hearts of Attraction. And that one is ALL magnets!

Pyramid of Pengqueen is a one-vs-many game where one player takes on the role of the mummified penguin Queen while up to four other players are penguin “tomb-raiders” vying to be the first to collect five different treasures. It may sound like this is a typical semi-cooperative game where players work as a team to beat the single player. In this game that really isn’t the case – there is only one winner. But if the Pengqueen gets the upper hand, you may find yourself working with your opponents to make sure the mummy isn’t the overall winner! 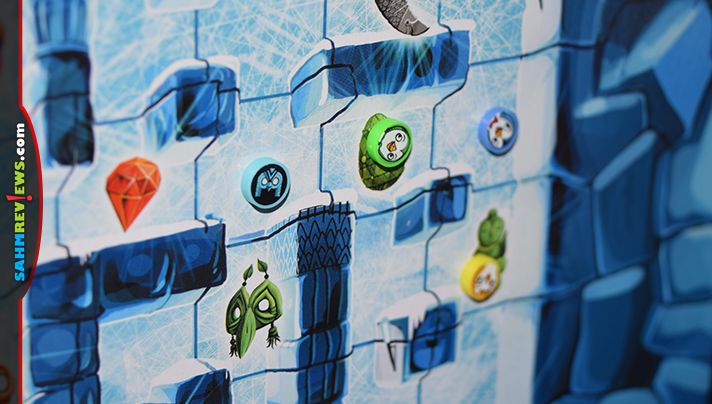 Game setup is very quick with the box becoming part of the board you’ll play on. It acts as a stand, holding the magnet-friendly board in a vertical position. This allows for each side (mummy and penguins) to have their own side of the board without worrying about the opponent peeking at their side. Each penguin places their color matching starting disc on the starting square at the top of the stairs, while the Pengqueen places their pawn on the sarcophagus on their side of the board with a matching disc immediately on the opposite side. Yes, this means the penguins will always know the position of the mummy since when they move their pawn the magnetic disc moves along with it! 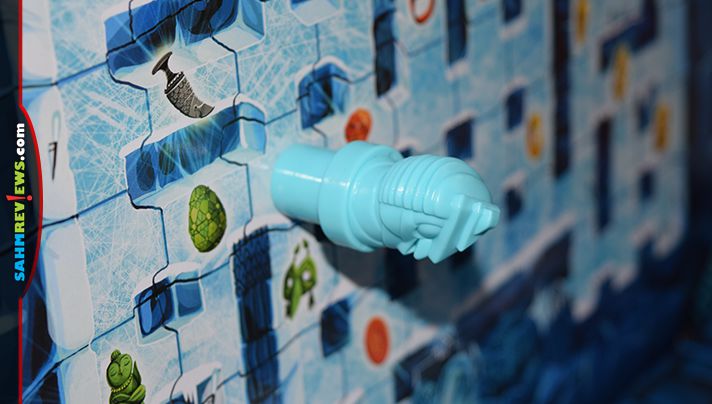 Penguins are also dealt one each of the five different colored treasure cards. These depict the treasures they are assigned to collect. They also receive a pool of five custom dice, while the mummy has but a single die. Play begins with the player immediately to the left of the mummy and continues clockwise around the table.

On a penguin’s turn they will take a number of steps in order. First, they may decide to reset their dice. This means taking any dice that previously had been rolled as a mummy and adding them to the dice pool (this will make more sense in a minute). Next, the current player will roll all of the dice and examine the results. Any that are rolled as a mummy are set aside and cannot be rerolled. If the player is happy with the results, they may move on to the next step. Otherwise they may reroll all remaining dice in the same manner, setting aside any mummy results. This may be done as many times as the player wishes as long as they have dice to reroll. 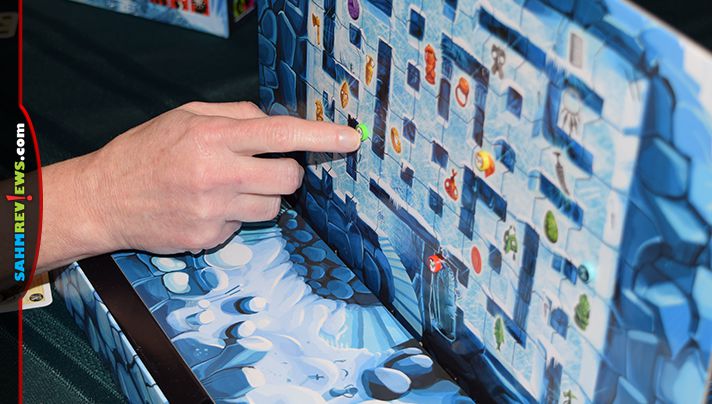 Now it is time to move and your choices are determined by the remaining dice results. Choose one of the numbers (or the arrow) on the dice and move your penguin that many spaces. You may move in any direction, including back and forth, but must move the full amount of the chosen die. If you choose an arrow you will move as many spaces as possible in one direction until you encounter an obstacle, ending your move.

If a penguin ends their turn on one of the symbols matching their treasure card, they may turn over that card for everyone to see. Revealing all five treasure cards is how an individual penguin wins the game, but it also reveals your current location to the mummy!

Once all penguins have taken a turn, it’s the mummy’s turn. They’ll roll their one mummy die and add the result to the number of mummy results the penguins have, giving them the total number of spaces they may move. If the Pengqueen moves through a space with a penguin on it, the disc will be captured (it actually flips in place magnetically!) and that penguin loses a life token. Their disc is then sent to the sarcophagus for their next turn. If a penguin ever loses all three of their life tokens, they are removed from the game! 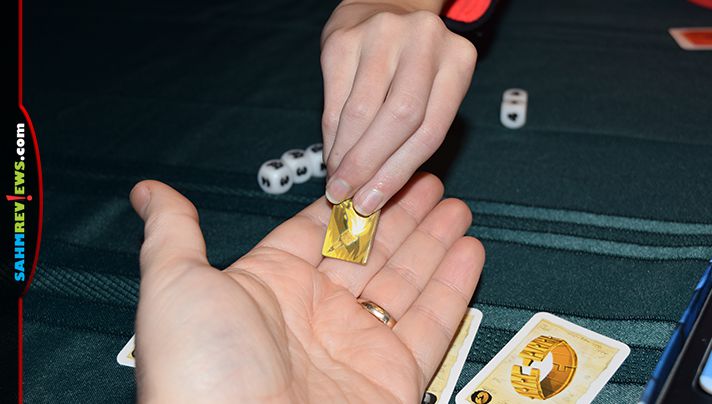 As a team, the penguins must decide how far to push their luck. Their mummy dice add up and give them fewer options in which to choose from when moving. As mentioned above, the first step of each penguin’s turn is to decide whether or not to reset the dice. If they elect to, the dice are returned to the rolling pool. BUT, the Pengqueen gets to move right away without rolling their own die. So if the penguins are unlucky in their rolls, the mummy will be moving quite often and much further than normal! 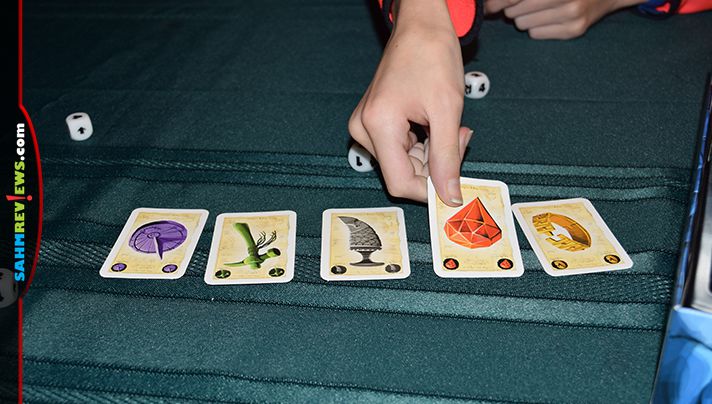 Turns continue around the table until either one penguin is able to collect (reveal) all five of their treasures or the Pengqueen collects a number of life tokens determined by the number of players. In either case, expect a game of Pyramid of Pengqueen to be completed in 30-40 minutes tops. Plenty of time to play more than one round!

Pyramid of Pengqueen is a very family-friendly hidden-movement game that will appeal to a wider audience than similar games like Inkognito or Last Friday, if only because of the adorable artwork. And at under $30 on Amazon, you can see why it was a shoe-in for our Holiday Gift Guide!

You probably know of Brain Games Publishing from their first title (and mega-hit) Ice Cool. Since its introduction they have expanded their product line immensely! Take a look at their full lineup over on their website and follow them on Facebook or Twitter to find out what they have up their sleeves next!

Have you ever played a game that uses magnets?