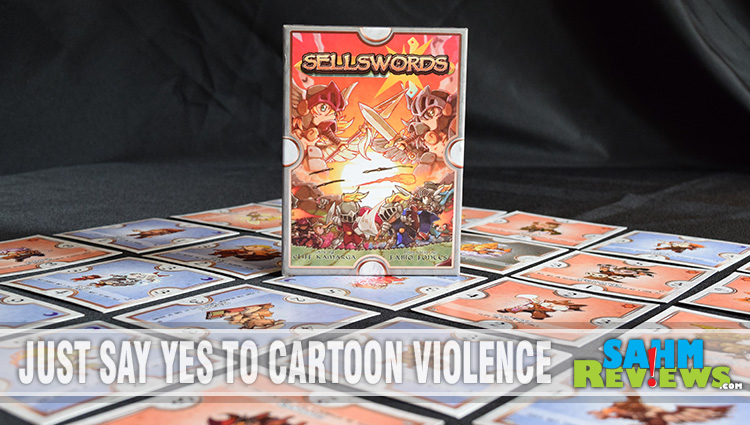 A Big Strategy Game in a Little Box

I’ve complained before about finding the right number of players for a game. We’re a family of four and there is no dearth of titles designed for that many players. I recently told you about Pirates vs. Pirate when I was looking for a game that maxed out at three participants. But what can we grab when there is only two of us and we both want something out-of-the-ordinary? We found Sellswords from Level 99 Games to be a great solution.

I would best describe Sellswords as an abstract strategy game in that you are vying for control of the board by color (like Go or Othello) but with the addition of cards that have varying values and abilities. The game includes 50 square “Hero” cards (all different), but only 24 are used in any game. This randomness alone makes for a ton of replayability and surprises at every turn. 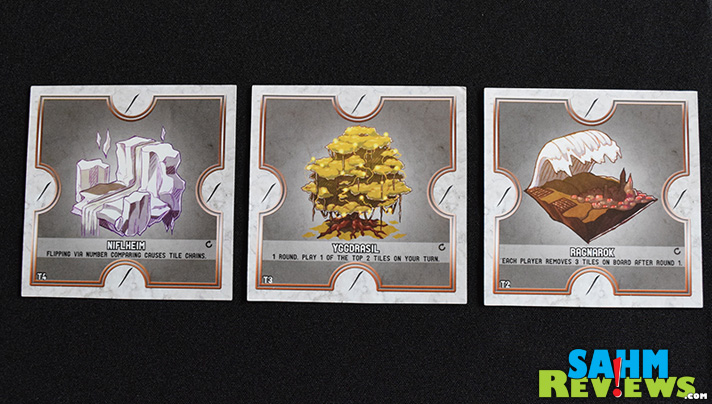 The game begins by placing a starting “Terrain” tile on the table. The base game’s tile has no special effects, or you can choose one of the above tiles to also add new rules. Twelve cards are dealt to the table and players take turns drafting one at a time until each player has a hand of six. 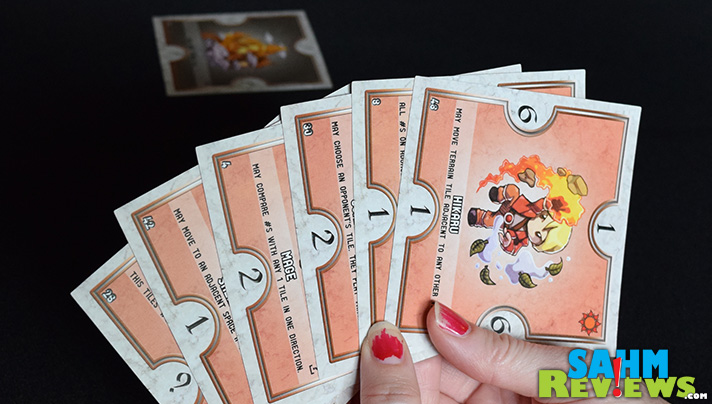 Sellswords is all about battle and area control. Your goal is to have as many tiles turned to your color at the end of the round and game, and you accomplish this by strategically placing your tiles next to other tiles and letting them fight it out. 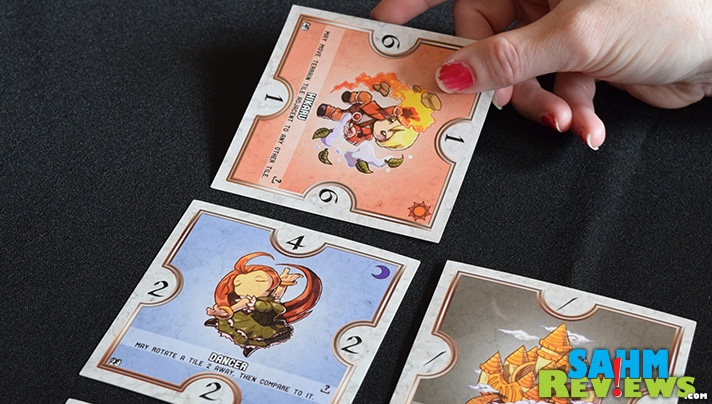 Each Hero has a special ability that can throw a wrench into the best laid plans of anyone. Your card might allow you to attack a hero two spaces away (instead of one), it may allow you to switch places with another hero and then attack or even (as above) let you move the starting location tile! Fifty different heroes with fifty different abilities – you’ll NEVER have the same game twice!

When your placed card’s value exceeds the value of the card adjacent to it, you get to flip it over to your color. If there has been more than one card next to this red one, that battle would have been resolved as well. If your number is lower, then the opponent successfully defends himself and you do not capture his hero. Ties also go to the defender. 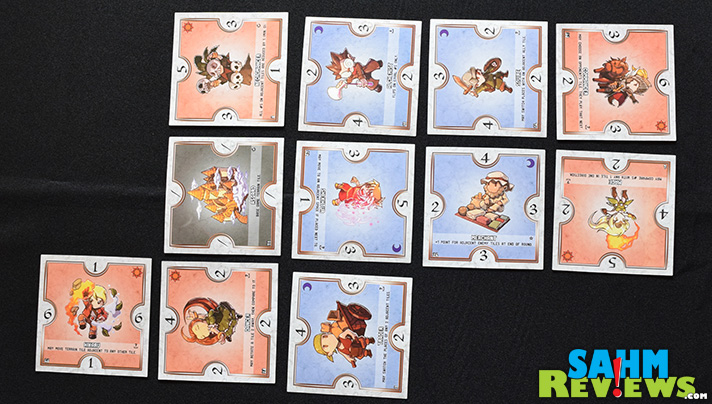 Just because the terrain tile was laid first, does not mean it is the center of the play area. You can play your tiles in any location as long as they are adjacent to a previously-played tile AND the height and width of the play area never exceeds five tiles. Once there are tiles laid that create a row or column of five, that becomes the limit of the play area.

After all twelve cards have been played, the first round (of two) is over and scoring takes place. 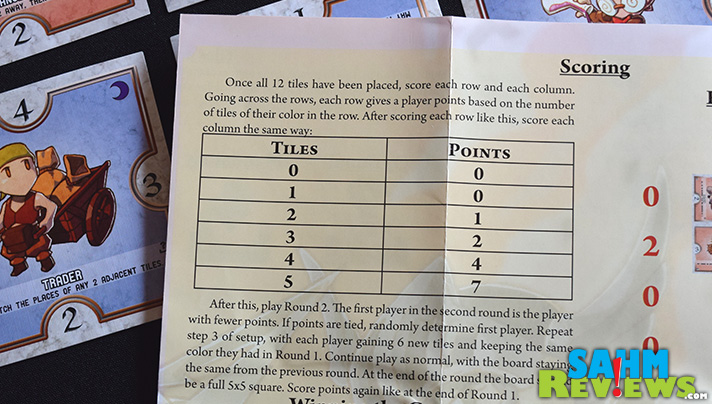 Scoring is much more than just having more cards of your color on the board. You tally up how many you have in each row and column and receive points for each one. Using the photo above as an example, red would receive a total of four points (two cards in two rows and columns, each worth one point). Blue would receive five (one column with three cards for 2 points and three rows/columns with two cards, again for a point each).

Twelve more cards are dealt randomly and you hold another draft. The player with the lower score from the first round goes first and play continues in the exact same manner until the board is completely full. 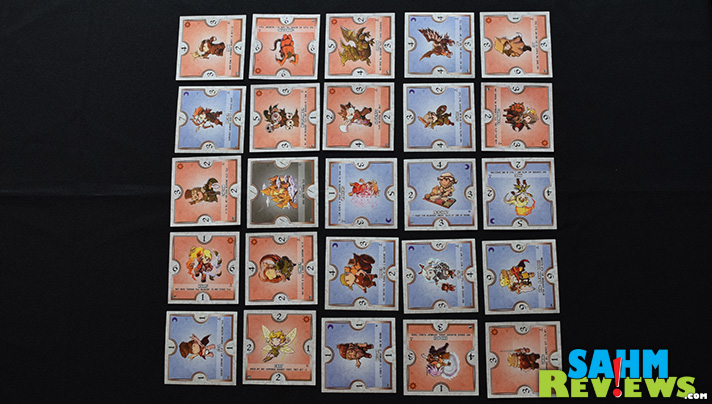 I want to add something about Level 99 Games that I wish would become the standard for all game publishers small and large. Not only do they take the time to create a how-to video for anyone to see (above), they also allow the full rules to be downloaded in .pdf form from their website. This serves the dual purpose of allowing someone to look over the full rules before making a purchasing decision and providing a backup copy in case you misplace your copy!

We didn’t find a lot to fault with Sellswords. My only complaint is again due to my aging eyes; the font choice for the abilities could be clearer for me, but nothing that a pair of reading glasses didn’t fix.

At a MSRP of under $20 (and a street price of around $14), you’re going to have a hard time finding a game that provides more value. Sellswords will be different every time you play, and with the ability for them to issue new heroes and terrains, you should never have the same experience twice. Pick up a copy at your local game store or off of Amazon and be sure to follow Level 99 on Facebook and Twitter to see what else they have in the works. If they are half as fun as Sellswords, you’ll still be getting a bargain.

21 comments on «A Big Strategy Game in a Little Box»