Everyone Loves a Parade Game Overview

As we approach the middle of March, you may think I’m going to start talking about games to play on St. Patrick’s Day. Nope, we did that a couple of years ago. I want to brag about the Quad Cities St. Patrick’s Day parade. It’s the only parade of its type in the United States that boasts a parade route reaching two states. It begins in Rock Island, Illinois then crosses the Mississippi River then wraps up after a short tour through downtown Davenport, Iowa. As someone who grew up here, I have to admit that I think about these unique events. Ask me about my favorite places for dessert in the Quad Cities and I’ll have no problem belting out a handful. But once-a-year events like the Quad Cities Marathon and this tend to fall off my radar for things that make this slice of the heartland unique.

Sorry, got a bit sidetracked there getting all nostalgic. I digress… the parade. I was reminded of it when I recently played Everyone Loves a Parade by Calliope Games. Created as part of their Titan Series of games, this comes from the mind of designer, Mike Mulvihill. In Everyone Loves a Parade, you and your friends are acting as float designers hoping to earn the title of Grand Marshal by creating the floats that best appease the crowds over the course of three rounds. Begin the game by selecting a player color then collecting the related scoring marker, float pawns and chassis card. Shuffle the decoration cards to form a draw deck and reveal the top five cards to form a Warehouse of available float supplies. Align the parade route with crowd cards equal to three times the number of players in the game and place the dice nearby. Shuffle the order cards and deal one to each player. The remainder will remain out of the round and be returned to the deck at the start of the following round. Place your scoring marker on the score track then determine a first player and give them the first player marker. 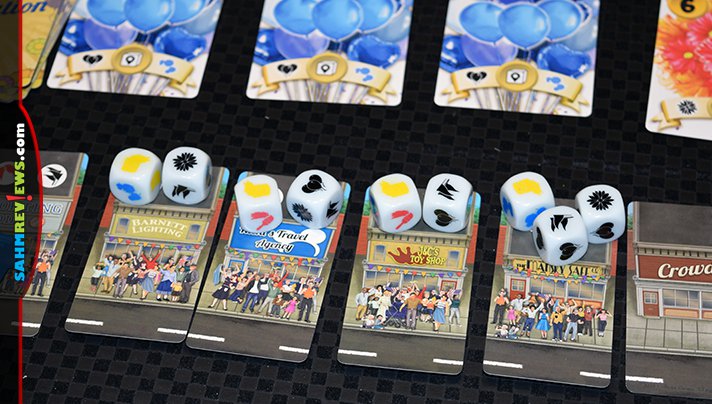 For each of the three rounds, you’ll reveal crowd cards, deal order cards and choose decoration cards. Working from the beginning of the parade route, reveal the crowd cards equal to the number of players. Each card will depict two or three preferences for what that group of people likes to see in a float. Place a color die indicating any color (red, yellow, blue) represented and an item die for the type of decoration (flower, balloon, streamer). As a float designer, you’ll naturally want to play to the crowds interests!

The parade organizers don’t like to do things all willy-nilly so they assign order cards. These cards let you know what order you’ll be lining up to influence the crowd. If you haven’t already done so for the round, shuffle the deck and deal one to each player. Place the remaining ones off to the side to use later. Cards not only show the order, but also reflect special abilities that may alter crowd expectations or allow you to make changes to your float. 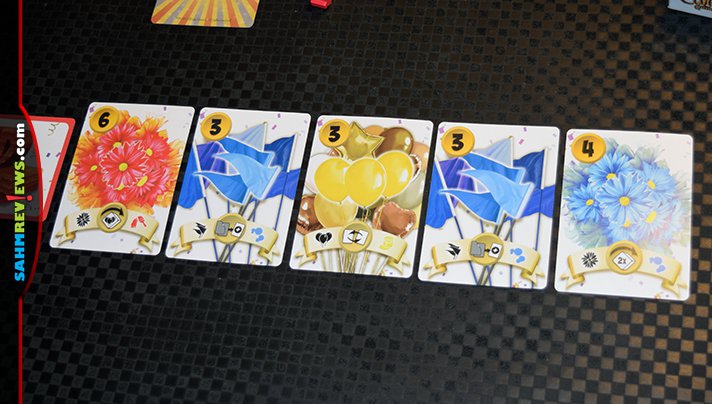 Finally, you’ll start building your float! Beginning with the first player and working clockwise, you get to raid the warehouse for decorations to create your masterpiece. Collect a card and place it alongside your chassis to indicate the components that will make up your final float. Maybe you like yellow flowers and blue balloons, but that doesn’t matter. You need to see what the crowds enjoy watching and tailor your float accordingly in Everyone Loves a Parade.

Unfortunately, sometimes the warehouse lacks the decorations you need, but you can work what they have thanks to the actions on the cards! When you collect a card from the warehouse, you’ll be allowed to take the action indicated in the bottom center. This may allow you to sway the crowd’s interests (re-roll the existing dice), shift the interests to another section of the crowd (in other words, move the dice) or make last-minute modifications or additions to your float (swap decoration cards with the warehouse or earn extras).

After all players have collected their decorations, the order cards are revealed and play proceeds from the lowest to the highest. The active player will place their float pawn on one of the available sections of the crowd. After all players have lined their floats up in front of the spectators, it’s time to score the round. Duplicates on any given section are removed. Players then compare their own float to the crowd’s preferences and score the number of points on their card for each match in their crowd. Everyone records their points on the scorecards, decorations are removed from all chassis and the next round begins by revealing crowd expectations and handing out order cards. After the third round, the chief decorator with the most clout with the crowd is declared the Grand Marshal!

Parades may be synonymous with summers and holidays, but Everyone Loves a Parade allows you to enjoy one rain or shine, day or night, inside or outside and with up to five of your friends. As a bonus, the game does double-duty as a seek and find of references to other games from Calliope Games throughout the crowd cards! You can buy direct from the publisher, at your local game store or order a copy from Amazon. Drop Calliope Games a note on Twitter or Facebook and let them know what your favorite parade features are. Get your creative juices flowing so you can get right to decorating when your game arrives!

What’s your favorite part of a parade?

2 comments on «Everyone Loves a Parade Game Overview»