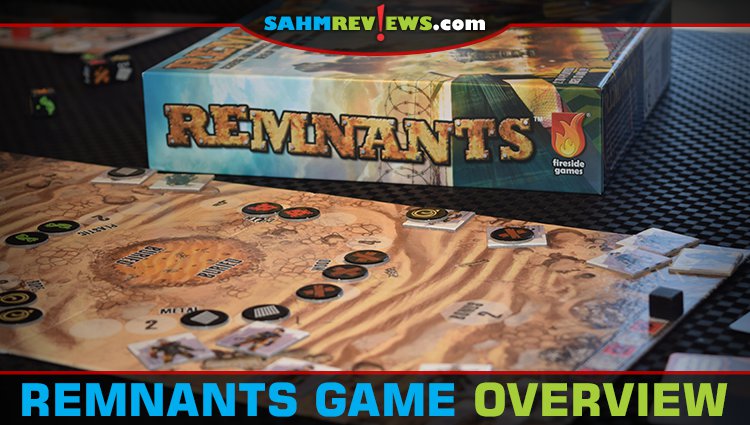 One of my favorite things to do at conventions is sit down and kick back with board game designers. Whether it’s a game they had a part in creating or someone else’s, it’s a unique experience when you watch how they absorb everything. They look for both positive and negative feedback on things they’ve developed as well as what others have poured their hearts and time into. I really started noticing this when Scott started designing games including Gekitai and Hues and Cues. Not only is it about improving their own games, but also viewing new mechanics and player interactions then brainstorming how those ideas can work with their own games. It has really impacted how I look at board games! Last year at Origins and Gen Con, we were able to play with Justin De Witt, designer of Castle Panic and other titles from Fireside Games. 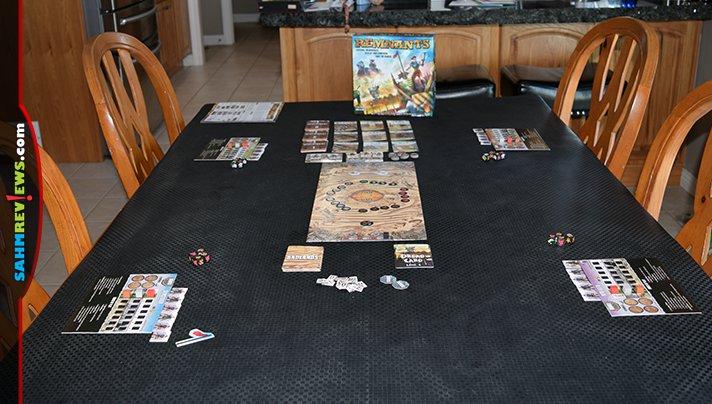 Among that list of his published designs is Remnants, a game set in a post-apocalyptic world where people are scrambling for supplies, fighting bad guys and trying to protect their compounds, all by using the remnants of what remained of the old world. Set up the game by placing the board in the center of the table and place the black cube on the “start” space then create a boss deck based on your preferred level of difficulty. Seed the board with bonus and resource tokens based on the number of players. Give each player a board, one of each cube (red, brown and grey), four dice and survivor tokens as noted on their specific board. The leftover Specialist and Survivor tokens will be added to their specified cards to be purchased during the game. Shuffle the Badlands cards and set alongside the board then make community piles of victory tokens, the remaining bonus and resource tokens. Lay out a grid of development cards. 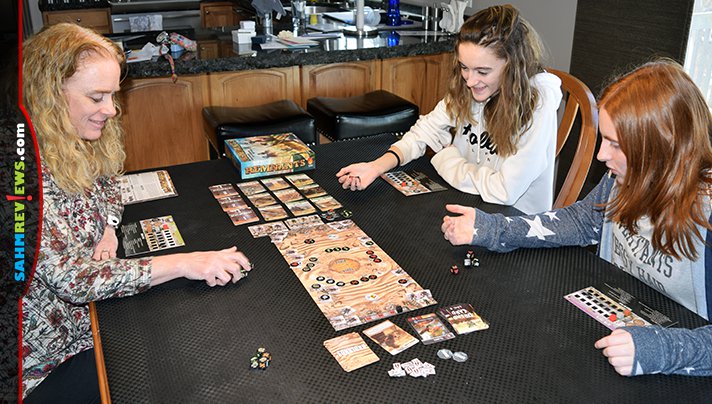 You might think that you’re trying to overcome a boss alongside your fellow survivors, but you would be wrong. In Remnants, every compound and leader is working with their own group of survivors in hopes of being the person with the most victory points at the end of the game. There are a couple different things happening within the game. You’ll be rolling dice in order to gather loot and attain resources that can be used to purchase upgrades. Every round you’ll potentially be dealing with adversaries in the badlands and other round (and at the end of the game), you’ll be working up to fight the boss. 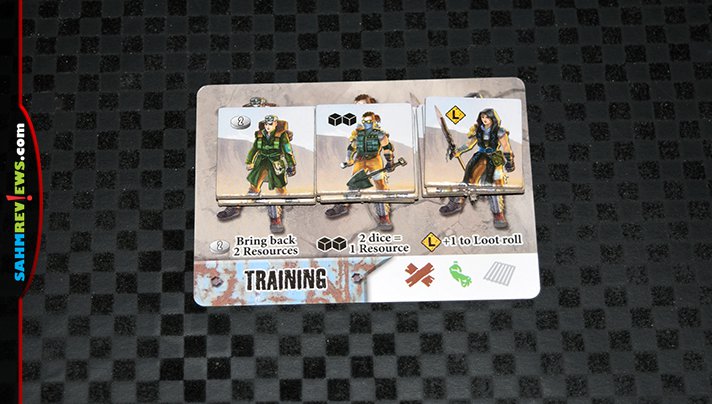 The game takes place over six turns, each made up of five phases (scavenge, build, fight, heal and cleanup). Begin the game by sending your survivors and specialists into the field to scavenge and loot. Specialists (Scroungers, Haulers and Rummagers) have abilities that include earning more resources or loot and picking up more than one. The people who will be scavenging for resources are placed in the desert area of the badlands while the ones you want to loot will be in the cityscape. 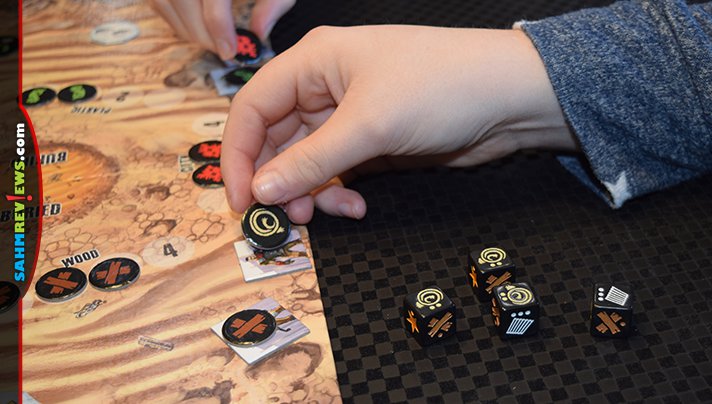 Once deployed, all players simultaneously roll their dice as quickly as possible in order to collect resources. With the exception of specialist, they all function the same. Roll three of one type of resource and you collect it from the field. Then you repeat the process for each survivor you’ve sent into the badlands. Once they’ve collected their allotment, you race to roll three stars and earn a bonus token. Once all bonus tokens are claimed, the scavenge phase ends. These resources will be used during the build phase so plan accordingly while you’re collecting! After the scavenge phase is over, you’ll bury any leftover resources that weren’t claimed. 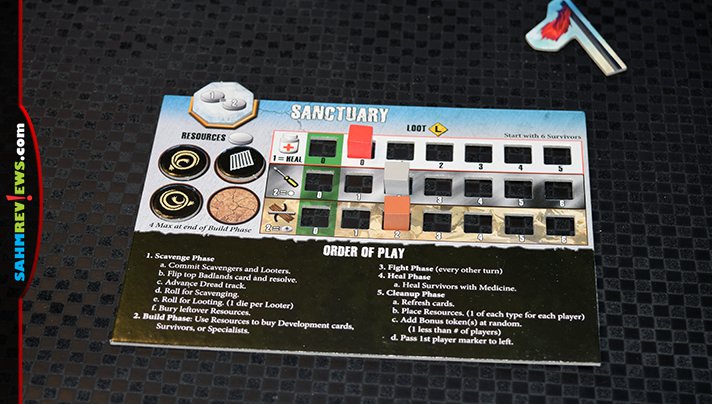 For each regular survivor that you’ve sent out to loot, you’ll roll one die. Instead of looking at the resource symbols, you’ll count the number of pips displayed aside the image. After totaling the number of pips, you’ll select how many of each medicine, screwdrivers and scrap you would like and adjust your player board accordingly. Medicine is used to heal injuries, screwdrivers adjust your roll values and two scrap can be cashed in at any time to claim a resource from the general supply.

Badlands cards are flipped during each round and reveal text that needs to be resolved. Sometimes they aren’t bad, but generally they are a challenge. As an example, a carnivorous plan will injure a looter. A sandstorm gives you the option of returning three scavengers to the compound or they’ll all be injured. 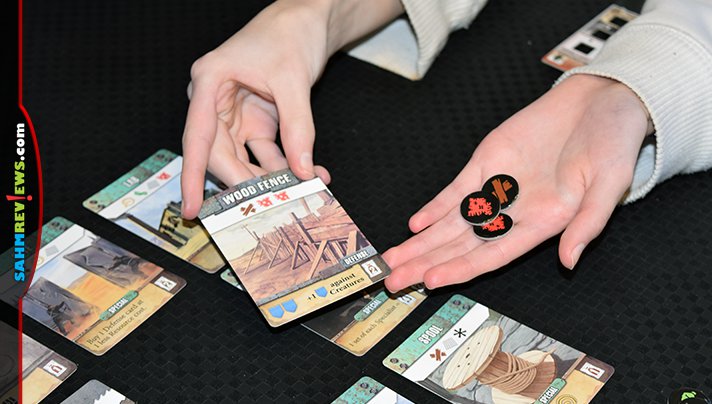 After the scavenging has ended, it’s time to build! Beginning with the first player and proceeding clockwise, spend resources to purchase cards from the tableau. There are three types of cards including defense, weapons and specials. Most of these are designed to help you with the boss battles! 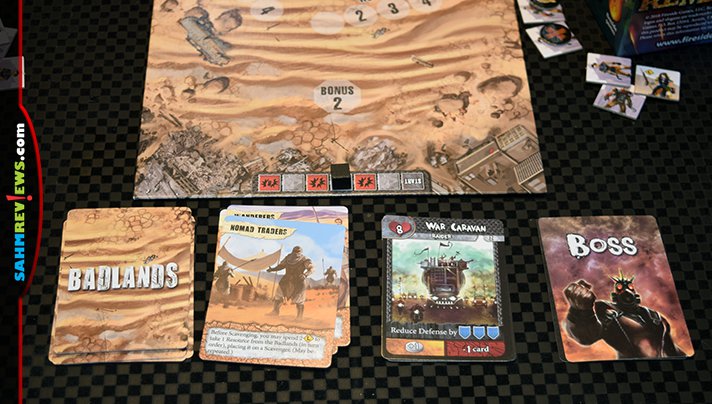 The Dread Track is advanced each round with fights occurring every other time. During the related rounds, players take turns fighting the face-up Dread card. Look at the health level of the creature or raider then factor in the defenses and weapons on your development cards. The number of shields you have reduce theie health then you’ll roll one die for each weapon symbol. Calculate the number of pips on those dice and hopefully it’s greater than or equal to their remaining health! If you defeat the card, you’ll earn victory point. If you lose, you’ll implement the penalty at the bottom of the card.

The final two phases are mostly housekeeping. You have the option first to spend medicine to heal injured survivors or specialists then you cleanup and reset the resources, bonus tokens and cards. The 1st player token is passed to the person on the left and a new round begins. After six rounds, points are calculated for victory points already earned and ones displayed on cards, healthy members of the tribe and additional end-game criteria on some development cards. The person with the most points in Remnants has proven their ability to survive after the apocalypse and claims victory!

While the labeling on the box says it’s for ages 13+, Fireside Games is known for creating family-friendly products and this one is no different. With an explanation of the rules, I could see younger kids being able to play. If you’re ready to forage for supplies for your next game night, pick up a copy of Remnants on Amazon, direct from the publisher or at your local game store. Just watch out for raiders while you are on the hunt!

Would you rather scavenge for resources in a desert or loot in a city?