In the future, the beginning of this century will probably be known for a lot of things. It saw terrorist attacks, nuclear proliferation among smaller countries, military coups, an economic breakdown and the passing of beloved President Ronald Reagan. Not everything was bad – China enjoyed double-digit growth for all of the first decade, the growth of the internet spurred global communication and usage of computer-generated imagery became more widespread in films.

Another thing that became hugely popular was reality TV. You can decide whether it belongs in the “good” or “bad” column of things from the 2000’s. I used to catch episodes of Cops on late-night television in the 90’s and have seen every single episode of Pawn Stars (and even visited their store!). Nicole has been a fan of Survivor and The Amazing Race since their beginnings and regularly filled up our DVR (another amazing invention from the early 2000’s!) so she could binge a few at a time. In 2005, A&E Network debuted their new reality show, Intervention, which is still in production today. It featured the tales of caring families and friends confronting a person whose behavior gave them concerns. It all happened in real-time with cameras following both the intervened and their worried friends. Most of the stories were heartbreaking and not every episode had a happy ending.

On the bright side, the popularity of Intervention has spurred a hilarious party game offered by Smirk & Laughter. We Need to Talk… simulates the intervention experience by doing away with the somber situations experienced by the TV show participants and introduces silly and outrageous behaviors. The twist is the intervened doesn’t realize their idiosyncrasy is bothering everyone else and is just now discovering they’re guilty of doing something odd! 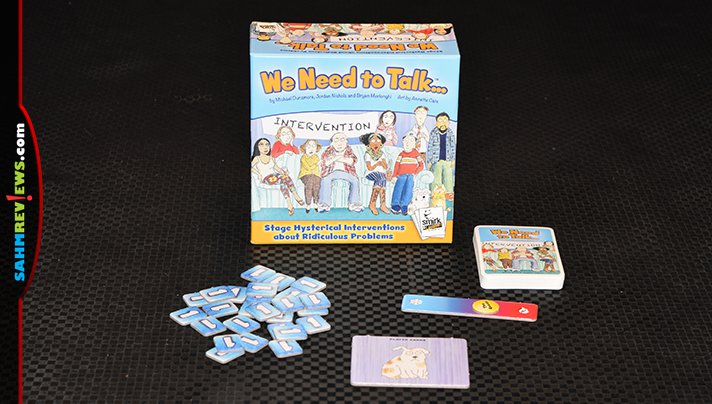 Gather everyone around and give them each a Player Guide Card. Set aside a number of scoring tokens depending upon the number of players and put the Hot/Cold Track in the center of the play area. Grab paper and a pencil for scoring. The owner of the game or party host will become the first intervened player, takes the scoring tokens and places them with the “1” side face up directly in front of them. 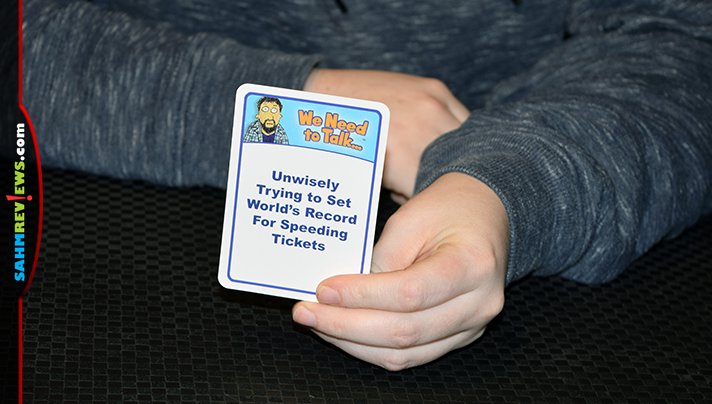 We Need to Talk… is played over three rounds for each intervention, each with its own rules for clue-giving. The active player will draw one of the 274 Problem Cards from the box, which lists the malady they must correctly identify. All other players may see what is on the card, but the information is kept secret from the intervened. Once everyone has seen the card and is ready, the card is placed face-down on the table (it can be looked at by the concerned friends at any time) and the clue-giving begins. 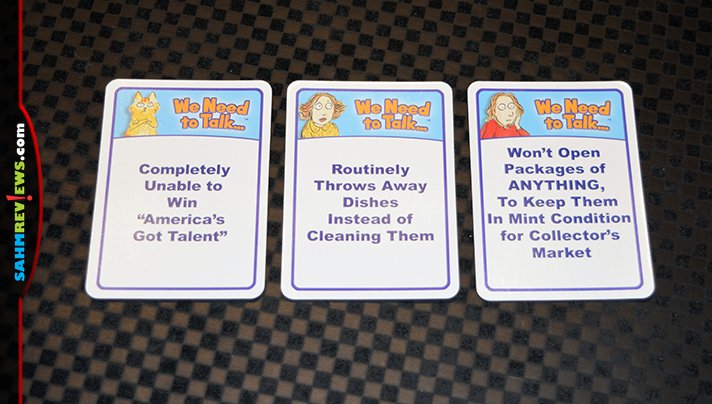 For the first round, all players will make statements in order to broach the subject. Using only one or two words about the issue, they will make a statement like “We Need to Talk about your driving record”. Clues can never use any of the words on the card, must be unique from the other players and must be thought of as a valid clue by the other participants, or your turn will be declared a “foul”. After each person gives a clue, the intervened will award them with one of the scoring tokens in their possession, flipped to the “2” side. 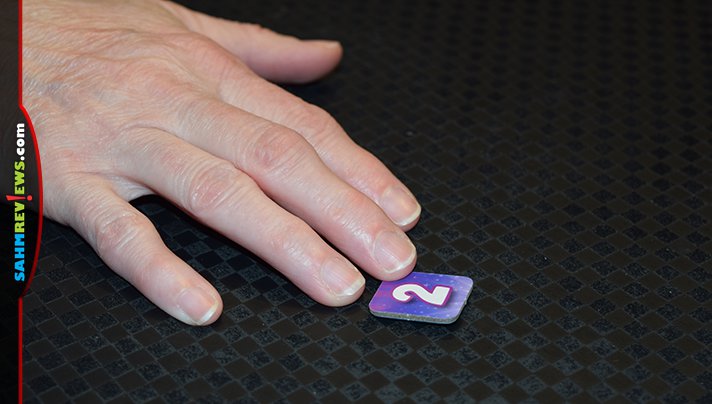 The second round is an emotional appeal where all friends will tell the intervened how their behavior affects them personally. “It scares me to think you might get hurt” might be a good follow-up to the previous round’s driving record clue. The third round of participation challenges everyone to offer a solution to the problem. “You might try taking an Uber if you’re in a hurry.” is a valid suggestion! 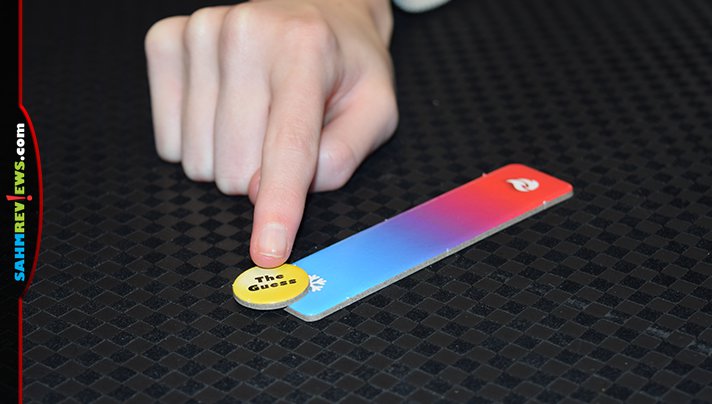 If the intervene’s guess isn’t correct, play continues as normal with the friends having the opportunity to tell the intervened how close their guess was by sliding a marker on the Hot/Cold track to one end or the other. If the problem hasn’t been determined by the end of the third round, the intervened gets one last attempt at guessing. If still incorrect, no one receives any points for the round. If correct, the intervened takes one token back from each of the players and everyone scores their tokens normally. After everyone has had a chance at playing as the intervened, the scores are totaled and the person with the highest score is the winner of We Need to Talk…!

Special rules for seven or eight players keeps the game moving by having players only participate during certain rounds (as determined by a special deck of cards dealt out at the beginning). It is suggested the friends determine what constitutes a correct response by the intervened by being fair-minded, since their answer probably won’t match the card EXACTLY. As long as the overall idea of the problem is expressed by the intervened, everyone (except the last player) scores!

We Need to Talk… is a party game designed for 4-8 players and appropriate for ages 14+. The age recommendation is not due to mature content, but more because some of the terminology or situations listed on the cards (or the concept of an intervention) may not be familiar to players of a younger age. Pick up a copy on Amazon, direct from the publisher or at your favorite local game store. Let Smirk & Laughter know that you’re concerned about how many great games they make on their Facebook and Twitter timelines!

What silly thing do you do that you probably need an intervention for?