With a never-ending supply of information available on the internet, people naturally have no lack of ability to discover something new. Whether you want to learn what to pack for a cruise, how to host a sushi-themed party, read about new cars or get your teens ready for driver’s ed, there are tips on the other side of the screen. When it comes to games, we appreciate that readers come here to learn more about a variety of different titles. While we encourage people to read more about games before purchasing, with thousands of new games releasing every year, the phrase “try before you buy” has a great deal of value.

We discover new games by seeing them in person, playing them at game meetups, visiting local game stores and attending national, regional and local game conventions. Large local meet-ups or small conventions are some of my favorite ways to be introduced to new games because often someone who has already played the game is excited enough to introduce others to it. That’s how we first discovered Gugong from Tasty Minstrel Games. A friend invited us to play while attending Geekway to the West in St. Louis. Gugong is a strategy game set in China during the Ming Dynasty and built on the concept of exchanging gifts with people in power (AKA bribing) with the ultimate goal of obtaining an audience with the emperor. 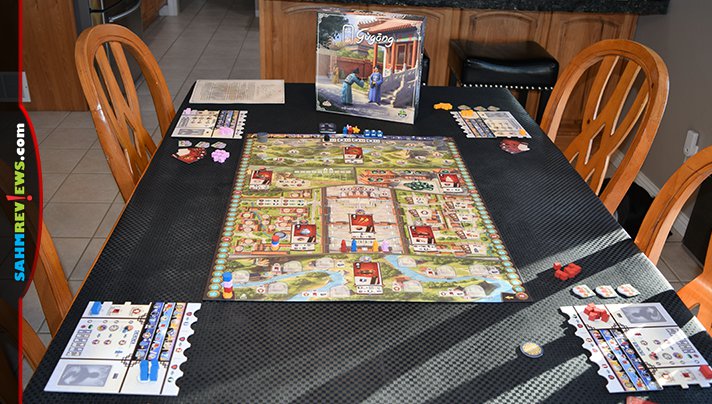 The board is divided into seven sections so there’s a lot happening in Gugong. Jade, travelers, ships, envoys, medals and decree tiles are among the items that will populate the board that is placed in the center of the table. Each player takes their own personal board and servant tokens along with a set of four Gift Cards. 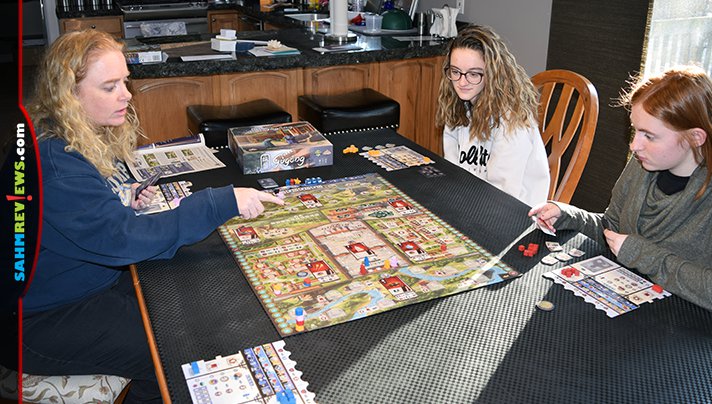 A game of Gugong takes place over four days, each consisting of three phases: The Morning Phase, The Day Phase and The Night Phase. During The Morning Phase, players prepare for the coming day including rolling the Destiny Dice, determining the start player, refilling the map, executing decree advantages and earning new servants. Players then perform multiple actions during The Day Phase. Finally, everyone checks to see if they’ve matched cards with the Destiny Dice during the Night Phase. 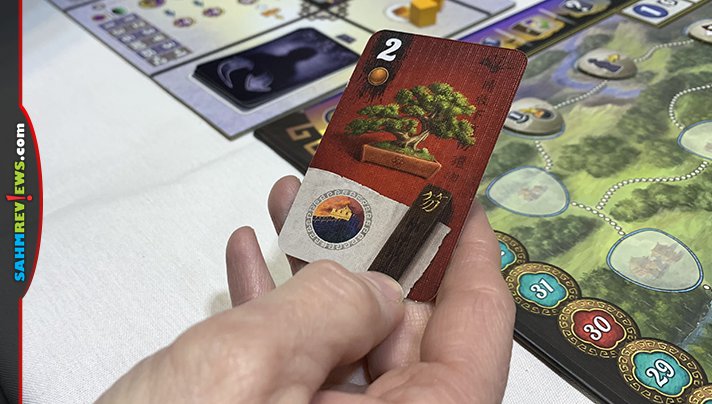 Exchanging gifts was a subtle form a bribery wherein one person would give a valuable gift to a person of power and receive a gift in return, generally something trivial. This concept is the main method for taking actions in Gugong. Each card has a gift card value and reference to the action or bonus of that particular card. You’ll select a card from your hand and exchange it with another on the board. The new card will go into your discard pile to be used the following day. Depending on which location you choose, you may be able to execute that official’s action. If the card you are exchanging has a higher value, then you may proceed with the action. If it’s equal or lower in value, then you haven’t done a good job of following the protocols for exchanging gifts (remember, it’s basically a bribe) so you have to choose a penalty action in order to complete the exchange and perform the action. 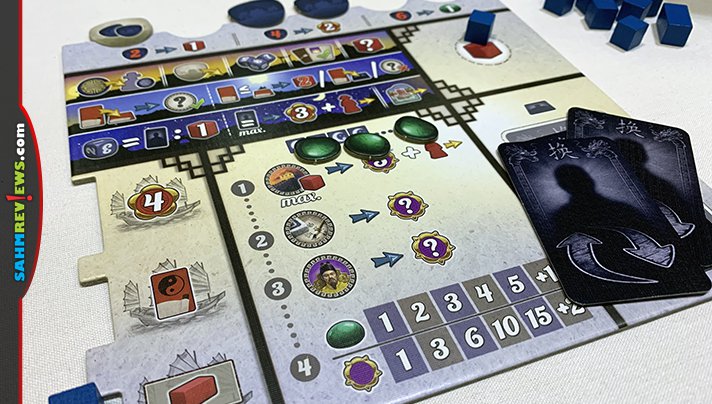 The gift cards are essentially the currency of the game and you’re restricted to what you’ve picked up on the prior turn. However, there are several other components that play into the transaction as well. As an example, servants are a commodity that allow you to take additional actions or improve the quality of the action you’ve selected. The player board is how you track what you have. 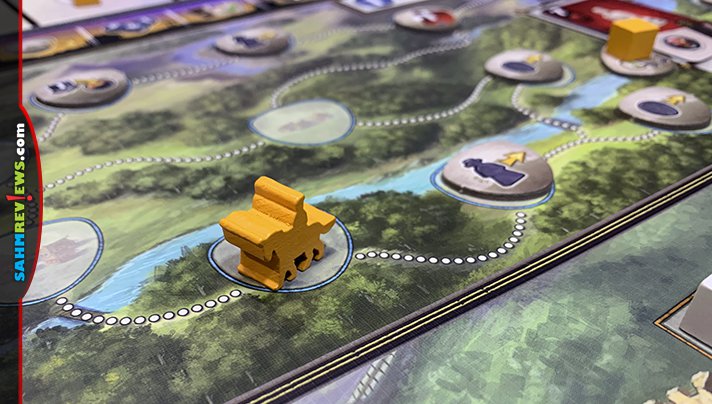 On the main board, there are seven areas to offer your gifts. In the Travel section, you’re sending your collector throughout China, accruing taxes on behalf of the emperor. Those tokens earn you the stated bonuses immediately and are tracked on your game board for future benefits. You may opt to help renovate sections of The Great Wall or visit the market to buy Jade. Decrees offer advantages while Intrigue indicates your influence within the city. Earn permanent rewards by sending your servants on a journey through the Grand Canal to trade with people outside of Beijing. Each section offers a different type of favor to help you earn victory points, status, first player advantage or a variety of other perks. As an example, you may earn a Double Servant that occupies two spaces on the Great Wall and Grand Canal, two places where having servants placed is crucial to ensuring you maximize your opportunity there. 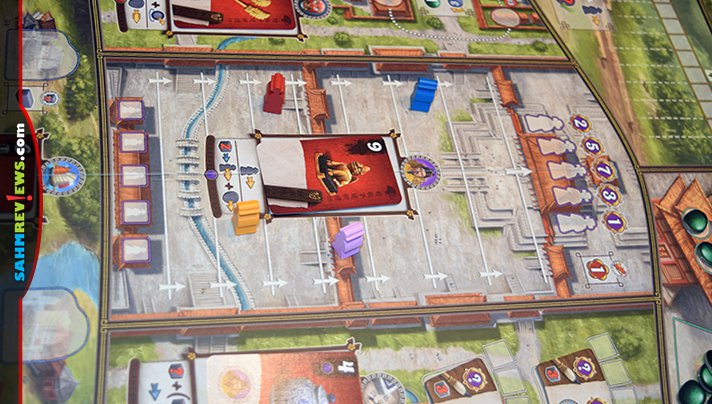 Finally, visit the Palace of Heavenly Purity to progress toward obtaining an audience with the emperor. Ultimately, this is the most important space on the board. If you fail to reach this goal by the end of the fourth day, you cannot win – no matter how many victory points you earn. 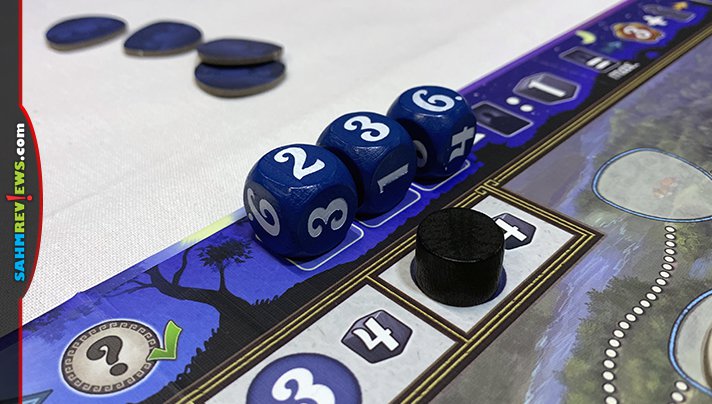 During The Night Phase, players simultaneously check to see if the value of each Gift Card in their discard pile matches the values on the Destiny Dice. You’ll earn servants (and possibly victory points, too) for each match! Wrap up the evening by moving all the ships on the Grand Canal one step forward and claim any possible rewards.

At the end of the fourth day, calculate final scoring by starting with The Great Wall. Receive victory points for Level 3 Decrees and order of arrival in the Palace of Heavenly Purity. Jade values are calculated and added to the final score as well. The player with the most victory points is declared the most influential and wins the game!

As I said, there’s a lot going on and this is an overview of what’s really happening in the game. But despite a lot of options, it isn’t an overwhelming game. If you focus on the simple idea of trading cards based on this ancient form of bribery then you’ll get the hang of the game quickly. Iconography on the board is extremely helpful in figuring out what each section does. If you have a chance to play at a game cafe or local convention then you should. It will help you see how easily all this falls into place. If you’re ready to purchase a copy of Gugong, grab a copy on Amazon or from your local game store. No bribing needed to get us to keep watch of what Tasty Minstrel Games is up to on social media (Facebook and Twitter). Their games consistently become regulars on our game table, regardless how we first discovered them!

Where do you go to try new games?