Continuing our story from the past couple of weeks and our great day at Goodwill, Golf Mania! was the third game we picked up. This one in particular caught our eye because of the publisher listed on the box – Fantasy Flight Games. If you’re a fan of hobby-market board games, you already know Fantasy Flight for Twilight Imperium, Mansions of Madness or Eldritch Horror. Even with the low ratings given to Golf Mania! on BGG, we were still hoping for a good game considering FF’s history.

Golf Mania! is a card game for up to six players who are vying to score 18 points before their opponents. The box contains two decks of cards (Game cards and Hole cards) along with a standard six-sided green die. Each deck is shuffled independently and set in the middle of the play area along with the die. All players begin the game with a hand of five cards dealt from the Game card deck. 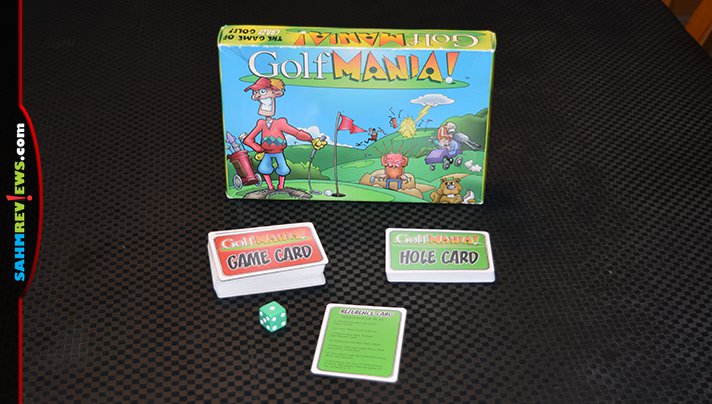 Watered down, Golf Mania! is simply about rolling a die to meet certain criteria to continue to play the round. At the beginning of each round a Hole card is revealed. On the right side of the card the number of points the hole is worth is listed. On the left side is a number (or less) that must be rolled by each player in order to “hit the green”. In the middle of the card are two of three available symbols that signify which types of Game cards might be played this round. 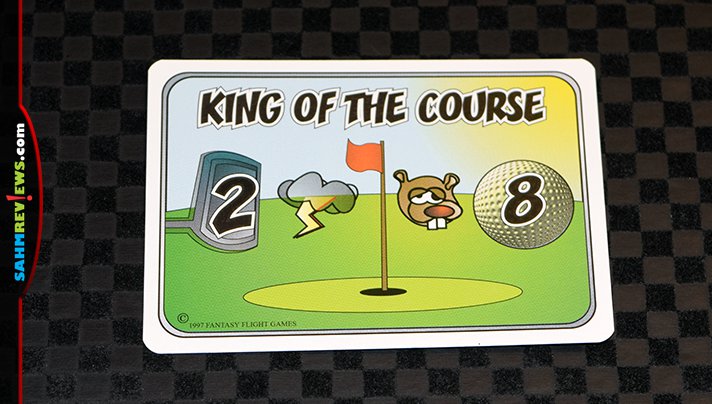 After revealing the Hole card, players may play Terrain or Hazard Game cards to affect their own performance or hinder their opponents. Brown Terrain cards, of which only one may be played per person per round, represent different forms of obstacles you may play on other players to make their roll more difficult.

Yellow Hazard cards may help you or hurt your opponents, and you may play any number of them as you wish. These cards also have an icon printed on them and to play them, must match one of the two icons on the current Hole card. 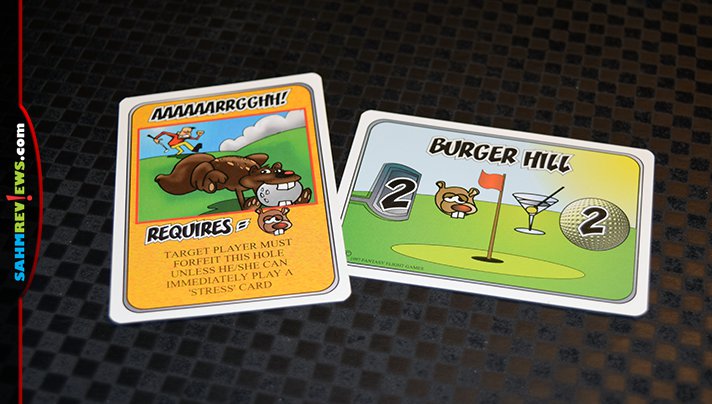 Once everyone has played all the Terrain and/or Hazard cards they wish, starting with the person with the most Hole Points, each person rolls the die once. This is the Drive roll and must result in a number equal to or less than the number printed on the left side of the Hole card, including modifications from any cards in front of them. If you are not successful, you are out for the rest of the round. If no player is successful, the Hole card is discarded and a new one drawn. 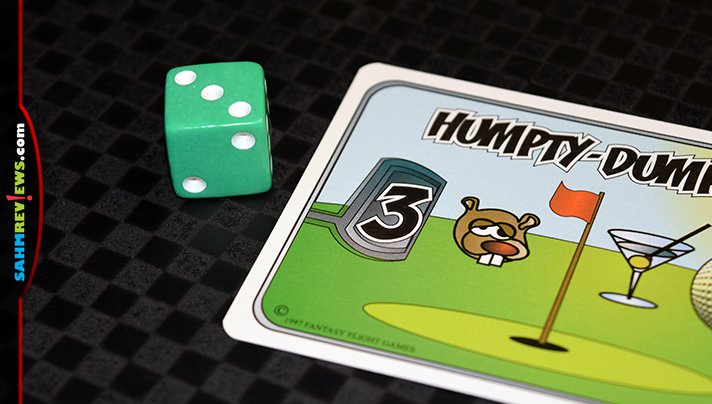 All players who successfully made their drive must now roll again for the Green roll. The person who rolls the lowest value wins the hole. If tied, those players roll again to see who can roll the lowest. The hole winner collects the card and adds it to their growing pile with the points visible to all players. With the round over, players may discard up to one card from their hand and draw back up to five cards to begin the next round in the same manner. 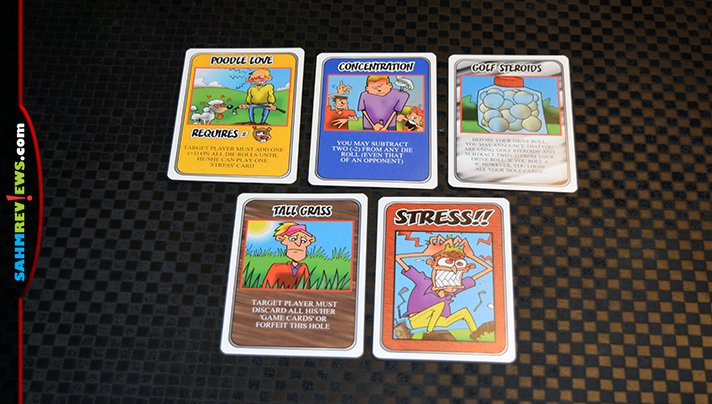 Other cards in the deck may be played at any time. Blue Action cards are quick, helpful cards. Metallic Equipment cards represent various forms of equipment and upgrades. You may have up to two Equipment cards in play at any time and must discard one if you want to play a new one. Red Stress cards allow you to avoid certain cards when played. If you can play two Stress cards at once, you can also use them to cancel the effect of any Game card just played! The first person to collect at least 18 points at the end of a round is the winner of Golf Mania!

To be honest, the low rating of Golf Mania! on BGG is justified. It’s only a game about rolling one die two times with cards that modify your roll. There’s not a lot of strategy needed, just a lot of luck. It is also probably best played with a small group that is familiar with the concept of golf. Young kids just won’t understand the meaning of “drive” or “green” in this context.

If you must have a copy and can’t find one at thrift, there are always examples available for purchase on eBay. Most have an asking price of $20 or more (shipped). Save your money and spend it on something better from Fantasy Flight Games like Letters from Whitechapel – it’s one of our favorites!

Have you ever played a GOOD golf-themed board game?