From the minute a man meets a woman, he is put to the test. He’ll learn over time, but even after years there are questions about whether he has made the correct decision. In the beginning, the questions stem around whether he selected the right restaurant for the date or if he should call, text or stop by for conversations.

Then there’s the question of what to buy as a gift. From day one, finding the perfect gift is and will continue to be an ongoing concern for every man. Once children enter the picture, it gets a little easier because most moms are perfectly happy with gifts and moments from the hearts and hands of their children. I don’t even ask Scott for gifts any more because, honestly, there isn’t anything I really need. Madison and Kennedy echo what Scott says and remind me that gifts aren’t about what I *need* but what I *want*.

Smart kids, they are. So is their dad. They know what I like, what I want and what I refuse to ask for.

They know I have a weakness for gadgets and some of the Ninja kitchen gadgets have been the envy of my eye during trips to the store. I mean, have you SEEN all that these things can do? I’ve loved my previous coffee brewing system, but the Ninja has some features that my prior one didn’t include.

Among them, an option to create coffee house drinks! You know what it’s like when you have a teenager and a tween-ager who are starting to regularly ask to stop by Starbucks? It makes my pocketbook scream. This new Ninja  Coffee Bar is going to make me happy AND make them happy.

Oh, and Kennedy learned to make me a fancy-schmancy cappuccino thingy with steamed chocolate milk the day we pulled it out of the box. How cool is that?! The process was remarkably simple with the directions easy to follow and one push of a button to indicate which type of drink.

I’ve used the Ninja Coffee Bar multiple times and typically steam the milk before because it’s been a nice way for me to cut down on the amount of sugar I need to add! It’s truly heavenly and I haven’t even had a chance to use it for an iced drink yet. Yes, there’s a setting for that as well.

As excellent as their coffee bar is, Ninja is known for their blending devices for a reason. They’re multipurpose and extremely useful. I’ve been able to make smoothies in a snap and the girls made a sorbet. Our trick to use a mason jar in our regular blender was a nice way to mix thing up a bit without dirtying the container, but when it comes down to it, it’s still simply a blender. I needed a separate food processor for other concoctions. The Ninja Duo provides one base with containers that double as glasses for smoothies and a separate bowl designed for everything from salsas and salad dressings to mixing cookie dough!

I was able to whip up a quick post-workout protein shake which included frozen berries and a banana and it cut through it like nothing. The control panel includes a variety of choices that make creating the different beverages and recipes extremely simple. Not only does it have a “smoothie” button but also has an AutoIQ button and timer so it knows when to stop. 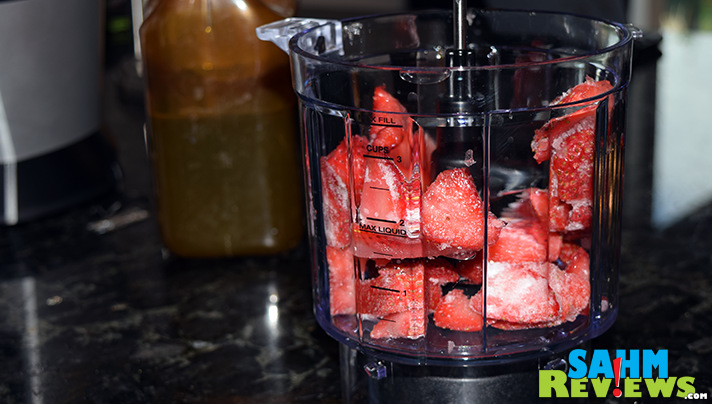 Kennedy, on the other hand, had a plan of her own. We had some strawberries in the fridge that were getting ready to go bad so she cleaned them up and froze them yesterday. Today, she took them out, added them to the Ninja Duo, added some lemonade and vanilla and whipped up a sorbet! 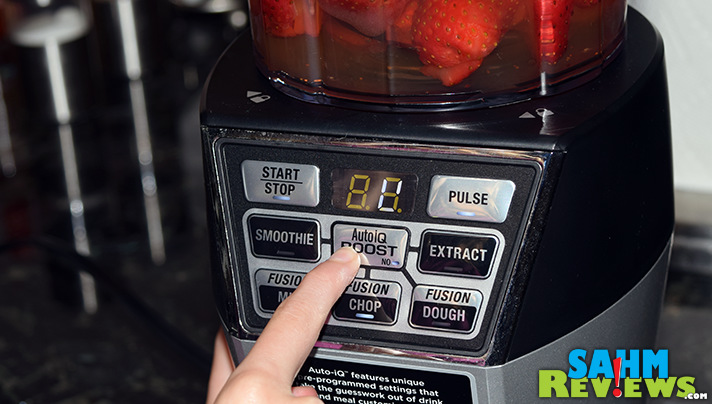 The interesting thing about the Ninja Duo is the comprehensive base. I’ve never heard of trying to make a dough in this type of a gadget. Fusion Dough, Mix and Chop are available… right… there. Can’t get much easier than that!

After a quick AutoIQ Boost then hitting Fusion Mix, the 60-ish second countdown began. Once completed, we poured the blended mixture into a dish and impatiently waited the 20 minutes for it to freeze. The result: Yum! (And a great way to use up berries that were about to go bad!)

I asked Kennedy what she thought about using both the Ninja Coffee Bar to make coffee beverages and the Ninja Duo to make sorbet and smoothies. She said “Oh, they were SUPER easy to use.” On using the Coffee Bar, she said, “I get Vanilla Bean drinks at Starbucks so even though I don’t drink coffee, I can see myself using this more. Especially when I get to high school.” She actually already told Scott that she plans to make me a special drink to wake up to on Mother’s Day! With respect to the Ninja Duo, she has already put in a request for the grocery store to get chocolate chips and zucchini to make Zucchini Bread in the Duo bowl. She also has asked if she can make the No-Bake Mini Cheesecakes, the Quick Fried Rice and the Whole Wheat Pizza Dough which were all in the included recipe book.

So let’s circle back around and talk about whether or not gadgets – especially kitchen ones – are a good idea as a gift for mom. I don’t know about you, but a gift that has kids making dinner, dessert AND coffee is totally worth it!

Visit the Ninja website for a slew of awesome recipes as well as details on their various products. Check out their Facebook (NutriNinja and Ninja Coffee Bar) and Twitter feeds (NinjaKitchen, NutriNinja and NinjaCoffeeBar to see what else they have cooking.

Would you rather receive a Ninja Coffee Bar or Ninja Duo as a gift? (Yes, both is an acceptable answer.)