We kicked off our holiday gift guide series a few weeks ago with a list of games for the family. We feel so strongly about the importance of games in families that our list was too long for just one guide. We appropriately named that list Family Games Pt 1. We’re here today with an additional set of games we think deserve a place to on your wish list.

Some games may seem like they are targeted toward young children, but don’t judge a book by its cover. We own a number of games such as Animal Upon Animal that are simple enough that anyone can play but still involve some strategy and result in a lot of laughs.

As a reminder, each evening at 7:00 pm Central, we add to our amazing 44 Days of Giveaways! Several of the games featured in this list will be participating in that promotion so be sure to enter if one strikes your interest. Have more questions about something on the list? Just ask! 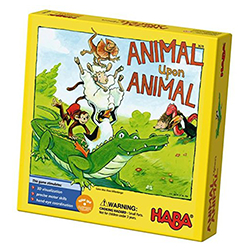 Crocodiles, frilled lizards, sheep, toucans and monkeys, hedgehogs and snakes… you’ll never find such a motley mix of animals in any other game. The entertaining stacking game is one of HABA’s most popular games. Players race each other to be the first to place all of their wooden animals upon the animal pile before any of the other players. A roll of the die tells the players how many animals can be placed or whether they can add to the alligator base. This game fosters hand-eye coordination and fine motor skills and is fun for adults as well as kids. 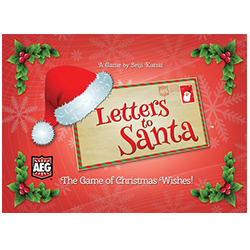 Letters to Santa is a fun holiday version of the hit card game, Love Letter. In this game, you attempt to get your Christmas Wish List to Santa Claus, with the help of Elves, Reindeer, Gingerbread Men and more. But beware the wily Krampus who wants to keep your letter from Old Saint Nick! Letters to Santa is the latest in the “Letters” series which also includes Batman, The Hobbit, Wedding edition, Kanai Factory, Tempest and a few others. 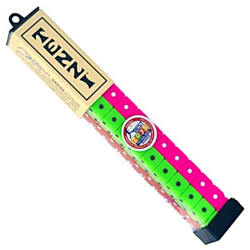 The world’s fastest game! Everyone gets ten dice. Someone says, “Go!” Then everyone rolls and rolls as fast as they can until someone gets all their dice on the same number. Sure, there are a few more rules, but you get the idea. It’s a fun, fast frenzy! It’s TENZI. Available in a variety of colors and patterns, you can find a package of TENZI dice to match any personality. It also makes a perfect gift for any dice fan!

Bugs in the Kitchen 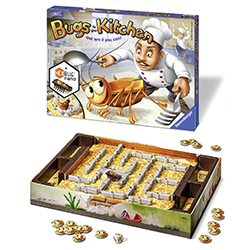 Bugs in the Kitchen, available nationwide for the first time, is a dynamic game of strategy. Players attempt to lure the battery-operated Hexbug® Nano® (from Innovation First) across the 3D game board and into their traps without letting them escape. One wrong move can release the bug, sending it back onto the board and making the players start over from scratch! Ages 6+

The family strategy game where players are hungry little goblins who love to eat stones. Be a clever goblin and gobble up the most valuable stones across the board. But don’t be too greedy because a stuffed goblin is a slow goblin. The more stones you gobble, the bigger you get, and in the end the fattest goblin wins! Gobs of fun for everyone! 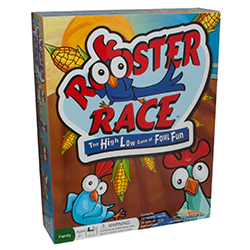 Help your roosters gather corn in this high low game of fowl fun! Rooster Race™ is a fun simple card game that suits all ages, from kids, teens, college students, parents, and grandparents. If you can count to 15, you can play Rooster Race™. The object of the game is to make educated guesses; to predict if the value of the top card in your card stack is higher or lower than the last card played by your opponent. 1-5 Players, Ages 5-Adult. 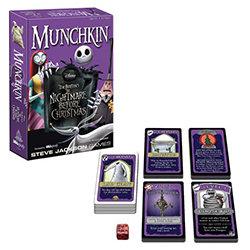 Fans of The Nightmare Before Christmas and Munchkin have an entirely new ghoulish world to immerse themselves in. Battle and banish foes like Oogie Boogie, Doctor Finkelstein and Lock, Shock & Barrel from Halloween Town. Charge into battle on Santa’s Sleigh as you wield new weapons, curses and treasures. You can play Munchkin The Nightmare Before Christmas on its own, or add it to other Munchkin games for more monster-mashing, treasure-grabbing action! 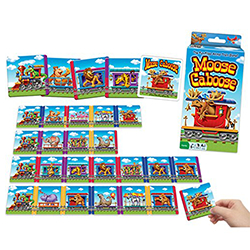 Four trains full of happy animals are chugging off on an adventure. The player who collects the most animal cards, by matching colors, wins the game! 2-4 Players. Ages 6+ 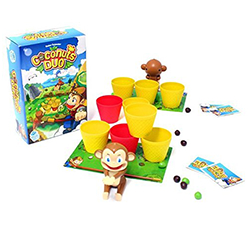 Coconuts Duo is a standalone expansion for the dexterity game Coconuts. Use your monkey launcher and your skill to fling coconuts into cups, claim them, and place them on your board. Stacking a pyramid of six cups to win the game, but beware the new powerful magic cards the other player may use. Coconuts Duo can be played as a tense two-player game with ten new special magic cards, or it can be combined with the original Coconuts to play a five- or six-player game. 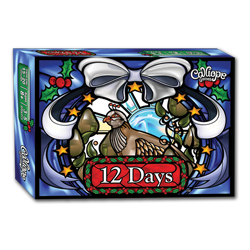 Celebrate gift giving and the spirit of Christmas with 12 Days, a lovingly illustrated card game by renowned artist Echo Chernik. 12 Days is an experience the whole family can enjoy! Inspired by the iconic Christmas carol “The Twelve Days of Christmas” and designed by James Ernest and Mike Selinker, 12 Days is ingrained with familiar play patterns of traditional card games; 12 Days feels like a true holiday classic. Bring joy and good cheer home to your family with 12 Days! 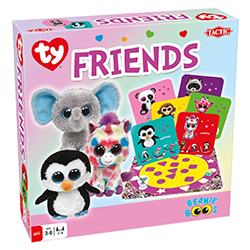 By working with Ty, the world famous plush company, Tactic was able to develop fun, educational games featuring the Ty Beanie Boos characters that are adored by children (and adults!) everywhere. A completely original game, The Beanie Boos™ Friends Game features the Ty fan favorite Beanie Boo™, Peanut the Elephant, who needs help finding all of his Beanie Boos™ friends! Players boost their skills and learn about colors, shapes and numbers in a fun way with the help of the Beanie Boos! 2-6 players, ages 4–8 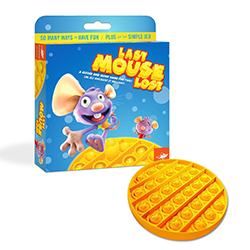 Last Mouse Lost is an affordable, self-contained two-player game. The circular rubberized board has rows of puffed up bubble-like mounds with pictures of mice on each one. Players take turns pressing down any number of mice in a single row trying to avoid being the player to press down the last mouse. It is a quick thinking reasoning, math strategy game, but with every turn, the trap can be set and your next move might be the last mouse – and you lost.

It’s all CUP for grabs in this set-collection game of quick thinking and fast hands. Roll the dice, quickly identify the missing colored shape … then try to be the first to grab the matching cup. But be careful! No cup is safe. They’re all up for grabs on the next player’s turn, and if another player holds the matching cup, anyone can grab it to complete the set. First to collect three cups wins. Ages 6+. 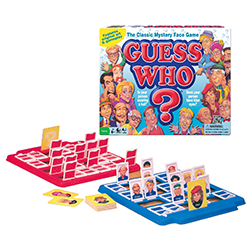 The game includes 2 plastic game units (with built-in face frames and scorekeepers), 48 small face cards to fill game units, deck of 24 mystery face cards, and illustrated instructions. The beloved 1980’s version of the classic mystery face game! There’s a mystery person on your opponent’s card. Can you find the matching face in the crowd? 2 Players, Ages 6+

Don’t forget to look for the tiny

logo on titles that we’ve previously given a full preview then visit Family Games Pt 1 to see additional family game recommendations. Of course, if you haven’t already joined our 44 Days of Giveaways, it isn’t too late. Each giveaway has daily entry options so you can start entering now and return for additional entries each day until the giveaways close!