It’s amazing what you can learn in a year. When 2014 started out, our family played board games about once every couple of weeks. Fast-forward to today and you’ll find us hunched over a board arguing about the rules at least 3 times a week. Old-fashioned board gaming has truly become an integral part of our family. You’ve seen our great Thrift Treasures nearly every Sunday and have been introduced to a number of board game publishers that you’ve never seen on the shelves at your local big box stores. But exactly what have we learned from all of this game play? We discovered that there is a whole world of board games and toys that never sit under the fluorescent lights of a local retailer, but are a much better value for your hard-earned dollars.

This year we’ve decided to salute those games that deserve a coveted spot under your tree. We could go on-and-on with fantastic offerings in any price range, but in the interest of keeping our recommendations appropriate for your immediate family or gift-buying for your extended family and friends, all of these games have a suggested retail price of under $29. Many (if not most) can be found discounted even further, especially during the holiday shopping season! We’ve provided handy links to each game’s manufacturer’s website as well as direct links so you can purchase it on Amazon. If you see a publisher that looks like they have other products that also would be enjoyed by your family, follow them on Facebook and Twitter to watch for promotions, appearances and new product announcements!

So without further adieu and in no particular order (other than alphabetical), these are our suggestions for affordable games that should be under your tree this year! 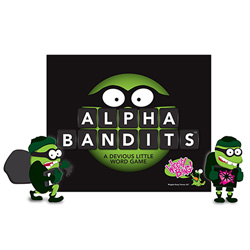 In this exciting and cutthroat word game, players race to score the most points by spelling words. But watch out for the ALPHA BANDITS! They let players grab, swap and banish letters to win the game! 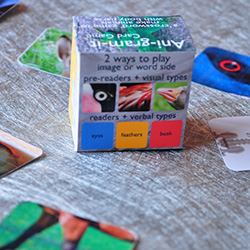 Perfect for travel and impromptu sessions of biology, Ani-Gram-It comes complete with 100 laminated, color-coded cards and can be played on a table, the floor, the grass, a picnic blanket, or any other number of spaces! It’s a great fit for the whole family, with little ones learning to name body parts and recognize different animals before they can even play.

In Dungeon Roll, your goal is to collect the most experience points by defeating monsters, battling the dragon, and amassing treasure. You become a Mercenary, Half-Goblin, Enchantress or other type of Hero. Then you boldly enter the dungeon seeking glory. The Adventurer assembles their party by rolling seven party dice, while another player serves as the Dungeon Lord and rolls a number of dungeon dice based on how far the Adventurer has progressed through the dungeon. Defeating the dragon is a team effort, requiring three different companion types. 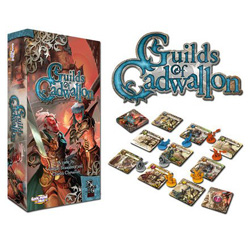 In the free city of Cadwallon, a constant shadowy struggle for power simmers just below the surface of the seemingly peaceful city. Mighty guilds vie for power, influence, and control. Using your influence and instincts, can you turn the never ending struggle for power between the guilds to your advantage? Guilds of Cadwallon is a card and miniature based game for 2-4 players. Using strategy, cunning, and a little bit of math, players try to amass the most amount of influence among the city’s many guilds and characters. Great for parties, families, or gamers looking for a something easy to learn and quick to play, 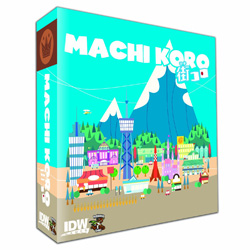 Welcome to the city of Machi Koro, the Japanese card game that is sweeping the world. You’ve just been elected Mayor! Unfortunately the citizens have some pretty big demands: jobs, a theme park, a couple of cheese factories and maybe even a radio tower. A tough proposition since the city currently consists of a wheat field, a bakery and a single die. Armed only with only this, you must grow Machi Koro into the largest city in the region. You will need to collect income from developments, build public works and steal from your neighbor’s coffers. Just make sure they aren’t doing the same to you! Machi Koro is a fast-paced light-hearted game for you and up to 3 friends. 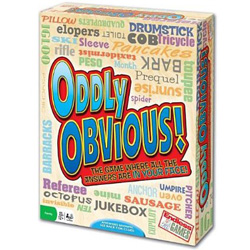 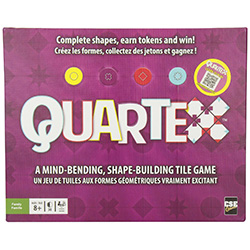 Quartex™ is an engaging, award-winning abstract strategy tile game for the whole family. A board game and puzzle in one. Match sides, complete shapes and earn tokens. Here’s the fun twist – as the number of tokens collected increases, their value decreases. Sometimes, less is more. 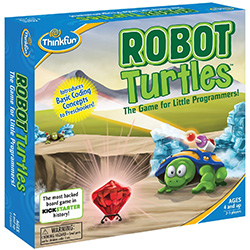 Robot Turtles is a board game for kids inspired by the Logo programming language. It provides crucial brain development and computer programming skills to children as young as 4 years old in the context of family fun. Players dictate the movements of their Robot Turtle tokens on a game board by playing Code Cards: Forward, Left and Right. When a player’s Robot Turtle reaches a jewel they win! If they make a mistake, they can use a Bug Card to undo a move. The game has many levels so, as the players advance, they will encounter obstacles like Ice Walls and use more complex Code Cards (like lasers to melt the walls). 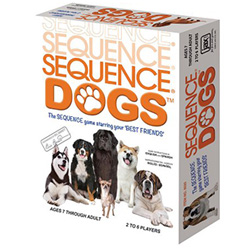 SEQUENCE has gone to the dogs! Enjoy the great game of SEQUENCE featuring a unique collection of cuddly canines. Be the first player to get 5 chips in a row by matching the pooch pictured on your cards to the same ones on the gameboard. Each card also has a brief description or fact about the breed of dog shown. So go ‘fetch’ your family and friends for a fun, strategic game of SEQUENCE DOGS! 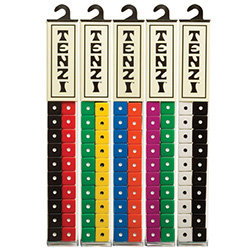 TENZI – The world’s fastest game! Everyone gets ten dice. Someone says, “Go!” Then everyone rolls and rolls as fast as they can until someone gets all their dice on the same number. Sure, there are a few more rules, but you get the idea. It’s a fun, fast frenzy! It’s TENZI.