How do we go about selecting what games to feature? The vast majority of games you hear me talk about on SahmReviews have a positive tone. Not only because we’re fans of games in general, but because not all make the cut to even be included on our site. We’re fortunate to receive emails almost daily from game companies that want their latest title featured. We have to be choosy about what we agree to because there aren’t enough hours in the day to learn, play, photograph and then write about every game out there (I wish there was!).

We’ve recently begun turning down some games because of type. As an example, card games just don’t photograph well. I mean, how many shots of a hand holding cards along with a scan of some of the card types will our readers put up with before every article reads the same? With very few exceptions, we also do not promote games that aren’t available for purchase right now on Amazon or your local retailer. There are literally 100’s of game projects listed every month on crowd-funding sites like Kickstarter. Many (most) of these never see the light of day, and even worse, some fund without ever delivering. I can count on one hand how many Kickstarter projects we have covered, and they’ve always been from companies that have already proven themselves with multiple games previously issued.

Three. Exactly three is the number of Kickstarter game campaigns we have featured. There was Calliope Games’ project last year that included nine games in one purchase, Pencil First Games’ cute GemPacked Cards set collecting card game and most recently a fantasy baseball board game by CSE Games called Fantasy Fantasy Baseball. Each one of these projects was backed by a company that had enough experience in both the Kickstarter and gaming world that we felt comfortable recommending getting in on the ground floor. Today I want to tell you about a fourth. 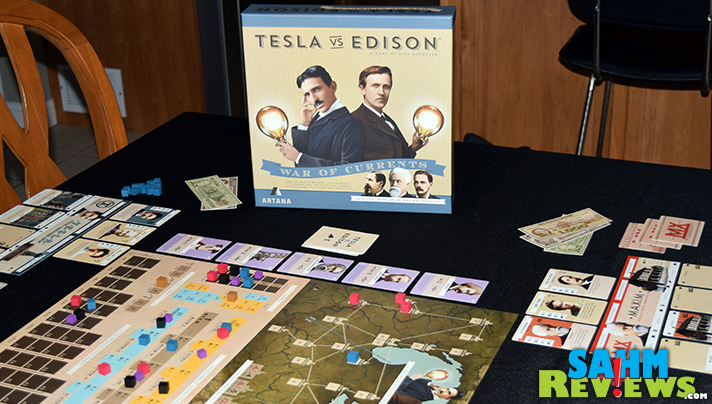 This one is a little different though because it is an expansion to an already-successful game from last year. One of the hottest Kickstarter campaigns from 2015 was Tesla vs. Edison by Artana LLC. There have been scores of stock market simulation games over the years, but Tesla vs. Edison was lauded to be more than just buy-low, sell-high. With the controversial theme of pitting Nikolai Tesla’s company against Thomas Edison’s (and three others), this game required you to choose the right path (AC vs. DC) while trying to maximize the share price of your company. 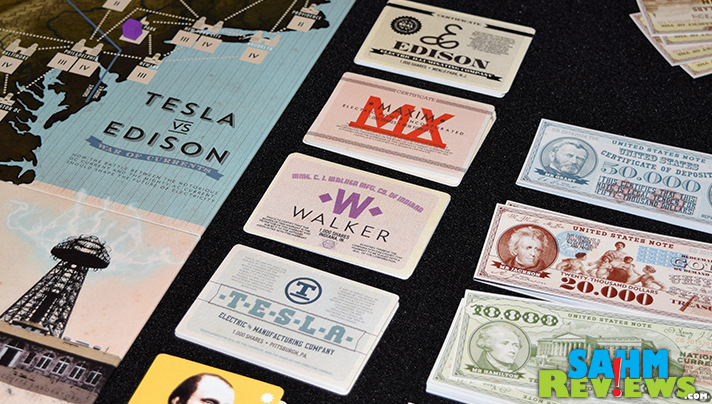 In a unique twist, if you found yourself falling behind, you could also invest in shares of an opponent’s organization and affect its price by selling at the right time (sold shares cause the price to fall). But underneath it was still a true finance-themed title with the person with the most money at the end of the game winning. 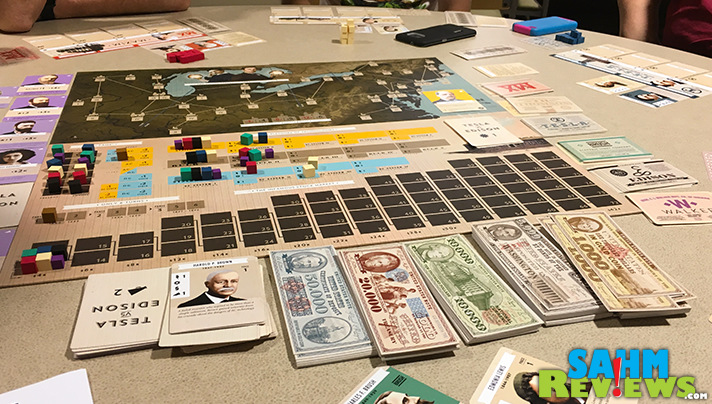 And it was a good game! We love games like this that relate to the real world, and have played Stockpile many times after featuring it last year. Sadly we never had the opportunity to play Tesla vs. Edison until recently. For good reason – they’ve been sold out! But them something interesting happened. They began working on an expansion. 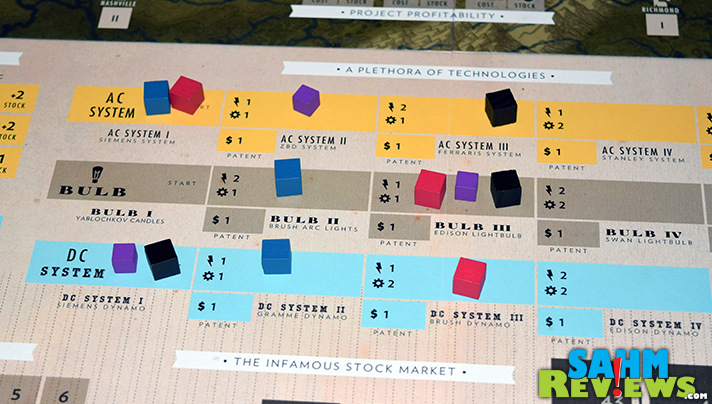 When a company typically makes a game expansion, it is usually to add maximum players, additional boards or pieces, variability or even just to update the artwork. The new Tesla vs. Edison: Powering Up is doing something I personally had never seen done by an expansion. It changes the scoring of the game completely, making for a more complex and deep gaming experience!

The base game featured five prominent inventors of the time, who happened to be all men. In this Powering Up expansion, focus has definitely shifted to the fairer sex with the addition of Madam CJ Walker as a main playable character and the inclusion of a number of female luminaries to hire to your team.

Events are also introduced that temporarily change the rules for a round or are offered up to the highest bidder to help them maintain or gain an advantage throughout the game. 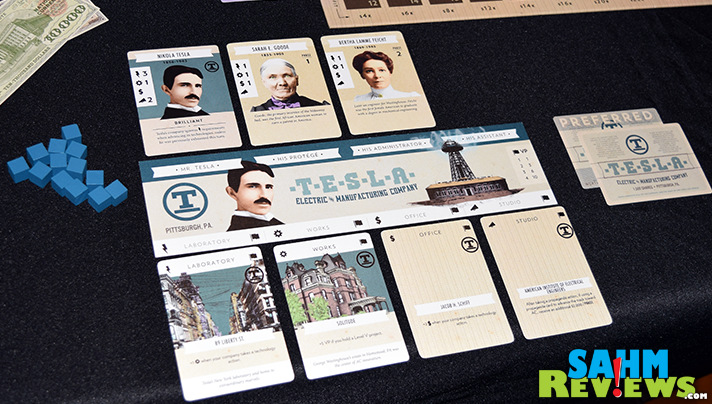 Each company can also build a laboratory, works, studio and office that also provide in-game bonuses or extra points at the end of the game.

As for scoring, this is where the real change takes place. Again, the original game was all about wealth collection with the richest being declared the winner. This was accomplished by increasing share price and multiplying it by the number of shares owned. And while this is still an important part of the game, instead of receiving cash you’ll receive victory points depending on the position of your stock in relation to other companies. 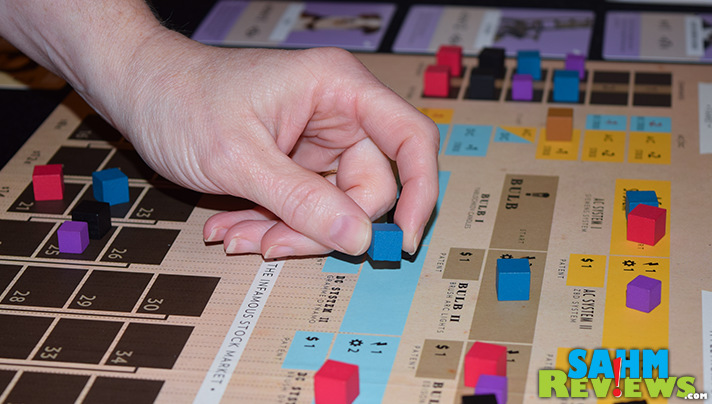 If your company was the most valuable, you’ll receive 6 points per share. 2nd place receives 5 points, 3rd gets 4 and so on. This gives you two options – go all-in on your own company or diversify your holdings and try to win by scoring in other areas.

A bonus is given for cash held at the end, highest getting 6 points, 2nd getting five (see a theme here?). Developing your buildings not only provides the in-game bonuses, you’ll also receive points for completing anywhere from one to all of them. And again, the Works building also has a bonus that is awarded if you completed its task.

If that isn’t enough, Tesla vs. Edison: Powering Up also expands the game to accommodate six players (up from five)! Yet the icing on the cake is the inclusion of a custom deck of cards to simulate an AI that allows the entire game to be played solitaire!

As of this writing there are two weeks left on the Kickstarter campaign for Tesla vs. Edison: Powering Up. This is your chance to pick up the expansion for only $25 (MSRP of $30) and a copy of the second print of the base game for an additional $40 (MSRP $60)! They have already raised more than fifteen times their funding goal of $5,000 with much more to come in the next fourteen days. With the success of their previous Kickstarter campaign for the original version, coupled with a number of other successful projects under the company’s previous name, we feel confident of their ability to deliver on their promises and you’ll receive a very good hobby game at much less than retail! And if you’re an owner of the original version, the Tesla vs. Edison: Powering Up expansion is an inexpensive upgrade that will certainly supercharge your game.

On the Tesla vs. Edison: Powering Up official Kickstarter page you’ll also find official rules, examples of all the cards included in the expansion and even an opportunity to buy a special wooden organizer to help you combine both games into one box! Follow Artana LLC on Facebook and Twitter to learn more about upcoming projects and convention demonstrations.

Who would you choose? Tesla, Edison, Madam Walker or someone else?

16 thoughts on “Tesla vs Edison Board Game Overview”