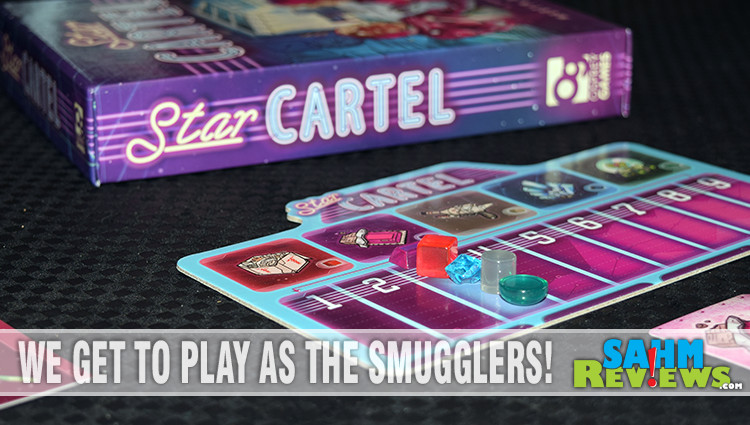 I’ve probably mentioned at least once before that I wanted to be a stock broker. I majored in Finance in college and dreamed of working the floor of the Chicago Mercantile Exchange. I considered going to New York to try and work at the NYSE, but wasn’t fond of actually living in that state. So I set my sights on Chicago.

Before graduation something happened. Well, someone happened. I met Nicole and she was content living in Iowa. Long story short, I moved to Iowa after graduation and gave up on the Merc. In hindsight it was probably a good move (Editor’s note: NO, it WAS a good move!!!). As computers got faster, the number of people needing to be employed by the exchange dwindled. Thanks to the implementation of CME’s Globex trading system, billions of trades are executed with fewer humans involved. I certainly would have been among the first to be on the chopping block over others with much more experience.

But the lessons I learned in college about finance and the stock market have served me very well in our personal lives. We became savers first, investing as much as we could while we were young. This eventually paid off by allowing us to retire early. It does have me wondering – with everything being done by computers (not “with”, but “by”), will today’s generation understand how the market works, what “risk” is and how to calculate opportunity cost?

Over the years we’ve picked up a number of games that teach stock market principles as part of the game play. Stockpile, Tesla vs. Edison and WongaMania all have mechanics that help prepare players for the nuances of managing your money in the real world. I’ve started to see some of the same ideas implemented in other games that aren’t financially-themed. We recently found one by Osprey Games that has you watching the market price to determine which goods to keep and which to get rid of. And Star Cartel is set in outer space!

Rather than just buying low and selling high, in Star Cartel you are the captain of a transport ship. A not-so-honest captain. You’re working in the black market and skimming a little off the top at the same time. Balancing what goods to actually deliver and which to keep for yourself will determine how quickly you can upgrade your ship to be able to carry even more!

Each player (up to six) begins the game with a starter spaceship that can carry up to seven goods (goods with a total size of seven). The board is set in the center of the play area with the five tokens representing the five different types of goods (food, weapons, flora, medicine and energy crystals) all placed on the “3” space. This denotes their starting value. Twelve cards are dealt out into three rows of four below the board. The rest of the cards with goods on them (contraband cards) and the deck of ship cards are set within reach of all players. 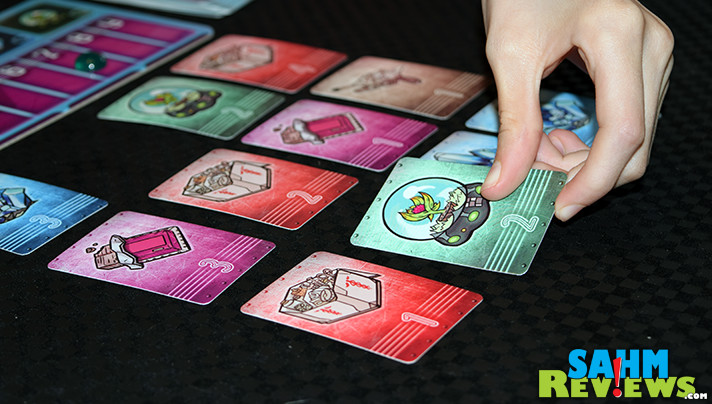 On your turn you will begin by loading your ship. Choose one card from the bottom row and then optionally one more from the same row. If the total of the cards on your ship meets the capacity, your ship is full and it is time to deliver. You may not pick up goods that would cause your ship to be overloaded, and if you cannot select your first card because there are none that will fit, you will deliver short. Otherwise, your turn ends and you will load more on your next turn. 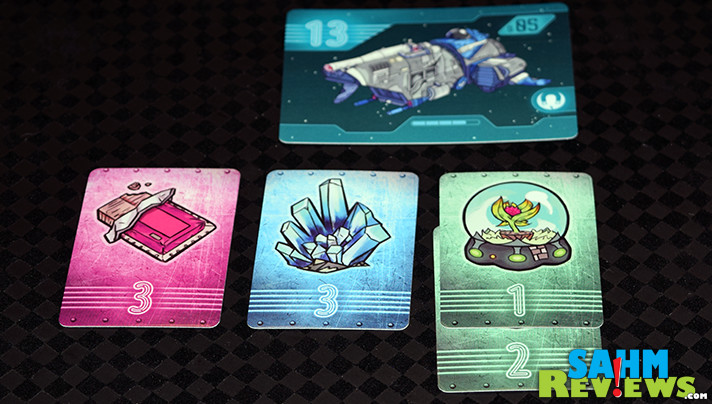 Delivering takes place whenever your ship is at capacity (or your couldn’t draw a card). Arrange your cargo by type and add up the values. The type that has the highest total value is delivered (discarded) as is the lowest-valued set. On the board you will move the token matching the high-valued set up two spaces and the lowest one down one space. From any leftover contraband types, choose one set to keep as your stash and put those card in your personal pile. The balance of the unused cards are also discarded. You may now discard your ship and draw the next one! 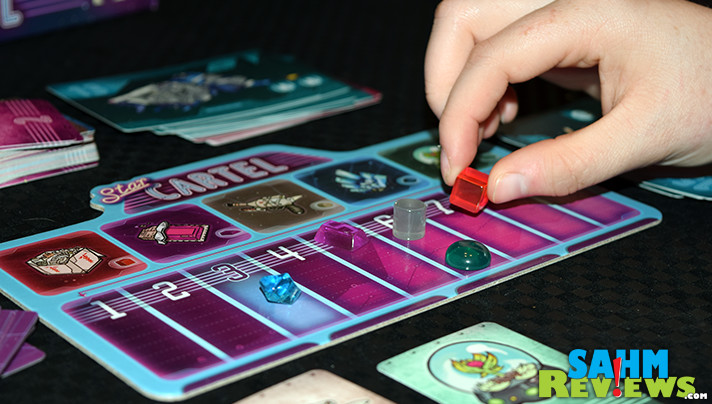 The cards are refilled up to twelve and the player to your left takes their turn. If the value of any of the goods exceeds nine, its bubble has burst and is reset to a value of one. Additionally, the value can never fall below one. Each ship type in Star Cartel has a different ability that you can optionally use on your turn. These range from redealing a row of contraband cards before you choose, moving the large set value down two instead of up (or the lowest set up one) or even being able to stash more than one set! 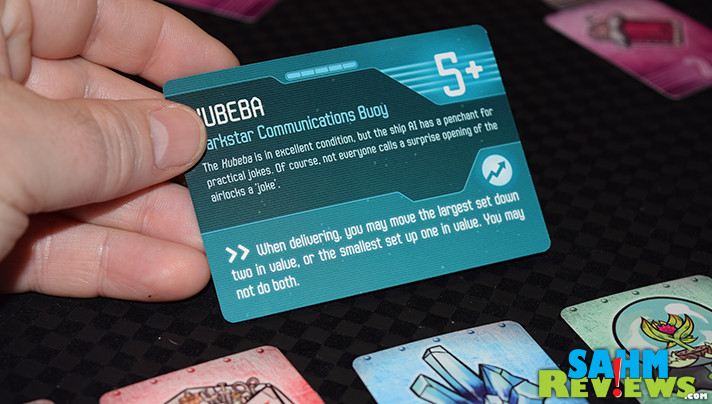 When the last ship is taken from the draw pile, the end of the game is signaled. All other players take a final turn, but with an alteration to the delivery process. If you aren’t full and cannot make a normal delivery, you may make a “rush deliver” and drop off your cargo even if not full. You still discard the highest- and lowest-valued sets and keep one other for yourself. But the highest-valued set only moves up one space (instead of two) and the lower one doesn’t change in value at all.

Final scores are determined by the cards in your stash, multiplied by their final value (the size on the card doesn’t matter at this point) and added to the dollar value of your current ship. If there is a tie, then compare size totals (it seems size does matter!) to see who is the overall winner of Star Cartel! 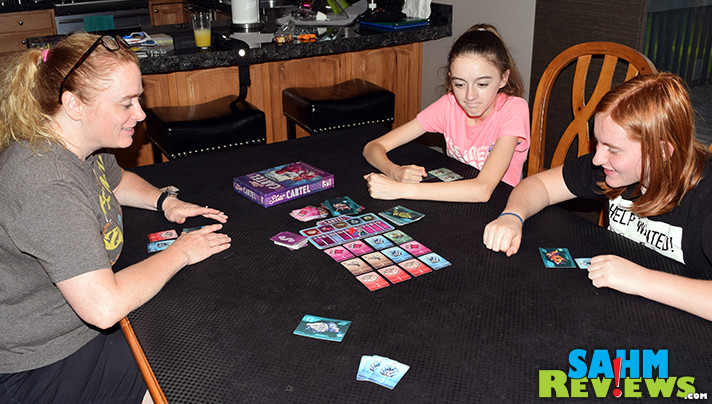 Supporting from three to six players, you can expect a full game of Star Cartel to last around 30 minutes. It’s a great example of a game teaching you to watch the market as you make decisions about which cards to draft and which to keep for yourself. And at a price of under $20 on Amazon or at your local game store, you’ll get many times that value in both entertainment and education!

What’s next for Osprey Games? You’ll have to check out their website or rocket over to their Facebook and Twitter pages to see what “out of this world” game they’re publishing next! Want to try out your money skills in Star Cartel? Enter to win your very own copy by using the form below!