Home / Recreation / Games / What’s All the Loud Noise About? 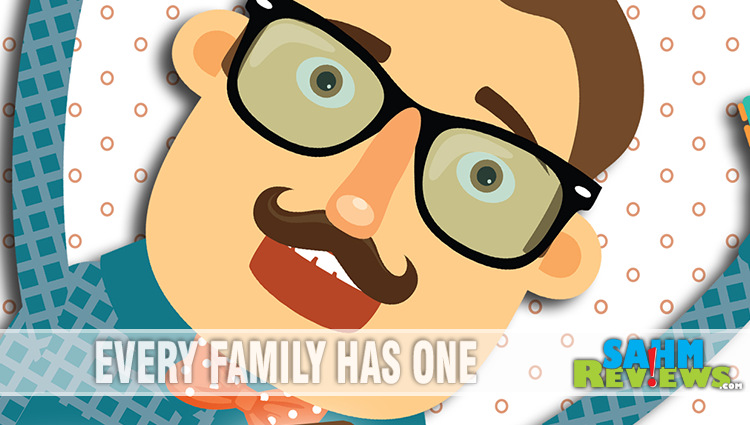 What’s All the Loud Noise About?

By now you’re tired of hearing me whine about typical issues that come with age. Slower reaction times and failing memory are just a couple things I’ve complained about recently. It’s mostly about ego – we don’t want to admit we’re not as youthful and energetic as we used to be. And when you have a teenager and pre-teen in the family who relish the opportunity of beating their parents in a game of wits, the losses are soured even more by their celebrating.

While we enjoy introducing them to more complex strategy games, they’re still kids at heart and truly enjoy some of the sillier titles we’ve found over the past few years. We have gone through so many balloon refills thanks to our constant playing of Boom Boom Balloon and Snake Oil is a consistent party game favorite. This week we had the opportunity of trying out a new title from CSE Games called “Loud About“, and quickly realized this was another one that we’re no match for. Fortunately, even though we’ll go into it knowing we’ll lose, that doesn’t make it any less fun. 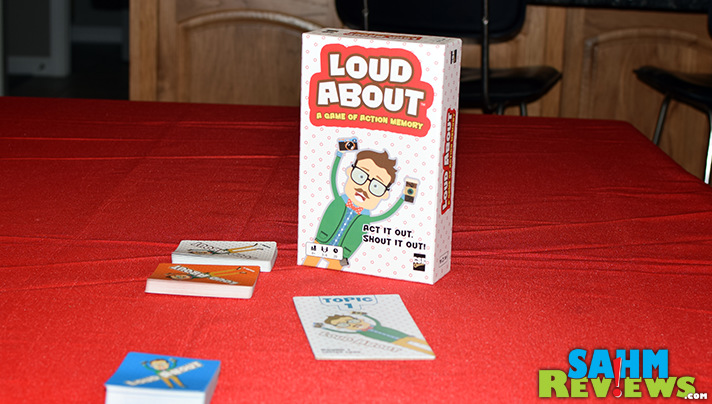 Loud About is best described as a memory, matching and reaction game mixed into one. Supporting up to six players and playing in around 20 minutes, you can expect to be asked to play a number of rounds as opponents try to overcome their defeats. 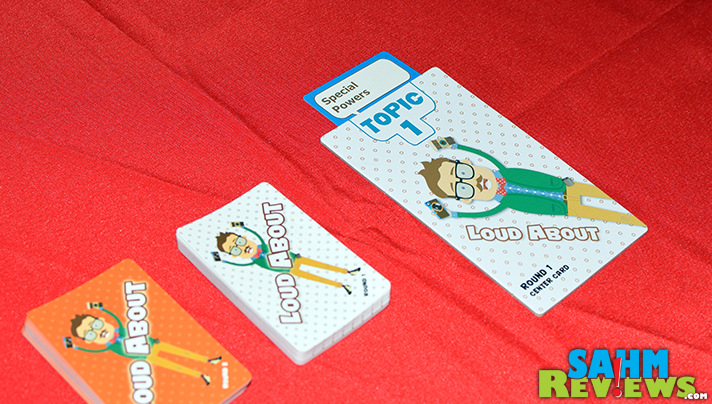 To set up the game, a topic is drawn from the deck of 28 round 1 cards and placed in the center of the table. Each contestant then uses that topic to create a “word-action”. That is, a word and action combination that matches the topic. Everyone reveals their selected word and acts out their custom movement. For example, if the topic is “Fairy Tales”, you might choose “Peter Pan” and stand up and pretend to fly around the room. The next person might decide upon “The Big Bad Wolf” and perform an intimidating growl. There are no special rules for the words or actions, other than matching the category. Pay attention closely, you’ll need to memorize all of these combinations.

Then a “slap tile” is selected from the seven possible choices and also shown to everyone. It is then placed face-down in the middle of the playing area as well. Lastly, shuffle the 28 round one cards and 30 round two cards into their own piles and set them within reach of everyone.

Starting with the youngest player, draw a card from the top of the round 1 deck and place it face-up in front of you. As you draw additional cards, they will be placed on top of your previous one. If the flipped card matches the hidden “Slap Object”, the first player who slaps the tile wins the flipped card and adds it to their victory pile. 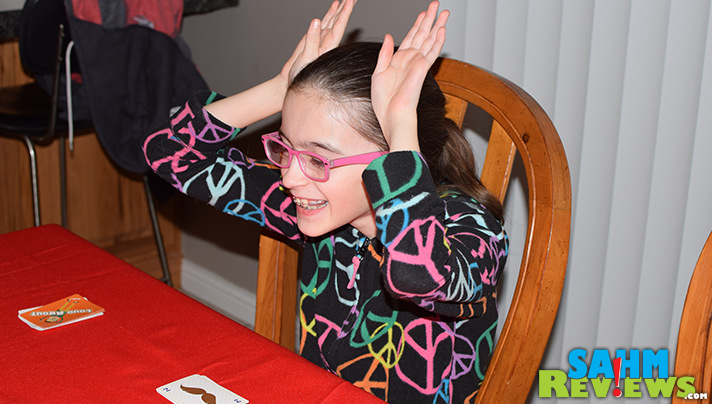 If any two players have matching top cards, they have a face-off. The first player to shout out AND act out their opponent’s word-action combo wins their top card. You can keep trying until someone gets it right, but the first person to do so is the winner. If neither player can recall it correctly, it is considered a tie and the last player to go draws another card. Of course, winning a card may create another match with someone else thanks to the newly-revealed card underneath, so another face-off would occur immediately! 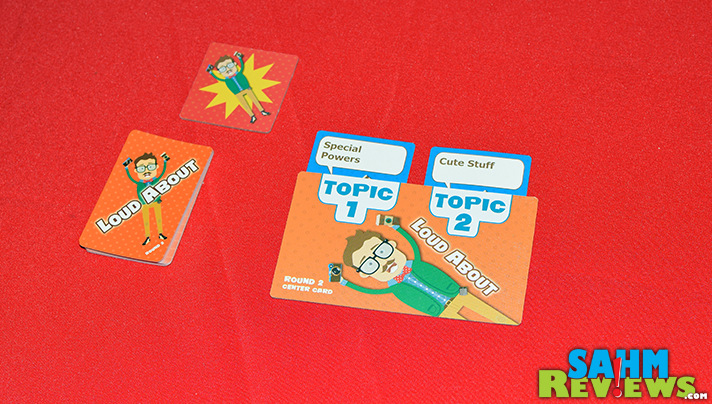 The round ends when all cards from the Round 1 deck are used, and preparations for Round 2 begin. This is where things get VERY tricky. Not only do you use the same topic (and word-action combos) from the first round, another topic is chosen and new word-action combos are developed. 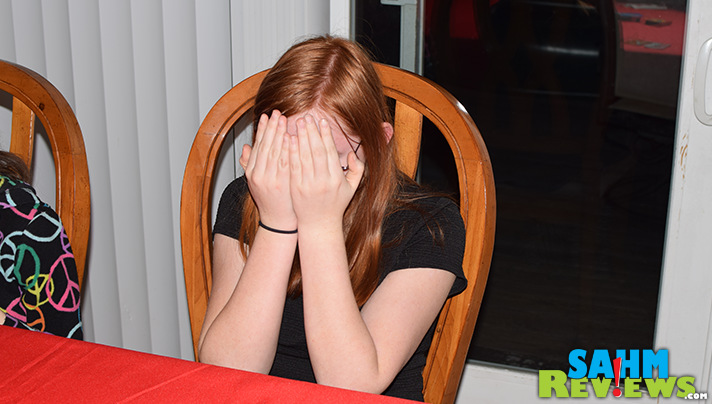 Now when there is a match creating a face-off, you must look at your opponent’s matching card and the small number printed on it. Your correct answer will be your opponent’s word-action combo from the topic number currently in play! It may still be round 1 / round 2, or there might have been a swap card drawn previously that forces the topics to change place. Now round 2’s answers correspond to topic #1! Think you’re confused now? Just try to play it successfully! 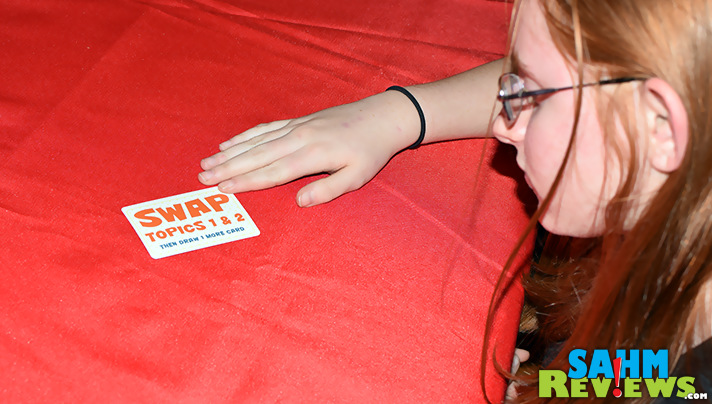 After that deck is depleted, the game ends and the person with the most captured victory cards wins. I’ll lay odds that it won’t be an adult, but someone in the 8-14 age range.

Loud About is definitely a game that gets harder as the number of players increases, and thankfully the level of fun and silliness also grows. There was no way my late-40’s brain could remember a total of 10 word-action combos, much less recall who created them. I had difficulty remembering my own!

But for under $15, we think Loud About warrants serious consideration if you’re looking for a family (and party) card game that won’t leave everyone too embarrassed. Sure, the silly actions might be off-putting to the super-reserved, but those aren’t the people you’d invite to play this type of game in the first place. I can only imaging what having a couple pints in you might turn this game into!

Find a copy on Amazon or direct from CSE Games! Or better yet, win a copy for yourself by entering our giveaway below! And keep an eye out for the retail release of Fantasy Fantasy Baseball which we featured last fall – we’re as excited to see the final product as you are! Watch CSE’s Twitter and Facebook timelines to find out exactly when it’ll be on store shelves!

How are you at memory games? Would you win or just play along?

19 comments on «What’s All the Loud Noise About?»