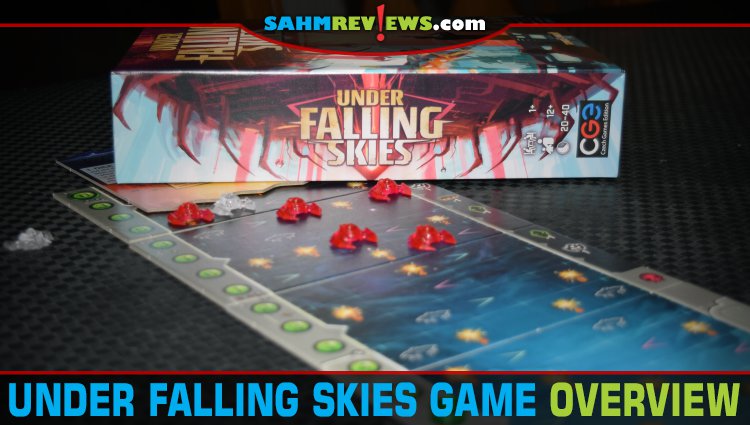 Do you ever find yourself going down a rabbit hole and wonder how you ended up so far off on a tangent from where you started? I had that happen recently… I went from The Mandalorian show on Disney+ to Under Falling Skies, a board game from Czech Games Edition. I feel the need to chronicle the process so I know I’m totally losing my mind. As we await the release of the next season of The Mandalorian, I’ve been thinking a lot about the show and its characters. One in particular that I have a love/hate relationship with is Giancarlo Esposito. The breadth of his talent is apparent in all his work including Breaking Bad and Revolution, two shows that we were very invested in. Around the same time that we were immersed in Revolution, we also enjoyed a series called Falling Skies (starring Noah Wyle). As a result, I often associate the two shows with each other. When CGE released their solo campaign game, Under Falling Skies, I naturally remembered all of this.

As I sit here today thinking it will be forever before the next season of The Mandalorian begins, I’ve decided it’s a good time to put that angst to work and play the solitaire game that was at the end of the rabbit hole. If you’re curious about the game, keep reading! While it’s designed as a solo game, you can involve other people by creating group discussions on how to proceed. Set up the game by laying out the boards to what looks like a video game, returning unused pieces to the box. Place the excavator, research, energy and damage markers on the designated spots. Set the enemy ships on the drop points on the mothership tile.

You’ll begin with the standard, starter game then advance through an assortment of campaigns. Each has different requirements and components so be sure to check the instructions for each campaign before beginning.

During setup, you’ll notice that the city tile has iconography to indicate which of the double-sided base tiles are used along with which side and their orientation. The sky tiles are double-sided as well with one side creating a more difficult experience. The goal of Under Falling Skies is to get your research marker to the top of the track before the aliens destroy your city. Each round will consist of three phases beginning with the Dice Phase, moving to the Rooms Phase and finishing with the Mothership Phase.

Roll the five dice (three gray and two white) to begin the dice phase. Four of the dice are placed in spaces that have been excavated (more on that in a minute) while one may be placed in an unexcavated space. You’ll set one in each column, but will reroll all remaining dice each time you place one of the white ones. The value and placement of the dice will determine the actions you take. But it’s a gamble when you use higher numbers. While the offer more benefits, they also allow enemy ships to descend more. Any ship that moves beyond the sky and into your city causes damage before returning to the mothership for another pass.

A die that is in an unexcavated space allows the excavator to move that many spaces, clearing the way and making those spaces available to use on future turns. You’ll have to plan carefully to ensure that you have a die with a face value that allows the dozer to move AND is a column not occupied by another die in the excavated area!

Each space offers some kind of benefit to be resolved during the room phase. You can remove the dice in any order or choose to forgo an action and remove the die without cost. Energy rooms generate power to be used in other rooms. When a die is deployed to these rooms, you’ll move the energy marker the value shown on the die when removing it during the room phase. The gun room causes ships in that column to descend one less space than the pip value. Multi-space rooms only activate if all of the associated spaces are filled. Jet fighter rooms destroy alien ships residing on lower numbered explosion spaces in the sky. Research rooms advance the research track, which as you recall is what you need to do in order to win! Unfortunately, the number of spaces you move is a calculation and not simply the value on the pip so it isn’t as easy as it sounds!

Finally, it’s time for the mothership to act. You’ll begin the phase by moving the mothership (you know, like Space Invaders!), resolving its actions then spawning new ships. The actions are determined by the drop points and will change each round as the mothership continues to descend from the sky. These actions may involve moving the excavator backwards, decreasing the research marker, spawning new ships or causing you to immediately lose. Before starting the next round, you’ll spawn ships that will begin their attack the following round.

You’ll continue this process until you either complete your research goal or the enemy reaches their objective. Once you’ve completed your first game, increase the threat level by flipping sky tiles, changing cities or installing robots. The campaign mode will allow you to immerse yourself deeper into the story. If you enjoy Alien movies and shows, Under Falling Skies is an opportunity to bring that theme to the game table. Ask your local game store if they have it in stock or toss it into your Amazon cart the next time you’re having essentials delivered. Follow Czech Games Edition on Twitter and Facebook to see if aliens or other excitement is arriving soon!

Why types of games do you enjoy playing in solo mode?