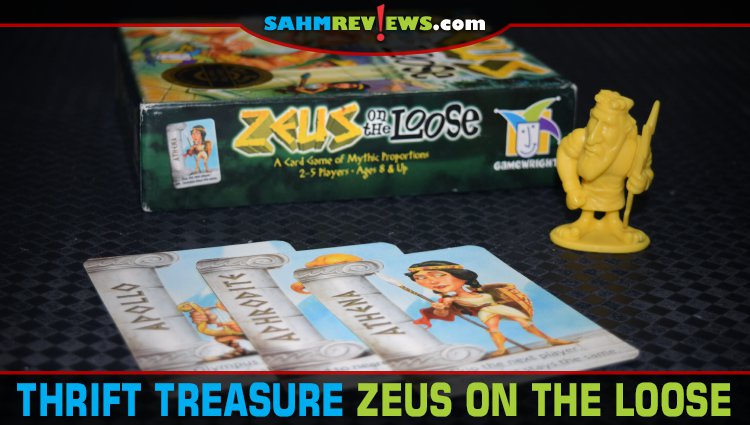 Typically, when we find a game at thrift, we want to make sure everything is present inside the box. Custom parts and pieces can be difficult to replace or substitute. And rulebooks are just as important if we want to find an inventory list and learn how to play. Fortunately, there is one publisher we know has our backs when the rules go missing – Gamewright.

For several years, Gamewright has made all the rules for their games available for free on their website. When we found this copy of Zeus on the Loose at Goodwill, we knew the missing rulebook wasn’t a problem. In fact, we were able to pull up their copy in pdf form and double-check that all the other components were present before leaving the store!

Shuffle the deck of fifty-six cards and deal out four to each person (Zeus on the Loose supports 2-5 players). The rest of the deck is set in the middle of the play area as a draw deck along with the included plastic Zeus figurine. The game starts with the player whose first name begins with the letter closest to “Z”.

The object of Zeus on the Loose is to win rounds by making the discard pile add up to or exceed one hundred while holding the Zeus figurine. On a turn a player will play one card from their hand to the discard pile and add the card’s value to the running total of cards played previously. Number cards will be simple addition. If your new total is a multiple of ten (10, 20, 30, etc.), then you take Zeus into your possession.

If someone plays a card which you also have in your hand, you may play it immediately (out of turn) to the top of the pile and announce the new total. Take Zeus and then continue with the person on your left as the skipped players between the prior person and you lose their turns. Don’t forget to draw back up to four cards in your hand at the end of every turn. If you forget, you must play the rest of the round with one card less!

Random Greek God cards employ special actions. For instance, Apollo and Artemis allow you to steal Zeus without changing the value of the discard pile. Athena skips the next player while Hera changes the current value to 99 and awards you with Zeus. Hermes is a fun one to play as he reverses the digits of the current total. Forty-seven becomes seventy-four and three would become thirty!

Like a game of “HORSE”, each round you win earns you a letter for the word “ZEUS”. The first person to win four times, thus completing the word, wins Zeus on the Loose! Although originally published 15+ years ago, this Dr. Toy Product of Excellence winner is still available brand new on Amazon or direct from Gamewright on their website!

What other publishers offer their rules free-to-print?