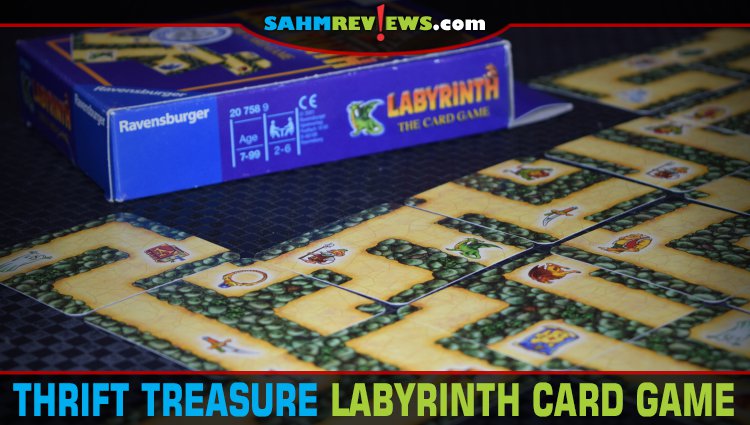 Something I enjoy about shopping for games at thrift is the off chance we’ll find something we’ve never seen before. This happens quite often. There have been so many games published over the years there is no way one could be familiar with them all. I especially love finding oddball titles that have had limited release.

When I think of games I’ve been surprised by, a few come to mind. Operation Aflac is one which was only available to customers of the insurance company. This copy of Octiles appeared to be a first edition in a plain-ish brown box. While at Goodwill last week we came across a variation of the classic Ravensburger game of Labyrinth, the Labyrinth Card Game.

We’re familiar with the original game of Labyrinth but had never heard of this small spinoff. Originally published in 2000, this tile-playing game supports up to six players aged 7+. Inside the box are fifty square cards and a set of instructions – that’s it! Shuffle the deck and deal out two to each player to form their starting hand. Then deal out four more into a square in the center of the play area, forming the labyrinth.

Cards feature paths through the maze and depict different treasure types. On your turn you will play one card from your hand to the labyrinth, connecting a path and adjacent to a previously played card. If you can match a treasure on your played card to one on the same path in the labyrinth, you collect the card as a point at the end of the game. That is, if it doesn’t disconnect any other cards from the maze. The paths don’t have to continue, but all cards must be connected orthogonally.

If you are lucky enough to match two different treasures, or even connect paths to match three of one, collect both prior cards, following the same restrictions about disconnecting. If you cannot play a card that matches anything, you must still add one from your hand to the labyrinth. At the end of your turn, draw another card back into your hand. Players take turns until both the deck and all cards in players’ hands have been played. The person with the most cards collected wins Labyrinth: The Card Game!

This version of Labyrinth is long out of print. You can find gently used copies on eBay for very reasonable prices (original MSRP was $11.99). After researching, it turns out there are other Labyrinth variations we’ll need to find for our collection. We’ll be looking for Treasure Hunt, Oceans and Duel next time we thrift shop!

Have you played any of the Labyrinth spinoffs?