I had never looked forward to the days when my daughters exited the world of being children and began referring to themselves as teens and tweens. Anyone who’s had children know that this age brings a myriad of new things to discuss, experience and argue about. Some days I wish I could just turn back the clock.

Watching movies, either at home or at the theater, has provided us with some great subjects to talk about over dinner. Sometimes it’s more meatier subjects like women’s rights or historical facts. Most often we’re discussing plot lines of the latest Marvel movie. Since those are only released a couple times a year, we’ve been looking for other great movie series to watch. Now that the girls are a little older, we’ve been comfortable letting them watch some of the PG-rates movies from when we were young. This is back before the MPAA revised the rating system, adding PG-13. Some of those older PG movies were quite risqué!

One of our favorites we recently binged with the girls is the Back to the Future trilogy. Not only has this series stood the test of time, it is amazing to watch 30 years later and see how many of their predictions have come true. They even missed the Chicago Cubs winning the World Series by only one year! I blame Biff for the difference – he must have altered the timeline somehow and delayed it until 2016. 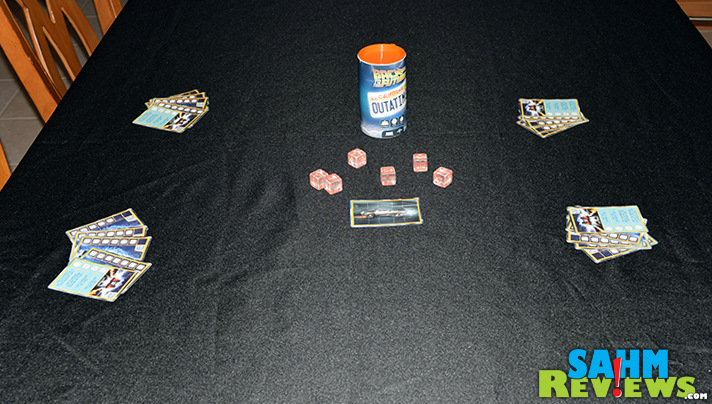 It was also 2016 when we picked up a copy of IDW Games‘ themed Back to the Future: OUTATIME dice game. Although there have been a number of games created with a Back to the Future license, I realized I had never played a single one! And with Nicole’s love for rolling dice, we knew this would be a perfectly-timed fit for our family.

We’ve played a number of themed dice games over the years, and ones like Ninja Dice and Martian Dice are a regular part of our game night bag. I expect that thanks to the compact design of Back to the Future: OUTATIME, it too will find a home among our other regularly carried games.

There’s actually a little more depth in Back to the Future: OUTATIME than the other two previously-mentioned dice games. Each person is constructing their own time-travelling DeLorean and must use the dice to help generate enough power (1.21 Gigawatts) to open a Temporal Displacement, allowing the car to travel back and forth in time. 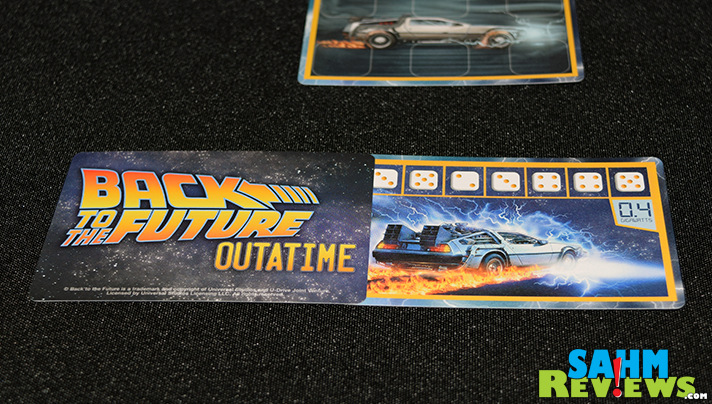 Players are dealt identical hands of five Power Cards and may select which to complete first by laying it face up in front of them. Then they will also select which they want to complete second and lay it face-down to the left of the face-up card. This will be used to track progress on the active card, then flipped over once the card underneath is completed. It then becomes active, and the next one in the deck is placed over it, also tracking progress. 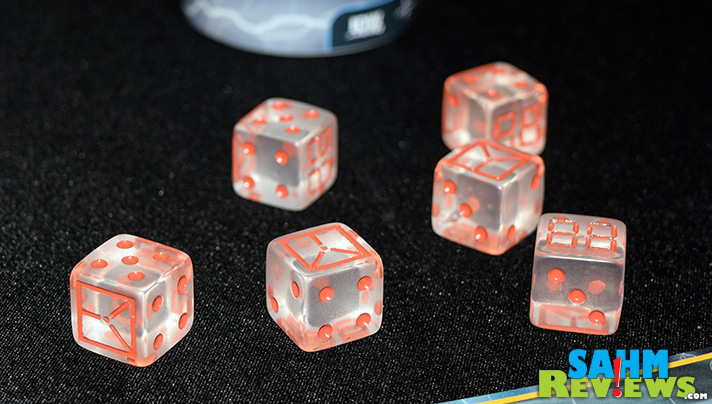 Each Power Card shows dice faces that must be completed in order. The custom dice have four standard number sides and two unique symbols. The Flux Capacitor symbol can never be re-rolled and are set aside for the rest of the turn when rolled. The 88mph result may either be locked or saved for a reroll. 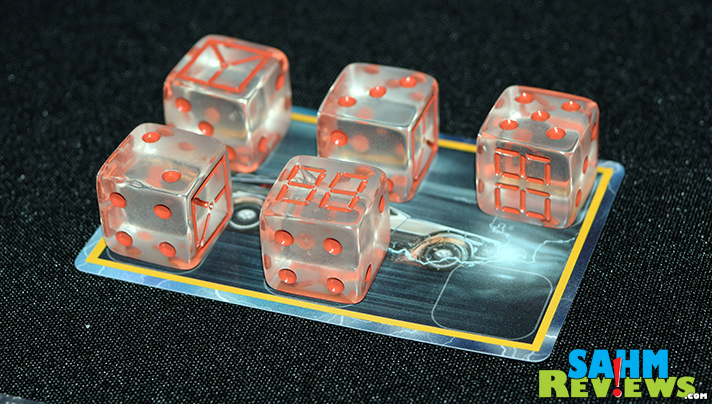 On your turn you are trying to add at least one die to the active card each time you roll. If you do, you can reroll the rest of the dice. At any point that you roll and cannot add a die, your turn ends and you must move covering card one space to the left, revealing the next left-most die on the active Power Card. 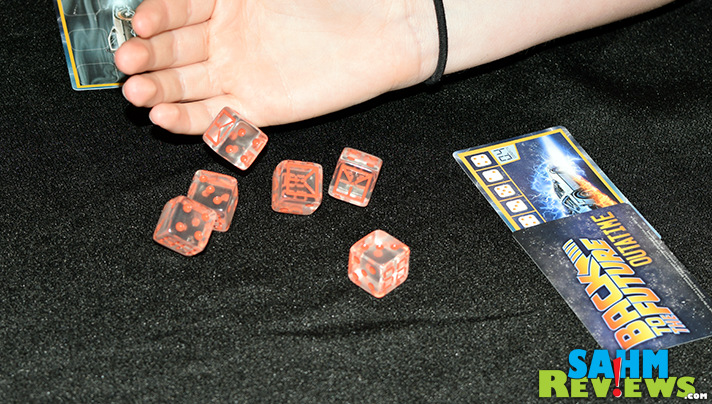 If you manage to add all six dice to the DeLorean Card, you can choose to take back all numbered dice and continue rolling. But now the risk is greater, because if your call stalls (you cannot add any dice to the active card on a roll), you’ll move down TWO spaces on the Active Power card instead of just one! 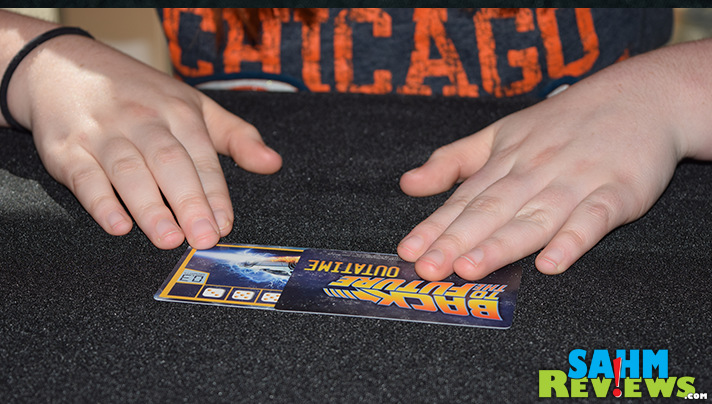 A combination of two Flux Capacitor and two 88mph dice on your car creates a Paradox. This allows you to gain one space on your active card and at the same time requiring all opponents to lose one space. Three of each doubles the reward and penalty! The other feature preventing non-turn downtime is called the Ripple Effect. Any time a person docks one of the number dice to their card, it creates a Ripple Effect. This allows any player who has the exact same number next in line on their active card to complete it right away! So it makes sense to consider whether or not you want to place that number you just rolled or to earn it a different way (like with a Paradox). 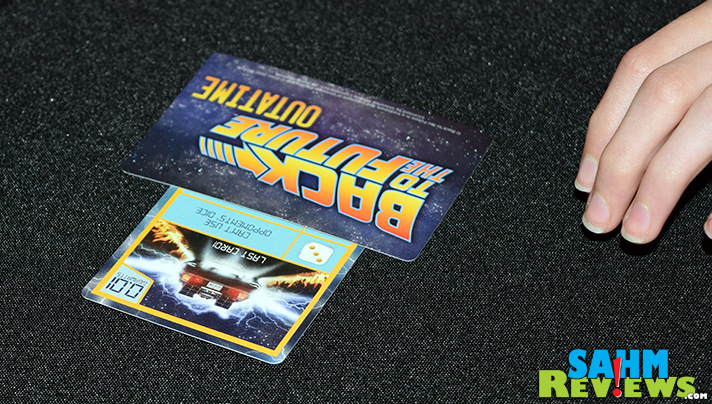 Once you have completed the first four Power Cards in Back to the Future: OUTATIME, the last card is made active. This .01 Gigawatt card plays a bit differently – it must be completed from bottom-to-top instead of left-to-right. Ripple Effects will not affect this card either – you must do this one all on your own! The first player who completes all five Power Cards wins the game! 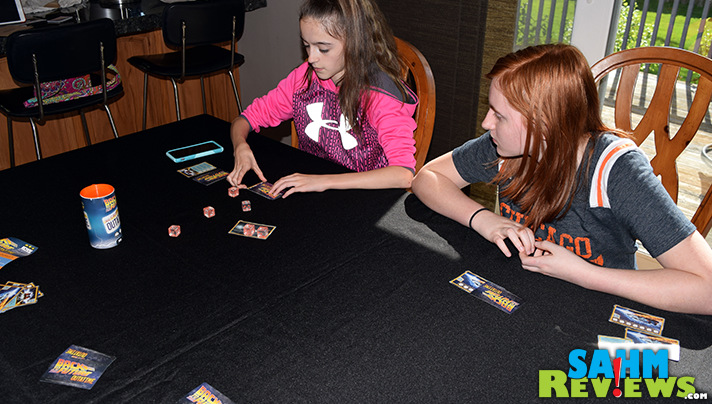 Back to the Future: OUTATIME is available on Amazon for under $12 shipped and is worth the price just for the awesome themed dice. The way in which IDW Games combines dice rolling with card-based objectives makes this a much more satisfying title than a traditional push-your-luck dice game. The Back to the Future property has remained popular for well over three decades, so we see no reason for it becoming stale any time in the near future.

IDW Games issued another Back to the Future themed game last year and is now offering a different 80’s icon in the form of a game – Teenage Ninja Mutant Turtles! Check out their website or follow them on Twitter or Facebook to find out if those should also be in your collection!

Which of the Back to the Future movies was your favorite?

11 thoughts on “Back to the Future Dice Game Overview”