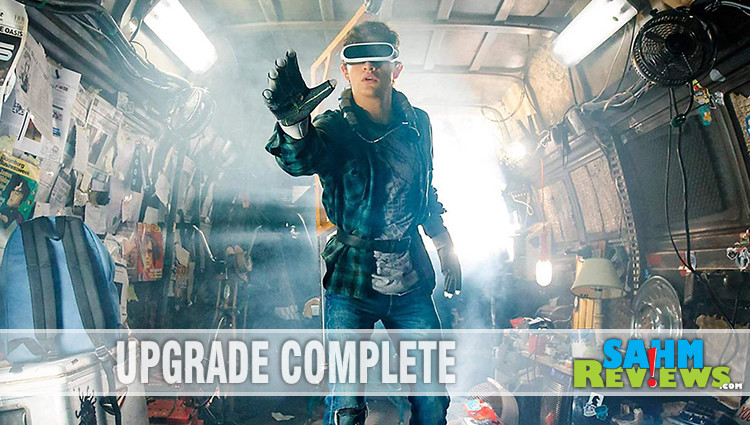 It’s a common complaint of adults that kids spend too much time with their noses in one type of digital device or another. Whether it’s a smart phone, tablet or laptop for a variety of functions both online or offline or some type of gaming console, there is no lack of opportunity for them to engross themselves in something outside the realm of the real world. But the reality of the situation is that we, as a society, are connected to things that inspire us, move us emotionally and give us a reason to cheer, think or act whether it’s offline or online. We become fans of books, TV shows, movie characters, video game personas, board game franchises and more. It allows us to temporarily escape from the things that are weighing down our shoulders.

When I saw the trailer for Ready Player One, the sheer number of pop culture references in the movie made me want to see it. Star Wars references, the Back to the Future Delorean, Overwatch characters, iconic T-Shirts and so much more. It was like a time capsule of so many icons from different phases of my life. Scott ordered tickets for us to watch it in IMAX on opening weekend and I’m so glad we did. It was fantastic.

Let me start by saying two things: First, I never read the book (although now I want to). Second, there aren’t any spoilers here so don’t worry about that. With respect to comparing it to the book, I’ve heard Spielberg took some liberties with the story, but since I’ve not read it, I cannot attest to that. What I can say is that if you go to see it, just sit back and enjoy the movie for what it is: Entertainment. Eye-opening entertainment.

Ready Player One takes places in Columbus, Ohio in 2045 part of the time, but in the OASIS the rest of the time. The OASIS is an immersive virtual reality world created by James Halliday, Upon his passing, an an announcement was made of three Easter Eggs built into the virtual world. The first person to discover them would become the new owner of the OASIS. But you know as well as I do that digital commerce is big business. The current leaders of the OASIS were hiring young talent; arming them with gear and tools in order to ensure IOI would maintain control. It’s not beneath them to kill in order to control.

Which got me thinking… Is Ready Player One the 1984 of 2018? Are we foreseeing the future of immersive technology? Has author Ernest Cline predicted the future of virtual reality and digital entertainment in the same way that George Orwell predicted our current world of everything we do and everywhere we go being monitored and tracked?

Think about it. In the past year, we’ve seen a rise in gamers for hire with multi-million dollar eSports teams being assembled and stadiums under construction. Young adults are being offered solid, real wages for playing video games. That, coupled with our current obsession for constantly being online, is a clear indication that we are on track to a real-life OASIS of some sort. Whether it’s created by Jeff Bezos, Mark Zuckerberg, Blizzard Entertainment or the next digital mastermind is yet to be determined. One thing is for sure, when you walk out of the movie, you may find yourself thinking how familiar the story line is… and perhaps wondering what it will be like in 2045.