I had been looking for a themed dice game for a while after seeing some friends play Zombie Dice at our local game gathering. These types of games are usually pretty good value for your dollars and allow an almost unlimited number of players. Perfect for an impromptu family gathering or a quick couple of rounds between longer games with friends.

By pure coincidence I noticed a post on my Facebook timeline by Tasty Minstrel Games advertising their highly-rated game, Martian Dice, for under $8 shipped! After inquiring on a couple Facebook game groups, the consensus was that Martian Dice was a better version of Zombie Dice, and since it was now cheaper, was the one to get. 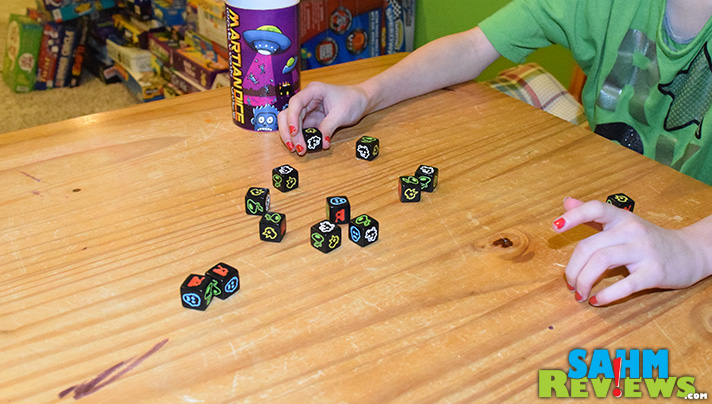 As I mentioned, Martian Dice accommodates any number of players and each game will last only 30 minutes at best. Of course, if you’re throwing a 40-person party and they all want to play, you either have to budget more time or buy multiple copies!

There are thirteen dice included that are all identical. Each die has five different symbols on them – a chicken, cow, human, tank and a death ray on two of the sides. You play the role of invading Martians trying to abduct the humans, cows and chickens, while fending off the tanks with your death rays. 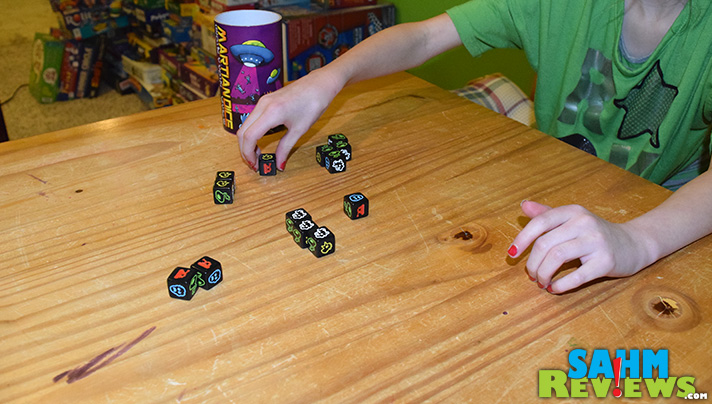 Roll all 13 dice and set aside the tanks (required). These are your enemy and you must field at least as many death rays to defeat them. After the tanks are pulled, you then choose one of the other face types (cow, chicken, human or death ray) to save. Set aside all dice that match the icon you choose and reroll the remaining dice.

You repeat this pattern until you can make no more valid rolls or if you choose to end your turn. Ideally you’re trying to end your roll with more death rays than tanks, and as many abducted Earthlings as possible. But here’s the catch – once you abduct cows (or humans or chickens) during your roll, you cannot abduct them again. Death rays you can always select, but you can only select one category of Earthing once per turn. So you have to plan your invasion effectively!

Make sense yet? Our budding reporter and “Game Genie” Kennedy wants to show you a live turn so you can get a better feel for it. Let’s see how she rolls!

Like Kennedy mentioned, you take turns rolling until one player hits 25 points. Then everyone else gets to complete the round and the highest score wins (if more than one exceeded 25).

I hinted above about Tasty Minstrel Games‘ admission that they ordered too many copies during their last run. Their oversight is now to our benefit. You can pick up a copy of this great game for only $7.95 shipped via Prime on Amazon right now! And as always, see what else they’ve got in the works by checking out their Twitter and Facebook pages.