There’s no lack of push-your-luck dice games on the market today. And we’ve covered quite a number of them over the years. Martian Dice and Ninja Dice both are basic intros to the genre. Similar mechanics can be seen in popular titles like Dicey Peaks and Dice Heist. And while Yahtzee is technically the granddaddy of push-your-luck dice games, there’s really one other title that is responsible for bringing the idea of losing your turn due to a bad roll to the forefront of modern games – Zombie Dice.

Zombie Dice isn’t new to the store shelves, having been originally released in 2010, well before any of the previously-mentioned games. In fact, one may argue that many of them are just variations on Steve Jackson Games‘ hugely popular zombie-themed dice rolling game. There’s probably a lot of validity to that statement and up until now one could scratch their dice itch by selecting whatever theme suits them best. But last year’s brand new release in the Zombie Dice line may change your mind. 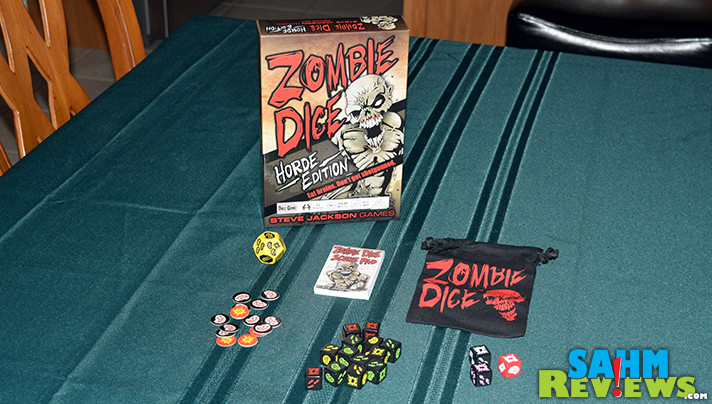 Zombie Dice: Horde Edition made it’s debut at last year’s Gen Con convention in Indianapolis to rave reviews. It wasn’t a new game, but a new edition that combined the previously-released Zombie Dice, Zombie Dice 2 and Zombie Dice 3 into one convenient box, saving the consumer about 25% over the cost of purchasing them all separately.

In case you’re not familiar with the original game of Zombie Dice, let’s take a quick run-through. Two or more players compete to collect the most Brains (yes, you are playing as zombies) by rolling dice. For the base game you are using only the red, yellow and green dice, all with custom symbols in differing ratios. A Brain symbol means you ate your victim’s brain. A Shotgun symbol represents the victim fighting back. Footprint symbols means your victim escaped unharmed.

All thirteen dice are placed inside the included felt bag and on your turn you will draw three and roll them. Any shotgun results are set to the side and kept. As are Brain symbols. At this point you must decide whether to keep rolling or score your Brains. If stopping, receive one point for each Brain collected and pass your turn to the next player. If still moving forward, take any Footprint dice and draw additional dice from the bag until you have three to roll. Resolve the new results in the same manner, setting aside all Brains and Shotguns and deciding whether or not to continue. 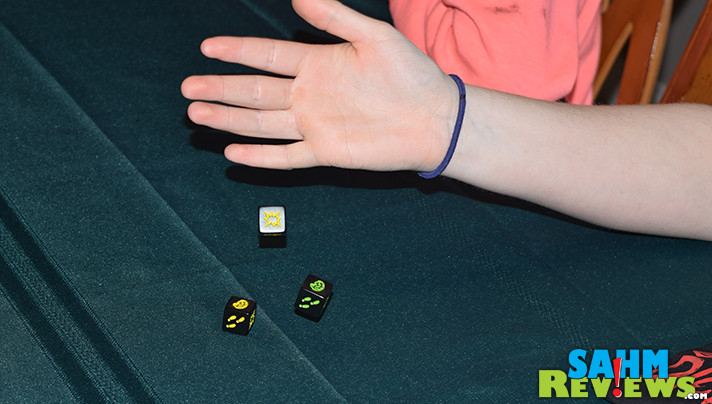 If you collect three Shotguns during your turn, your turn if over and you score nothing. If you are lucky enough to run out of dice in the bag before collecting three shotguns, score your Brains and return them to the bag so you may keep drawing and trying to add to your score. Once any player has 13 or more Brains, finish the current round so all players have had the same number of turns and then the zombie who has amassed the greatest number of Brains wins Zombie Dice. 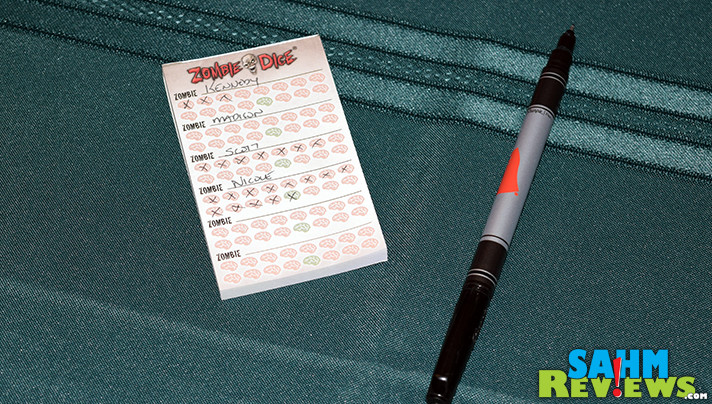 The first expansion, Zombie Dice 2, puts the game into the setting of a big summer action movie and additionally introduces Santa Claus into the mix. Billed as a double feature, the first part of the expansion adds two dice to the game, a Hunk and a Hottie. These replace two of the yellow dice and have additional symbols on some faces. They are drawn and rolled as normal, with the exception that the Hunk die has a double-shotgun side (counts as two Shotguns) and a double-brain side (counts as two Brains), while the Hottie die has a much higher chance of running away. 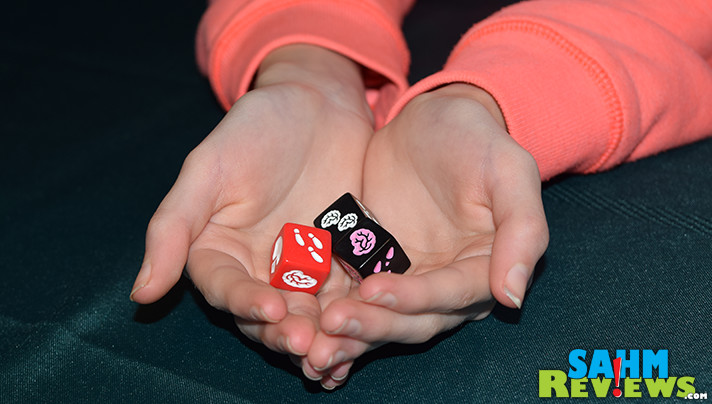 The second part of the first expansion introduces a red Santa die with brand new symbols and replaces one of the green dice. Brains, double Brains, Shotguns and Footprints are still represented, but now an Energy Drink (turns any future green Footprints into Brains) and a Helmet (now takes four Shotguns to kill you) are two new gifts that Santa provides. And if playing with both the Action Heroes and Santa, the Heroes can rescue Santa and Santa can rescue them!

Zombie Dice 3: School Bus was the second expansion to the Zombie Dice game and really begins to change the flavor. This giant 12-sided die is not placed into the bag with the other dice. It is rolled optionally after rolling the standard three drawn dice. Any time after rolling three dice you may declare, “I’m trying to catch the bus.” and take the School Bus die instead of one of the dice from the bag when rolling again. 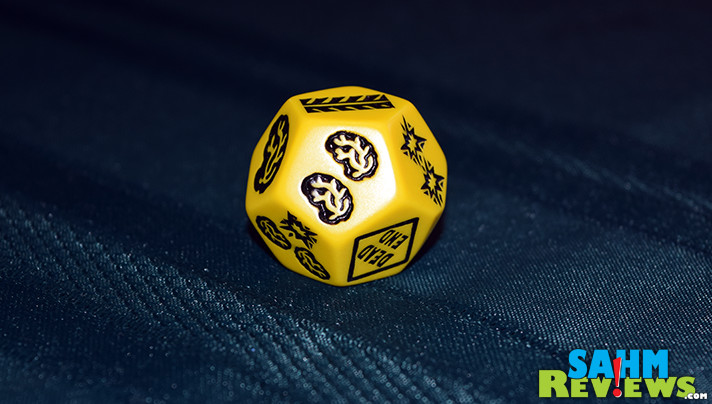 Results of the School Bus die will vary from a normal Brain (take a Brain counter to keep track), a Shotgun (take a Shotgun counter when this is the result), a Stop Sign (forces you to end your turn right away), a Yield Sign (turns all Shotguns into Footprints), a Dead End sign (all Footprints become Brains) or you can be Run Over (lose one Brain from your pool). And you can even play with both expansions at the same time for a really wild ride. Just remember to resolve the dice from the first expansion (Zombie Dice 2) before moving on to the School Bus die. 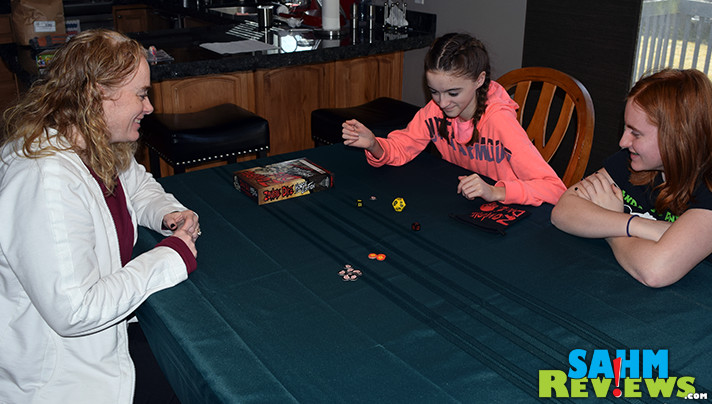 In case you haven’t heard, Steve Jackson Games has a new product in the Munchkin world that is really shaking things up. We hope to be able to bring you exclusive insight into this new game, but in the meantime make sure you are following them on Facebook and Twitter to find out all about it!

What do you think about playing a game as a zombie?