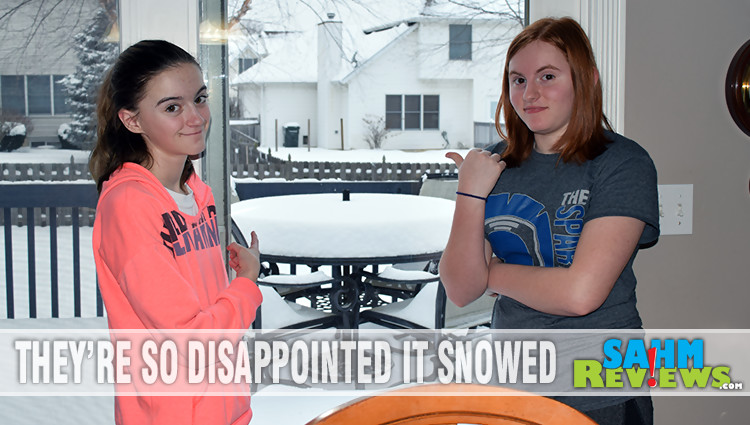 Usually you can count on Nicole writing about some types of games while I take on the others. We’ve developed our own niche based upon games we prefer. She prefers games with a lot of dice and is drawn to cooperative titles, while I love abstracts, deeper euro games and miniatures. Of course our kids love them all.

Today is a little different. As I pen this, we’ve received a blanket of snow which forced a 2-hour school delay. The snow is still coming down and another system is expected to move through tonight with another 1-3 inches. Oh, and Nicole is in another state at the annual Chicago Auto Show. To kill the time we’ve decided to give Calliope Games‘ newest title, Dicey Peaks, a run through since it is snow-themed and is better than actually going outside and shoveling the stuff. 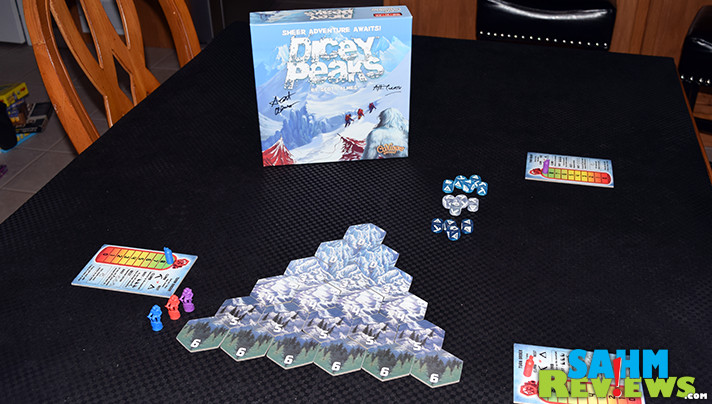 Dicey Peaks is a press-your-luck dice game about climbing to the summit of Yeti Mountain. Yes, there are Yetis – more on that in a minute. We’ve covered a number of press-your-luck dice games in the past and regularly bring out our favorites like Bears!, Ninja Dice and Hotshots. Dicey Peaks takes a different path in that it incorporates a randomly-seeded playing area and player boards that limit how far you may proceed, keeping the game close at all times.

Each person receives two player pawns, a mountain climber and an oxygen tank, of the same color along with a thick cardboard player board. The tile playing area is randomly laid out with higher-number tiles placed at the bottom of the mountain. All tiles are laid face-down and will be revealed as the game progresses. 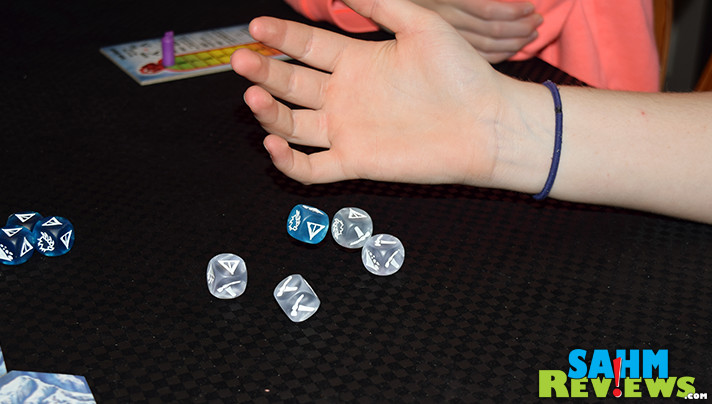 On your turn you roll five dice. But before you do so, you have a decision to make. Dicey Peaks includes three types of dice – frosted, dark blue and light blue. Each type has different results on their faces and you must choose any combination of five to roll. Once you have the roll results you must now declare whether you are trying to climb up the mountain or resting. 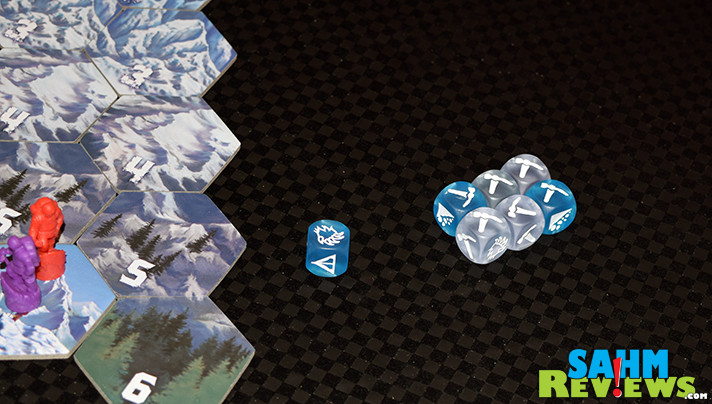 If you are climbing, you must set aside any Pickaxe or Avalance results. If you are resting, save all Tent symbols. In both cases, any Yeti icons are also saved. You may continue to roll by choosing three more dice and rolling as many times as you desire as long as you don’t bust and have three dice left. 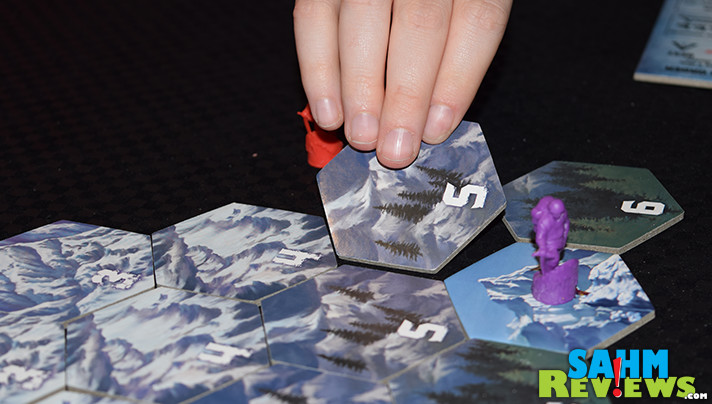 When you decide to stop rolling, resolve your collected dice as follows. If climbing, move your climber up the mountain left-to-right the matching number of spaces as you have Pickaxes. At the same time, move your oxygen tank on your player board down the same number of spaces. If you land on an unrevealed tile, flip it over and follow the instructions on its face. If you were resting, move the oxygen tank up the same number of Tents you saved, but do not move your climber at all. 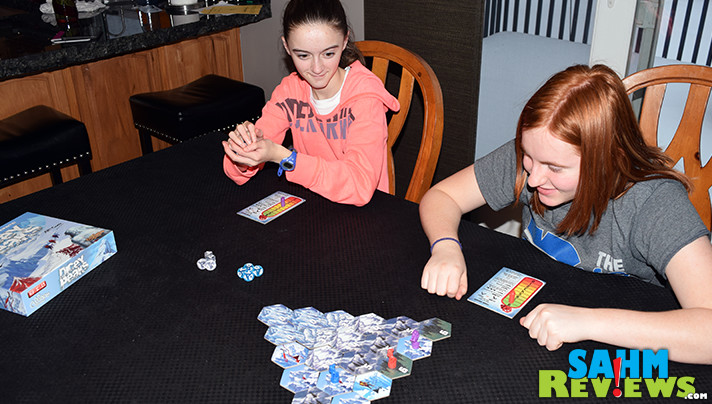 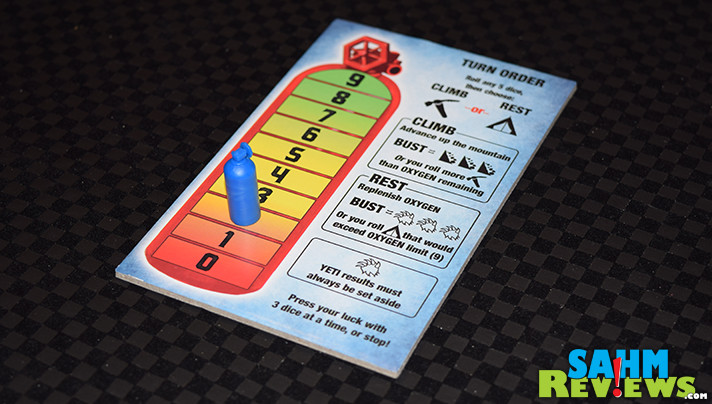 An additional restriction you’ll face is how much oxygen you can add on a turn. Each tile has a number on the back which gets lower as you move up the mountain. Just as there is less oxygen the higher you climb a real mountain, in Dicey Peaks as you climb towards the summit, resting will be less efficient. You can only recharge your tank the amount of oxygen units depicted on the tile, no matter how many Tents you roll.

Oh yeah, I mentioned Yetis. Every time anyone rolls a Yeti symbol, they must keep the die. Any other climbers that are behind you at the beginning of your turn then run ahead one tile (without resolving it) as they run away from the oncoming Yeti. They only move forward one space no matter how many Yeti you end up with. 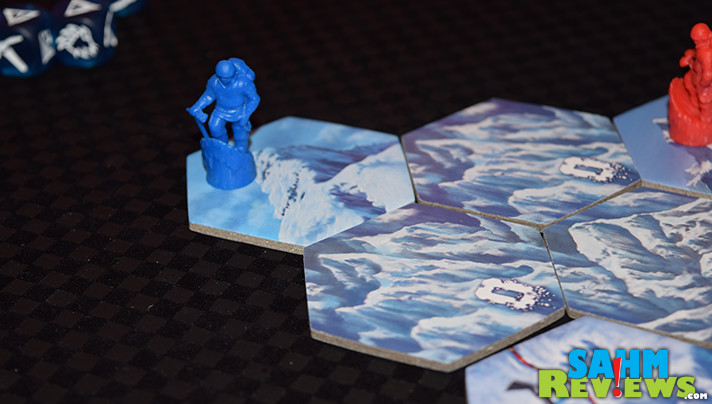 Once you complete the 3rd-to-the-top row on the mountain (3’s on the tile), on your next move you may choose any of the three “0” tiles on the top two levels. One of these three tiles (at random) have the final flag, and if you choose the correct tile, you immediately win Dicey Peaks. If you select incorrectly,  you will need to wait for your next turn to roll and move (hopefully) one space to select another one. Because these tiles have a zero on them, you cannot rest and regain oxygen – so hopefully you have enough in your tank to find the flag. If not, you immediately lose and the rest of the players continue on! 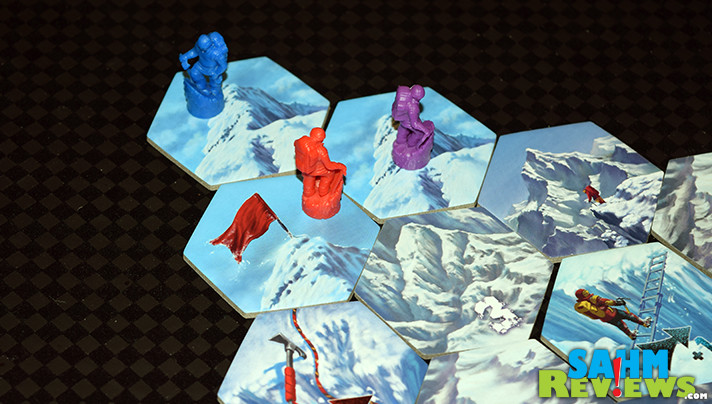 A nice light family-friendly game, perfect for a snow day or a hot summer afternoon when you’re looking to escape to something cooler. Dicey Peaks came to life thanks to a successful Kickstarter campaign and is now available for general purchase on Amazon for just a little over $20! Calliope Games also just released their second wave of games in the Titan Series which you can find out all about on their website, and they are very active on social media where you can find out what they’re up to next (Facebook, Twitter)!

What is your favorite thing to do on a snow day?