It is a cold and snowy (blizzard-y) day at home with all the kids. When I was growing up, I loved snow days as I got to play outside in the snow and then drink hot cocoa to warm up while playing board games with my siblings all day. My kids would still agree with the playing in the snow and the drinking hot cocoa parts, though they would probably choose video games to board games to play with their siblings all day. As a mom, however, I try to limit electronic time so when I find a fun new game that we can play together without staring at screens, I get really excited! 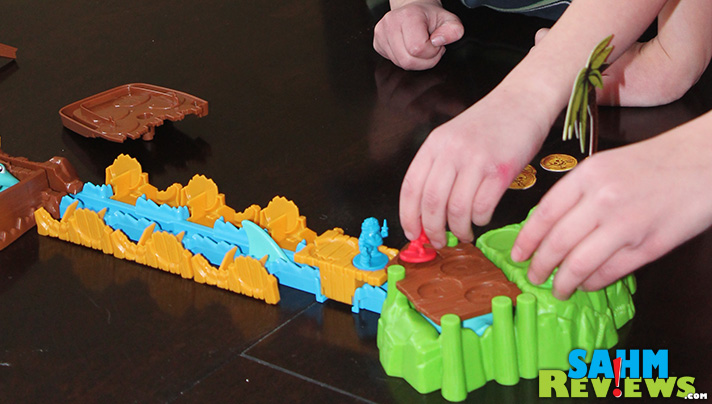 We were just introduced to a new interactive board game – Shark Mania. This game is a riot to play but just as fun, in my opinion, to watch. The game’s premise is to move about 24 spaces from one end of the board to another….rolling a dice and moving that many spaces. Sound basic and fairly uneventful?? Maybe…until you add in that you are being chased by a shark, AND the board is torn apart by the shark as it chases you, AND you are trying to collect gold pieces at the expense of moving forward away from the shark AND all of this happens in about a minute and a half! After which, you can reset the game and play again! 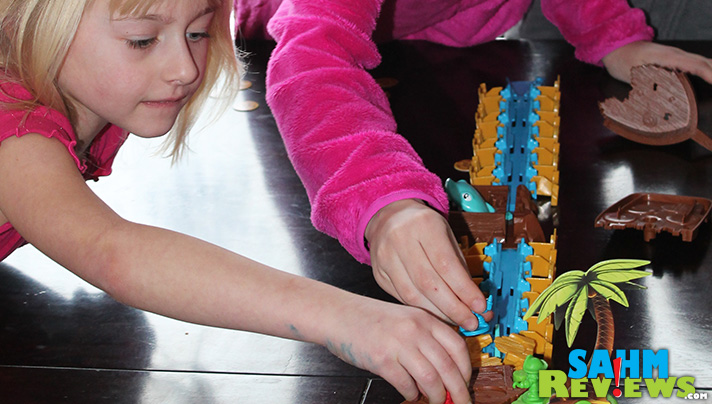 Once the game is set up (very easy to do), someone pushes the treasure chest which starts the game and starts the shark moving forward. The players then take turns rolling the dice and can choose to move forward (escaping the shark) or choose gold pieces (which are tallied at the end to win the game). It is a game of strategy and excitement. The first time I played, my heart was beating so fast – it was hilarious, like I was really being chased by a shark. 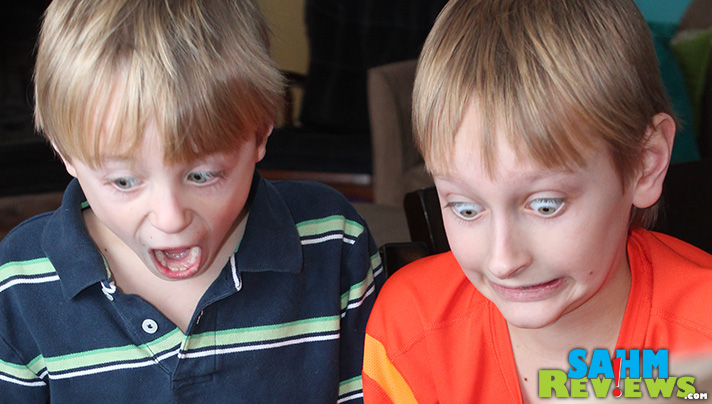 The kids thought it was both thrilling and suspenseful. (It really is fun to watch their facial expressions as they play the game). They liked the falling pieces and the popping sharks which added a level of excitement. They also liked the time frame involved as it is a quick turn around so you can play many rounds in a short time period.

Their only concern was in the time involved in turn taking. As it is so fast paced, each second counts. Each player must get the dice, roll the dice, move, and then pass the dice in a timely manner. If the player who is in the lead takes a longer time to do these steps, the player who is farthest back may not have a turn to roll and move before the shark catches up to them (an automatic loss). This is addressed in the rules – and is just a matter of fair play.

By adjusting the shark’s timer, you can tailor the level of play to suit the ages and skill levels. When my littles were playing, we allowed the full time (100 seconds). However, when my older kids were playing they could set the timer at a significantly lower amount….making the game harder. It is a fast paced game suitable for many ages and full of excitement for all.

If you’re looking for a unique game that will get the kids swimming with excitement, this is definitely worth checking out. You can pick up a copy from Amazon. Afraid of the sharks? Maybe Mustache Smash, also by Spin Master Games, might put a smile on your kids’ faces.

23 thoughts on “Be Quick or Get Eaten By Sharks”