If you’re like us and play board games regularly, you know that there is a big difference between games that last 20 minutes and those that take a couple hours to complete. We enjoy both and do what most others do – play a couple short games, then a long one, and then wrap up the evening with another short game or two. Think of the short games as the appetizer or dessert, with the meatier game that plays longer the main course.

The typical term for these shorter games are “filler games”. It’s an accurate description and fills the time gap between longer games or when you’re waiting for friends to finish up another game so you all can play one together. They “fill” the time instead of waiting with nothing to do. We have our favorites that ride along in our game bag, and others that rotate in and out. One example is Why First? by AEG, a game that we covered nearly three years ago. It is still a hit with our family and game night friends, and because it is quick to teach and play, regularly draws new players to the table when we pull it out.

We recently acquired a new game, Sakura by Osprey Games, that may finally supplant Why First as our go-to filler choice. Not only does it offer more player interaction, it was designed by one of our favorite game designers, Reiner Knizia (Modern Art, Lost Cities, Too Many Cooks, etc.)! And of course it is dressed in one of the hottest themes of the day – ancient Asia! 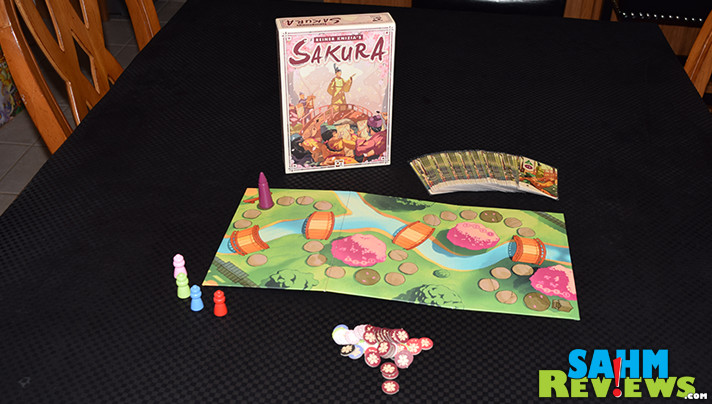 We were pleased to discover that Sakura supports up to six players with only a minor adjustment to the rules. Most games we find only play four, but many times we need to accommodate more. Inside the box you’ll find a foldable game board, six player pawns, an Emperor pawn and a few dozen tokens. Setup is very quick – lay out the board, place all player pawns on the bottom left edge of the board (next to the archway), create a pool of tokens, shuffle the deck of 60 cards and deal out five of them to each player!

Each player is a painter trying to capture the perfect likeness and setting of the ruling Emperor. Each Spring the Emperor takes a walk through his kingdom to enjoy the blooming cherry blossoms. You and the other painters are following him along the path, being careful not to disturb him, yet vying to be as close as possible in order to have the best position for your painting and ultimately gaining the Emperor’s favor. 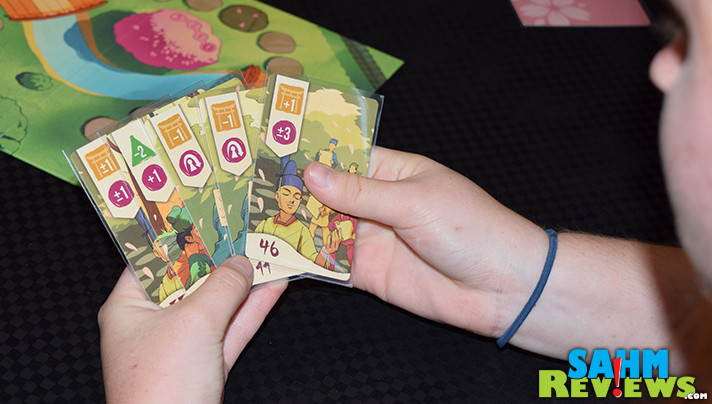 The cards in your hand have a couple things on them to pay attention to. First is the number in the lower left corner. These range from one through sixty (one for each card) and will determine the order in which the cards are resolved. In the top left you will find two symbols, also with numbers inside of them. The top symbol is the “Garden Action” which will allow you to move the Emperor along the track or one of the painters that is closest or furthest away from the Emperor. This action is resolved first before moving on to the second symbol. 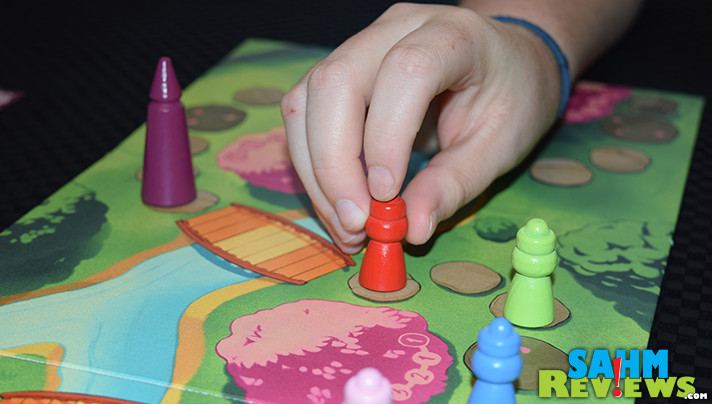 The lower symbol represents the “Painter Action”, meaning you’ll move your own pawn along the pathway depending upon what the card depicts. You might move him forward 1, 2 or 3 spaces or the same number backwards! Other cards require you to hop over the next pawn in front of you or even count up the number of painters ahead of you on the track and move forward that many spaces. Each time you move you only count open spaces on the board and can never land on an occupied space. That means that while the Emperor may be four physical spaces in front of you, if there is another painter between you and him, there are only three spaces separating you two. 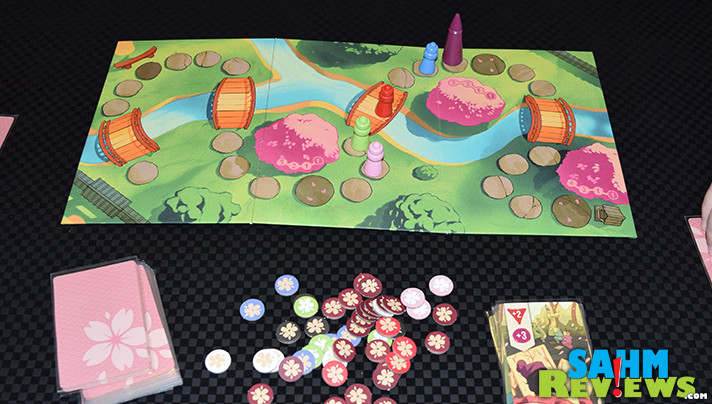 Did I mention that you do NOT want to bump into the Emperor by catching up to him on the board? If you do, you will move back three spaces and lose one of your collected tokens. This also happens when someone moves the Emperor backwards and causes them to run into someone. Tokens are gained whenever the Emperor reaches one of the three Sakura spaces, where he stops to admire the blossoms. The painter closest to the Emperor receives three tokens, the next receives two and the third player receives one. If playing with more than four painters, the fourth place position also receives one. 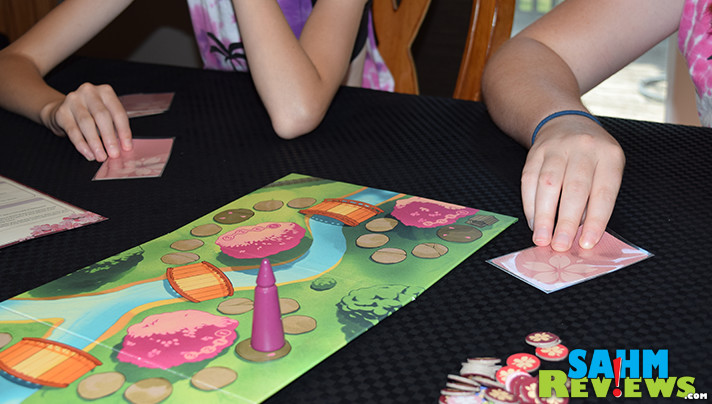 Each round all painters choose one card from their hand and reveals them simultaneously. The cards are resolved in order based upon the previously-mentioned number in the lower left corner. Once all players have taken both actions on their card, they draw a new card from the deck and begin a new round in the same manner. Once the Emperor reaches the final Sakura space at the end of the board, tokens are awarded one last time and the player with the most tokens wins Sakura! If there is a tie, the player who ended the game closest to the Emperor is the overall winner! 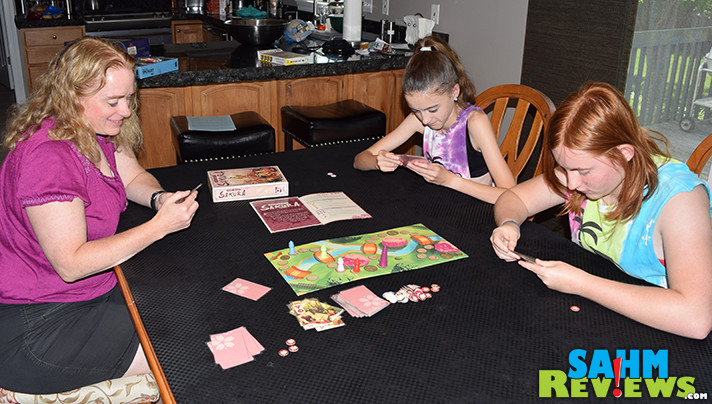 Because every turn is impacted by what others play, and you never know what order they’ll be resolved in, Sakura has a ton of player interaction as your card helps (or hurts) the other painters. A tactical game requiring you to predict when to play the right card and saving your big movements for when you’re far behind or simply at the end of a scoring phase. No matter your plan, expect it to be interrupted by others.

Ringing up at around $25 on Amazon (and even lower on Osprey Games’ website!), if you enjoy “gotcha” games, you’ll love Sakura. You may notice we sleeved the cards in our copy of the game. Considering how many times Why First made it to the table in the past three years, we’re planning ahead by keeping the cards pristine. Want to try Sakura for yourself? Enter below to win a copy direct from Osprey Games and don’t forget to come back each day for additional entry opportunities!

31 thoughts on “Sakura Board Game Overview”