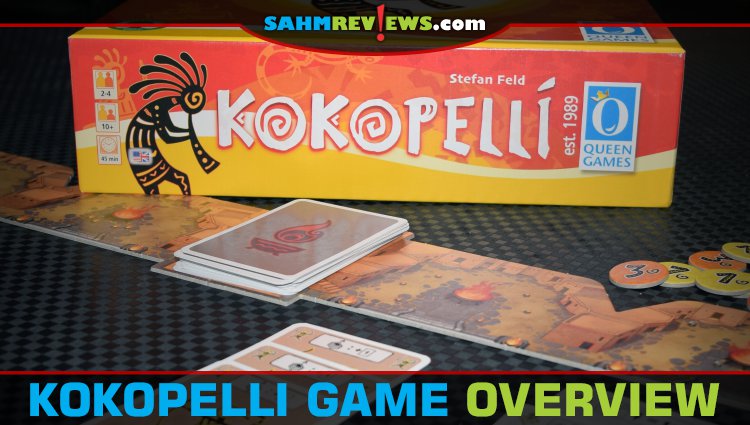 We’ve talked more than once about game designer, Stefan Feld. With quality games such as Aquasphere, Forum Trajorum, In the Year of the Dragon and Luna, he’s one of Scott’s favorite designers. In fact, there’s a shelf in the living room that stores games he designed. It’s not like it’s a cabinet for games either. It’s the same shelving unit that displays keepsakes from our wedding, family heirlooms, our yearbooks, some collectables and a Family of the Year award we received from the local Y. Every once in a while we’ll find a design that is very unlike his others, but when we saw Kokopelli at the Queen Games booth at Origins Game Fair, none of us thought it was one of his games. Look at it. Does YOU think it looks like a Feld game?

The idea behind Kokopelli is that there are villages holding various ceremonies. Setup is generally the same regardless of whether playing 2, 3 or 4 players. There are a few differences, but they’re pretty minor. Shuffle the selection tiles face down then randomly select 10. Return the remaining to the box. Place them in a row in the center of the table with a “3” and “4” victory point tokens stacked on top of each. Create a general pool with the remaining victory point tokens. Each player selects a village and takes the associated board and cards. Return cards to the box for any of the selection tiles not being used this game. Each deck, consisting of 3 cards for each ceremony type along with six Kokopelli cards, gets shuffled and placed on the center spot on each player’s village board.

Each player represents a village consisting of four spaces. Those are the areas where they can initiate their own ceremonies and take advantage of ongoing bonuses. (More on that in a minute.) In addition, the two ceremony pits in the neighboring villages on either side are also valid, but restricted, areas to play cards.

Beginning with the first player and proceeding clockwise, each active player performs any two actions once or one action twice: Draw a card, exchange cards, open a ceremony, play a card or cancel a ceremony. Drawing cards is self explanatory: you draw a card. There are a few things worth noting regarding this action. First, there is a hand limit of five. After you complete all your actions for the turn, you’ll return cards in excess of five to the bottom of the draw pile. Second, drawing the last card from your deck triggers the end of the game so be mindful of that. Third, as a different action, you always have the opportunity to exchange them if you aren’t getting what you want or need. Simply count the number of cards in your hand, return the entire hand to the bottom of the draw deck then redraw that same number back into your hand.

The meat of the game revolves around playing the cards. Every card has an ability printed on it and it remains active to the village where it’s opened. As soon as a ceremony is closed, that ability is no longer available. When playing cards, you have a couple of options. You can open a ceremony in your own village or play cards onto an existing ceremony anywhere in your play area. The final action option is to cancel a ceremony which involves simply removing one of the stacks and placing those cards into the discard pile.

The goal is to have earned the most victory points at the end of the game, but we haven’t talked about how that happens. There are an assortment of ways to earn points. Some of the card abilities award points for doing things like playing in someone else’ village or when someone else plays a Kokopelli (wild) card onto one of your ceremonies. However, the bulk of the points come from closing ceremonies out. This happens when the active player adds the fourth (or sometimes third) card to a ceremony. That stack is removed and the active player is awarded the topmost victory point token on the corresponding selection tile in the center of the table.

The end of a game of Kokopelli triggers when either a player exhausts their draw pile or the last Game End tile is placed onto one of the selection tiles. Play proceeds until it reaches the starting player again at which time points are tallied to determine the winner. There is a lot of interaction with other players and your strategy may quickly change if someone closes a ceremony that provided benefits for you. With some instructions, younger players could easily learn to play making it great for family game night. Pick up a copy at your local game store or on Amazon. Visit Queen Games’ website and social channels (Facebook, Twitter) to learn more about their other titles too. And if it’s the first Feld in your collection, welcome to the club.

Are you familiar with the story behind Kokopelli?