In case you hadn’t figured it out when we’ve mentioned it previously, we really like games designed by Stefan Feld. We’ve only mentioned it like 3.2 bajillion times. Okay, that may be a bit of an exaggeration, but we have mentioned it a lot. I don’t get tongue-tied when talking to game designers (I’m married to one so I totally get that they’re just normal people), but I was a bit star-struck at Gen Con 2019 when we were able to meet Stefan Feld in person! We’re always happy to incorporate his games into our game night and feature them here when possible. Today that game is Forum Trajanum from Stronghold Games.

In Forum Trajanum, players are working on constructing their own cities while simultaneously sending envoys to Rome to contribute to the Emperor’s efforts to build a massive monument. One of the reason that this type of strategy game appeals to me is because it’s like a giant puzzle, balancing the different responsibilities and requirements. There’s a main board in the middle where you’re trying to have majority control or complete colored sections for bonuses. In addition, each player has their own board where the construction takes place! Place the game board in the center of the table and give each player their own individual boards. Shuffle the street cards and form three piles with eight cards each in their designated spots. Lay out mosaic boards in the center Forum square as determined by the number of players. Sort the building tiles by color, placing half of each color and size facing up on their designated spots and the others facing down on their corresponding spaces. Create a general supply of coins, markers and the various meeples. Randomly select one Trajan objective card for each cycle and lay them face up next to the corresponding street card piles. Victory point and forum markers as well as column fragments are placed in their starting locations. 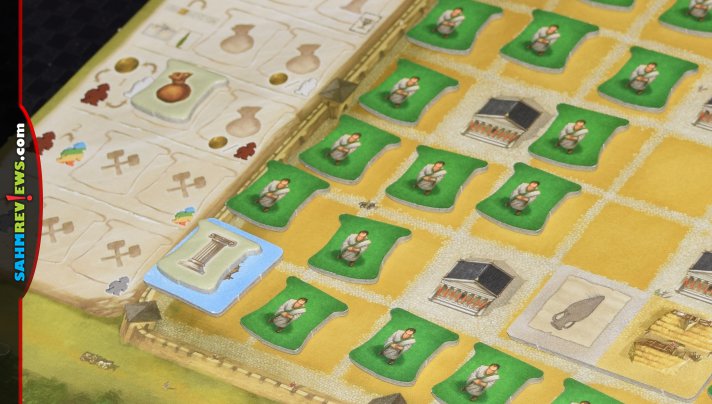 Set up each player by adding the slide bar to the top left to indicate the prestige level and points you’ll earn for various accomplishments. Then populate the player boards by randomly placing Colonia tiles face-down in the empty spaces around the temples with corner spaces reserved for crane tiles. Players being the game with starting resources (Tribune, builder, assistant and coin and one at random). 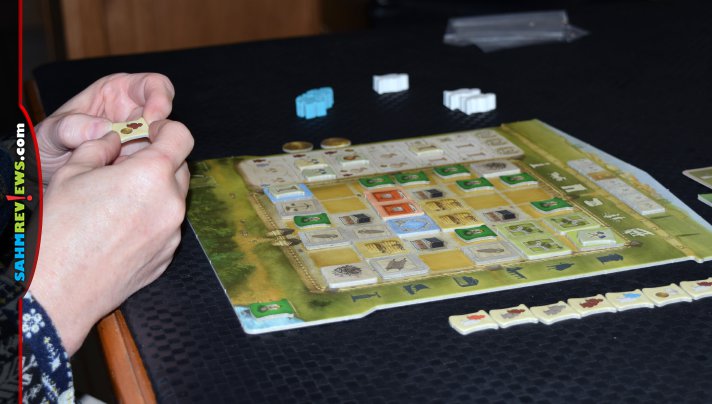 Forum Trajanum takes place over three cycles with each consisting of four rounds. To begin the round, you’ll reveal two street cards which will determine which streets you’ll be able to build on. All players simultaneously select one Colonia tile from each of the two streets as determined by the symbol on the cards. Each player secretly selects one of the tiles to keep and one to pass face-down to the player on the right. 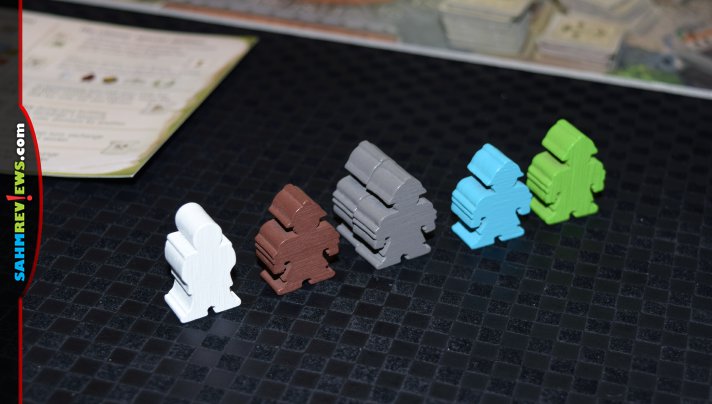 Beginning with the starting player for the turn, players select which of the two Colonia tiles to use. The front of the tiles depict resources or workers. If you utilize the tile with the resource, you collect it from the supply immediately. A builder allows you to construct a gray building while workers relate to colored structures. An assistant coupled with any other meeple turns it into the color of your choice. Tribunes can either allow you to ignore the street restriction or be turned in to utilize both of the Colonia tiles! Some Colonia tiles depict emblems of the three different social classes (partisan, merchant and craftsman). If you choose to retain that Colonia tile instead of a resource/worker then you’ll earn bonuses, special abilities or multipliers depending on the row where it’s placed. When selecting your own tiles, they’ll be placed face down on the ship space of your board. These envoys will later be used in the Forum square which I’ll explain shortly. 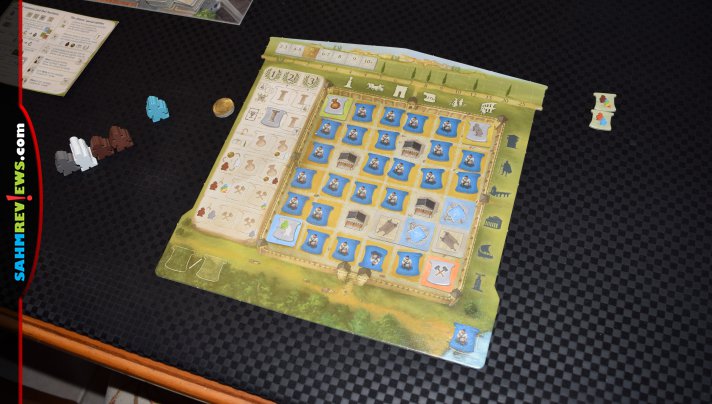 Depending on the spaces you’ve cleared during the Colonia tile selection process. Return (to the supply) the appropriate workers to construct one single or double space building within your city. As soon as you’ve built it, you earn the associated building benefit which ranges from obtaining resources or people to upgrading your prestige track. 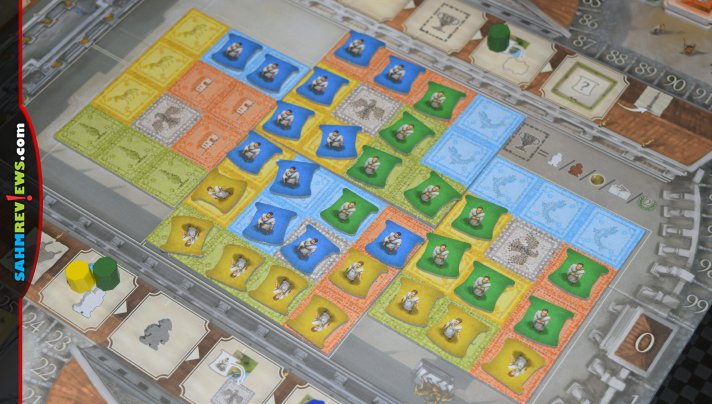 Colored structures allow you to place one of your envoys in the associated color space on a mosaic space in the Forum square. You’ll earn points based on the sizes of your envoys in the Forum square with additional victory points awarded if it connects with one of the eagle icons. In addition, bonuses are awarded to the player who placed the last piece to finish one of the color sections. 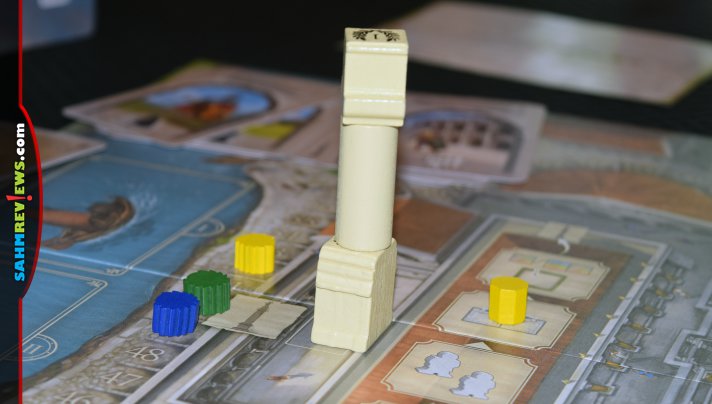 This process continues clockwise until each player has completed their turn. Then the first player passes to the player on the right and the next round begins. After all the street cards in one pile have been depleted, the cycle ends and the scoring phase begins. You’ll earn points for accomplishments within your Colonia as well as on the main board. Once completed, place the next fragment on Trajan’s Column, pass the starting player figure to the person on the right and the next cycle begins. The player with the most points after three cycles (12 rounds) is the winner.

With multiple different ways to set up your own city and various paths to earn points, Forum Trajanum is a game that can be played several times without feeling repetitive. Copies are available on Amazon with Prime shipping so you still have time to order and get it in time to play during the holidays! Visit Stronghold Games on Facebook and Twitter to see news and updates about their other games! If you enjoy learning about the location (or miss traveling), check out our list of games about Rome!

Do you have a favorite designer or game theme?