A year ago around this time, we had a friend craft a story about his recent travels and shared places and games relating to Florence, Italy. I love the idea of traveling using board games which was the catalyst for sharing our list of Japanese-themed games. As we rolled into 2020, Scott shared our top ten best-selling games of 2019 and something became very clear: most of these games appeared in lists like Best Marvel-Themed Games, More Marvel-Themed Games (can’t have too many, right?) Christmas-Themed Games, Celebrate St. Patrick’s Day with Irish-Themed Games and Games That Support 7 Players.

In these types of articles, we give you a variety of offerings then link back to the ones we have written in more detail. It certainly makes the decisions on what to purchase easier when you can see a whole bunch of similar themed options in one place. Since these help you decipher which games to add to your collection, you may see more of these lists showing up including games rooted in pop culture, holiday-themed games or ones based on a  destination. Today, we’re taking you to a part of the world that is not only rich in history, but has been a theme of more than a few board games. Check out this list of highly-rated games that are set in Rome. 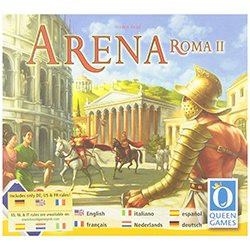 The revolt in Rome will not end for a long time to come. Join the action and find out who is the most powerful ruler by skillfully playing your cards. No matter if you strengthen your own position with strong cards like Arena or Ballista or if you augment your victory points with Templarius and Triremis – you will be the winner if you use your characters and buildings with wits.

Ave Roma is a strategy board game with a unique and exciting worker ranking-drafting mechanic. During the game, you are competing for wealth in Ancient Rome. Make your strategy work through careful planning of your actions, even a few rounds ahead. Each round consists of three phases. First, you send your workers to various action locations, to collect supplies and gain influence through their labour. In the second phase, you collect new workers, which will also determine the player order for the next round in the third phase. The winner is the player with the most points at the end of the game 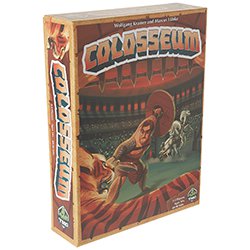 In Colosseum each player is a Roman impresario – producing great spectacles in his or her arena in the hopes of attracting the most spectators. Players earn wealth and glory for each event run, using it to create ever more ambitious events. They will need to improve their arena, find the best performers, lure the Emperor and his nobles, and manage assets for long-term success to be granted the title of Grand Impresario, with tales of your extraordinary spectacles acclaimed throughout the empire. 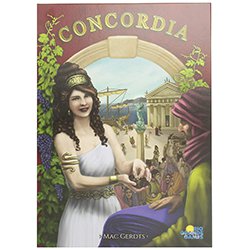 2,000 years ago, the Roman Empire ruled the lands around the Mediterranean Sea. With peace at the borders, harmony inside the provinces, uniform law and a common currency, the economy thrived and gave rise to mighty Roman dynasties as they expanded throughout the numerous cities. Guide one of these dynasties and send colonists to the remote realms of the Empire; develop your trade network; and appease the ancient gods for their favor – all to gain the chance to emerge victorious! CONCORDIA is a peaceful strategy game of economic development in Roman times for 2 to 5 players age 13 and up. 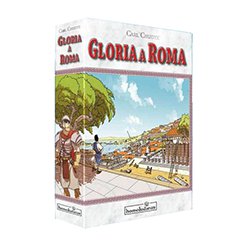 In 64 A.D. a great fire originating from the slums of Rome quickly spreads to destroy much of the city including the imperial palace. Upon hearing news of the fire Emperor Nero Caesar races back to Rome from his private estate in Antium and sets up shelters for the displaced population. Reporting directly to Nero you are responsible for rebuilding the structures lost in the fire and restoring Glory to Rome. Glory to Rome is a card-based city building and resource management game with a novel mechanism. 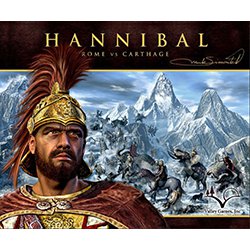 Hannibal: Rome vs. Carthage is an asymmetrical card driven game for 2 players set in times of epic struggle between ancient Rome and Carthage. It presents a conflict between two super-powers of Antiquity from classical Clausewitzian perspective, according to which a power only reverts to military operations when there is no other way to achieve the goal: political dominance. 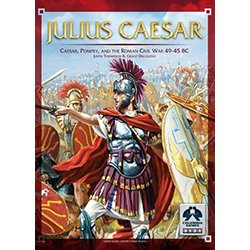 Julius Caesar brings the drama of the Roman Civil War (49-45 BC) to life. Players take control of the legions of Caesar or Pompey and fight to determine the future of Rome: republic or empire. Marc Antony, Cleopatra, Octavian, and Brutus also play key roles. 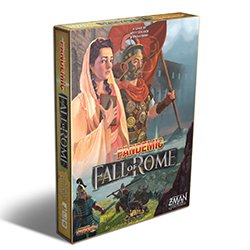 Appeared in: Pandemic: Fall of Rome Game Overview
At the height of its power, the Roman empire covered A vast amount of territory and brought major advancements in engineering, architecture, science, art, and literature. Corruption and economic crisis has made the empire unstable and paved the way for aggressive Barbarian tribes to attack. Now citizens, soldiers, and allies of Rome must unite to protect the empire in Pandemic: fall of Rome! Raise armies, defend your cities, and forge alliances to ward off the relentless incursions. Can you hold the line against the invading hordes and prevent the fall of Rome? 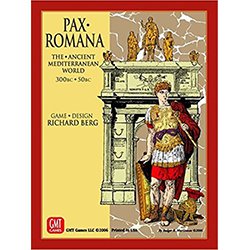 PAX ROMANA covers Europe from 300 BC through the end of the 1st century BC, when control of the Mediterranean was in a state of flux with four empires possible. The emphasis is on strategic operations, from raising armies to colonizing outlying areas, to fighting barbarian incursions, to maintaining political stability at home.

PAX uses a unique marker-oriented play sequence that provides surprise and opportunity, plus a deck of unusual cards that provide the historical background of events and calamities within which the players must operate. 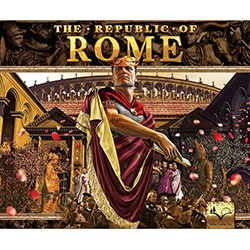 Robert Haines’ and Richard Berthold’s classic game of political intrigue and diplomacy is back in full form. Republic of Rome is a distillation of 250 years of Roman history, from about 265 B.C., all in one evening. In Republic of Rome, players are in a constant balancing act between personal advancement and the welfare of the State. Players build the Empire from scratch and thus develop and change the political environment in which they are competing. Players’ senators vie for political power, military commands and economic advantages against the backdrop of a turbulent world. Deals and counter offers abound. 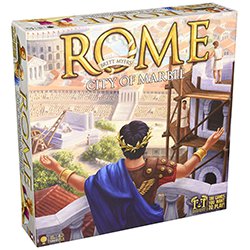 Appeared in: Rome: City of Marble Game Overview
Welcome to ancient Rome! In this tile-laying game, you are a builder backed by one of the powerful Patrician families of Rome. Influence and direct new construction of the expanding metropolis through shrewd development of the city’s districts. Construct various civic buildings: Temples for worship, Baths for health, Theaters and Arenas for arts and entertainment. The more you build, the more you gain Imperium, the measure of real power and influence in Roman society. As buildings are constructed, influential players score victory points representing their prestige.

Whether you plan to use a Roman-themed games as a way to learn about the history and culture of Rome or simply as entertainment, we’re sure you’ll find something that fits your preference. If you have questions about any of these that we haven’t covered in-depth, please ask. And by all means, if you have a request for a similar list that would help with your game purchase decisions, please leave a comment.

What is your favorite Roman-themed game?

7 thoughts on “11 Highest-Rated Board Games Set in Rome”