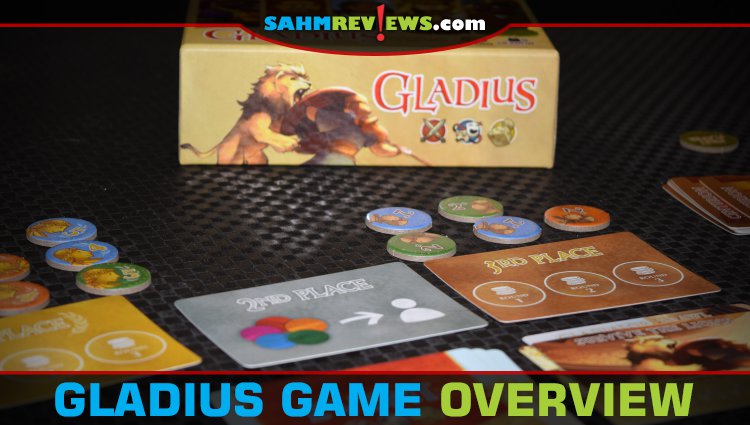 When I think about board games about Rome, the first thing that comes to mind is conflict. Likewise, when I hear reference to gladiators, I envision battles to the death. When it came time to learn to play Gladius from Deep Water Games, I was pleasantly surprised to find the focus of the game to be about betting, bribery and cheating. Seems weird to say “pleasantly surprised” followed by some illicit activities, doesn’t it? But that’s what Gladius is all about! While there are gladiators competing, the game focuses around how the spectators are influencing the competition.

Gladius plays 2-5 people, but there’s a different setup when there are only two. Since there are three of us available to play at this moment, I’ll set it up accordingly. If you’re curious how a 2-player game looks, check out our How To Play Gladius Reel on Facebook or Instagram. Start by shuffling (separately) both the event and gladiator cards to form their respective decks. Podium cards form a row above those and betting cards below. Leave plenty of room below the betting cards to reveal gladiators and place influence cards. Randomly deal out a spectator card to each player then they take the respective influencer deck and tokens. Based on the player count, draw cards to create a starting hand.

Over the course of three rounds of five phases each, spectators will scheme in order to get the competition results to align with how they bet. Each round plays out the same by revealing the top card from the event deck then introducing the gladiator teams as instructed. Gladiators skills fall into three categories: skill, theatrics and luck. The event card indicates which will be judged during each particular round.

Players take turns placing bet tokens face down on any available slot for any of the gladiator teams. Bets are either for the team (gold) or against (bronze) indicating whether you think the team will come in first or third.

So here’s where things start to get messy because, you know, cheating to ensure a team wins or loses. Starting with the first player, everyone places influence cards to affect the outcome. These actions vary in many ways and can include things like adding more gladiators to a team or neutralizing someone’s skills. Each card indicates whether it should be played face up for everyone to see or face down.

There’s also an option to discard influence cards in order to utilize the spectator’s special ability. The final action option is to place a second bet. The action phase ends when the last player has done this with that person claiming the first player token for the following round. It’s important to recognize that only two additional influence cards are drawn into each hand during round cleanup so use those cards wisely!

Once all players have placed a second bet, all the influence cards are revealed and the winning gladiator team is determined. Second place doesn’t matter, but the third place certainly does! Without showing their values, move all the betting tokens to the respective slot on the podium cards. Repeat the entire battle, betting and influence sequence for three rounds. After the third, the betting tokens are revealed. Any bronze tokens on the first place podium are removed and do not score. Then flip the tokens on the third place podium. Each bronze bet scores two points plus one additional if an opponent bet that team would be the winner. The player with the most total points from all their bets is the most influential spectator!

Gladius is a unique take on a betting game while also offering a new way to look at games involving battles. While it’s marked for ages 14+, younger players could participate if the rules are explained. Copies of Gladius are available on Amazon and direct from Deep Water Games, but we encourage you to support your local game store and ask about availability there. Join the crowd of spectators on Facebook and Twitter to see what else Deep Water Games is working on.

Have you ever wanted to visit Rome?