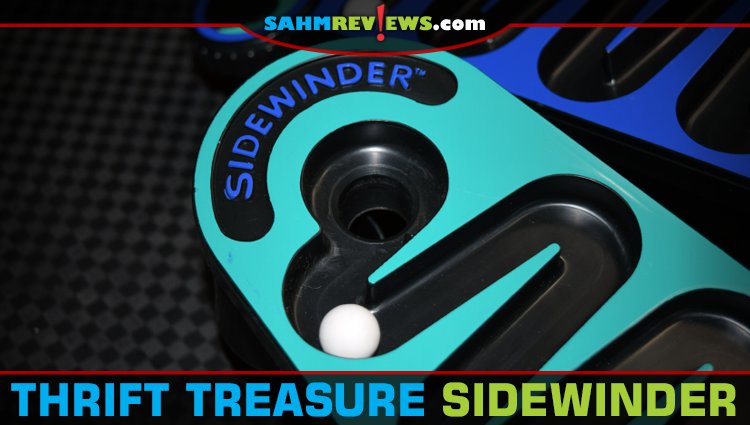 I don’t care what anyone says. Many of the best dexterity games came out in the late 80’s and early 90’s. Some of our favorites have been Hurry Up, Battling Tops, and of course, Crossfire. This week we found another game from 1993 that we’ll be adding to our list of favorite vintage dexterity games, Sidewinder.

Parker Brothers published Sidewinder even though they had previously offered a game by the same name a decade earlier. This version is for two players and challenges each player to manipulate a white marble up an incline and into their opponent’s tray. The first to get rid of all their marbles wins.

It isn’t as easy to do as the description would suggest. Each tray has a winding path and the only way to move your ball upwards is to harness the inertia of tilting the tray back and forth. You may not lift the tray – it must remain on the table. Once a marble gets to the top, it will fall through a hole and into the other player’s pool.

Of course, at the same time your opponent is doing the same and dropping more marbles in your tray for you to deal with. The ramps may be set at three different inclines at the start of the game to alter the difficulty. This allows for play between people of different skill levels.

Additional rules state if a ball leaves the track, the person who owns it must chase it down. Ownership of a marble changes immediately once it drops through the hole, so it if misses the tray, the receiving player must find it! You also don’t have to try to complete one ball at a time. You can put as many as you like on the ramp. Just don’t be surprised that it “ramps up” the difficulty! As soon as one player is in possession of all twelve marbles, the game ends, and the other person, the one without any marbles, is the winner of Sidewinder!

This version of Sidewinder brings a higher-than-normal price in the collector’s market and is usually more than $30 plus shipping on eBay. If you happen across a copy at thrift or a local yard sale, if it is priced at a couple bucks, it’s worth the pickup. I usually recommend making sure all the components are present, but if only the marbles are missing, they’re an easy replacement.

Do you remember this version of Sidewinder?