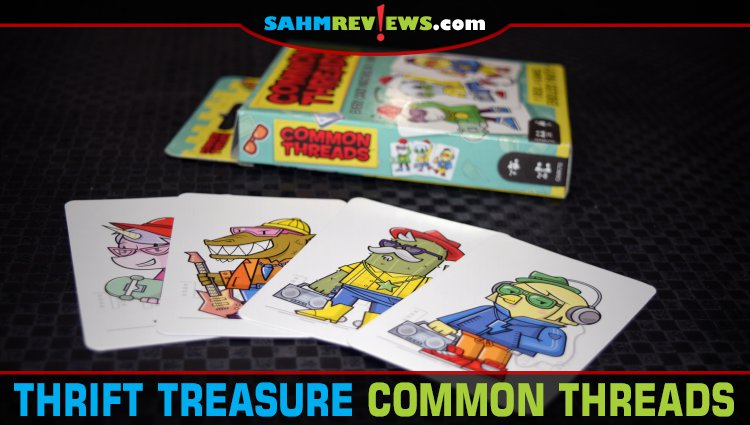 This week the 88-cent pile at our Goodwill yielded a newer card game, Common Threads. The box promised four games inside, so I figured at 22 cents per game I couldn’t go wrong. As a bonus, the artwork on each card was cute and I could always reuse them in a game prototype if I didn’t enjoy any of them!

Common Threads is a card game issued by Mattel in 2019. Inside you’ll find a deck of forty-nine character cards and four scoring cards. Each card depicts one of seven characters with seven other variable items that allow a card to match any other card in exactly one place.

For instance, two cards might show distinct types of hats, but they are of the same color. This makes a match. They might be carrying the same type of item – also a match. Of course, like characters match, as do the colors of their shirts, shoes, glasses, pendant, and pants.

As promised, four simple games are included which are all played with the same deck.

The objective of Common Threads: Quick Draw is to be the first to get rid of all the cards in your hand. Deal out one card face up to the center of the table and the rest evenly to all other players, face down. At the same time everyone will turn their stack over, making a face up deck, and rush to match one item on their topmost card to the top card in the discard pile.

When a match is found, the player calls out their match and lays the new card on top of the discard pile. Everyone is playing at the same time and the game continues until one player gets rid of all their cards and wins.

In this turn-based game, players are trying to be the first to complete a set of four matches in a common tableau. All players begin with a hand of five cards and the rest are available in a draw deck. The first player lays down any card and refills their hand to five. All subsequent players in turn order will lay down a card orthogonally adjacent to any previously laid card.

The aim is to spot and lay the fourth card in a row, column or diagonal that has four of the same matches. This can be any of the variables – character, clothing, item, etc. The first person to do so wins Row of Four.

This Common Threads game uses the score cards and requires a pen, paper, and timer. Remove all the panda cards from the deck and shuffle them together. These form a draw deck in the center of the play area. Each player is then dealt five cards face down. Start a one-minute timer and ask all players to turn over their cards and memorize what they see. Once the timer runs out, each player turns their cards over and may rearrange them however they like.

The top panda card is turned over and all players select one of their cards and find the match with the panda. Using a score card, figure out the point value for the matches made and record the scores for the round. Flip over a new panda and repeat the process until five rounds have been completed. The player with the highest score is the winner!

The secret keeper then finds the match on the two cards and declares it. If the match is clothing, the secret keeper will say only the color of the match (not the article of clothing). Otherwise, they will say “item” or “character” to identify those matches. The guessing player records on their own paper what matched and will try to figure out what card the keeper has. At any time, a player may discard the rest of their hand to draw seven new cards instead of asking for a match. The first player to correctly guess the secret keeper’s card wins!

Mattel also offers additional game rules online which uses this same deck. If you find Common Threads at thrift, that brings the cost per game down to pennies! That makes it certainly worth the investment! Otherwise, you can still find Common Threads new on Amazon for only a few dollars! Alternatively, look for Snappy Dressers, an almost identical game by the same publisher!

Do you like games that have more than one ruleset available?