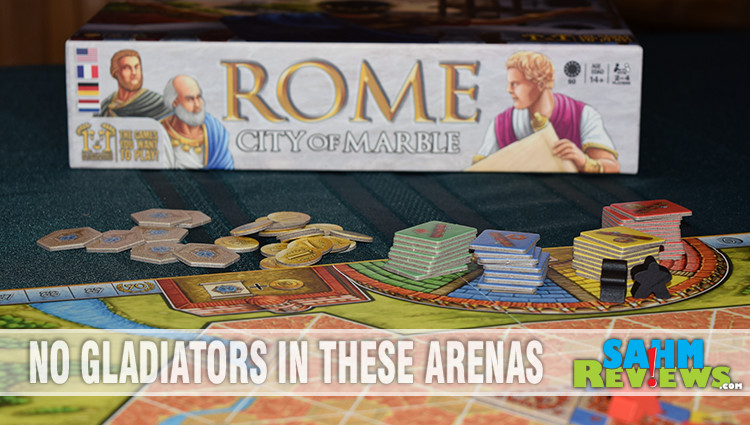 I’ve been fortunate to be able to visit quite a few places throughout my life. Trips to places like various corporate headquarters were the result of the website for the purpose of getting a behind-the-scenes look at the company. But before the kids were even born, Scott traveled quite a bit for work and I was able to take time off from my job to join him. I accompanied him to places like Vancouver, Las Vegas, San Francisco, Las Vegas, Miami, Las Vegas, New Orleans, Las Vegas, Seattle, Washington DC and more. We were scheduled to attend an event in Greece when the attack on the World Trade Centers happened and all overseas activities were understandably cancelled. it would have been my first trip overseas.

Part of his adolescent years were spent in Germany so we often have discussions about where I would want to visit on my first trip across the pond. We have traced our DNA to Europe with lineage in Scotland and Ireland so those are on the top of the list. My maternal great-grandmother, however, was born in Italy so a visit there is also on my bucket list. I watch in awe of movies that depict the great Roman landmarks and know that I’ll appreciate them even more if I learn more about them before seeing them face to face. Any guesses where I might go to learn about something new? Yup. Board games. We encourage teachers to incorporate games into their classrooms because we know from experience that it’s easier to learn about something when you’re having fun doing it. In this case, we turn to Rome: City of Marble board game from R&R Games. To be fair, it isn’t about the actual ruins or landmarks but it still teaches about some of the history of the city so it counts as prep-work in my book. 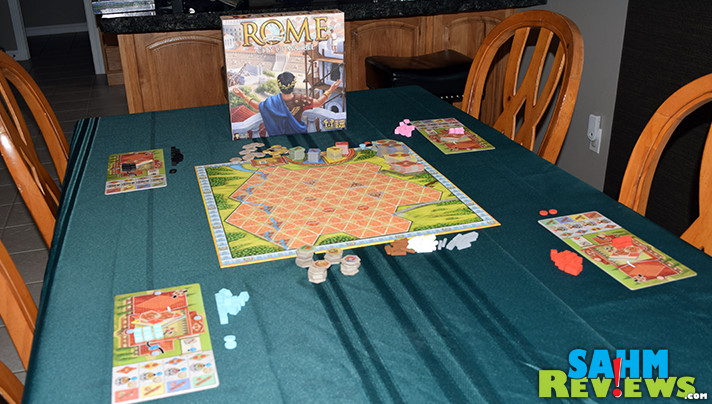 The idea behind Rome: City of Marble board game is that you’re taking on the roles of leading citizens and are working to build the city. You’ll commission the construction of buildings essential to daily life including temples, baths, theaters and arenas and ultimately establish your reputation. To begin, set the game board in the center of the table, randomly select 3 Hill tiles and 7 Bridge tiles, returning the remainder to the box. This ensures each game will play out differently. Separate Neighborhood and Imperium tiles into stacks and place on their respective spots on the board. Create supplies of coins, Fountain tiles and Aqueduct pieces next to the board. You’ll give each player their own player board and corresponding color pieces. You’re ready to get to work! 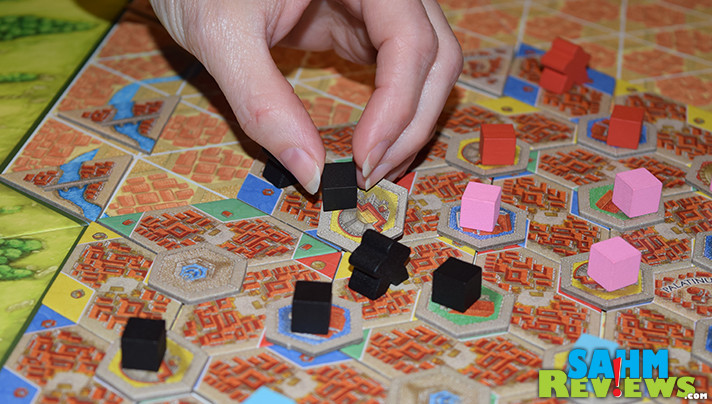 What’s interesting is how the construction occurs. It isn’t a matter of buying a building and placing it which is common in many strategy games. In Rome: City of Marble, the neighborhood needs to be built up first. You’ll take turns adding Neighborhood tiles until the groundwork is complete and a building can be constructed. Unfortunately, it isn’t THAT easy. You’ll need to assign a Magistrate to oversee the project if you plan to take credit for it and that’s only part of the process. 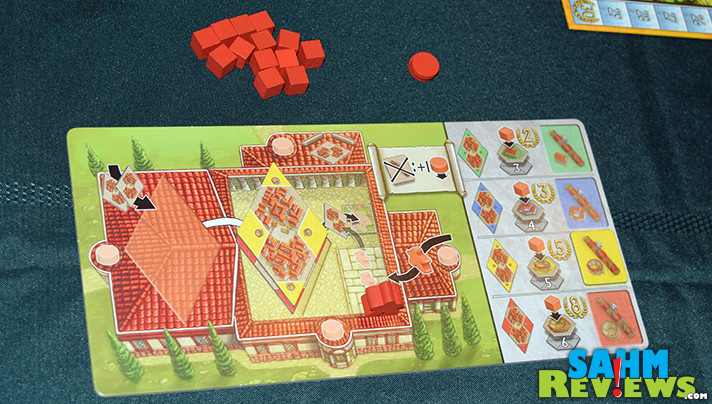 The building materials are actually four different colors of diamond-shaped Neighborhood tiles that will mix and match into the triangular grid game board. While you start with one of each color, you have to prep any additional Neighborhood tiles by placing them on the leftmost section of your player board when you “purchase” them with an action. You’ll then move them to the center of your board at the end of your turn making them ready to use in the following turn. They can only go to the main board from your center slot so it takes two turns to acquire a tile and get it onto the board. You’ll need to plan accordingly! 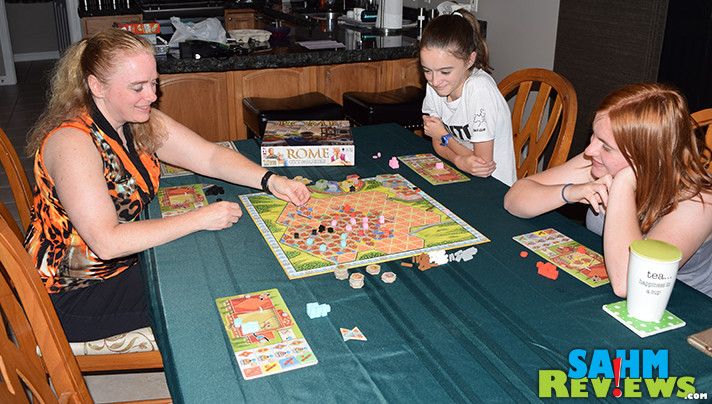 On your turn, you must take two actions which can be completed in any order. You may opt to complete an action type more than once per turn however you must completely resolve your first action (including Construction) before taking a second action. You may (1) Draw tiles, (2) expand aqueducts, (3) recall a magistrate or (4) play Neighborhood tiles. At the end of your turn, you’ll do some cleanup on your personal player board including collecting any rewards or coins and transitioning any tiles from your Neighborhood Tile “prep area” on the left to the “ready” area in the center. 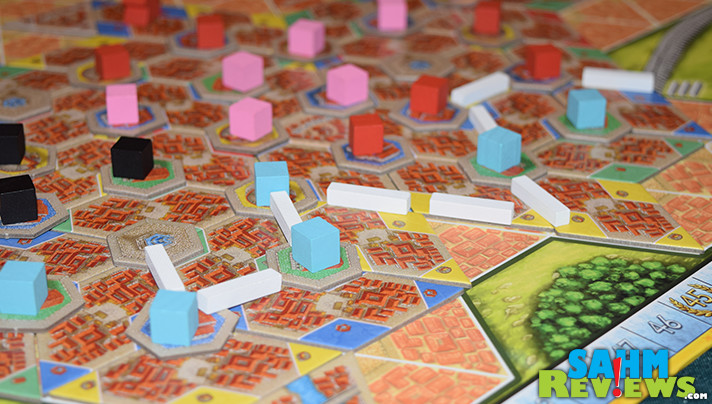 Drawing tiles means you’ll select one tile from each of two different stacks and queue it to be available on your next turn as mentioned above. Expanding aqueducts involves adding one or two pieces to the existing aqueduct in hopes of getting it to reach one of your Civic buildings. This is important because you’ll earn additional end-game victory points for any of your buildings with water! Magistrates are how you claim influence on the Neighborhood tiles you place. As a result, retrieving them from the city board and back onto your player board allows you to reassign them. Finally, the meat of the game involves placing Neighborhood tiles. So let’s talk about that in more detail.

Remember how I said that Neighborhood tiles represent the groundwork that goes into the Civic buildings? Which Civic building that is created is determined based on the number of tiles it takes to fill the hexagon. A temple, represented by green, only takes three tiles to build whereas an Arena, represented by red, takes six tiles. The amount of victory points increases along with the difficulty of the building. While every player is contributing to the construction of an area, only one person can claim it – the person with the most influence in any given neighborhood. Not just ANY influence, but the Magistrates standing on the tile matching the color of the building. Ultimately, being the player to get credit for the building means you’re the one getting the victory points as well as potentially getting additional aqueduct points. 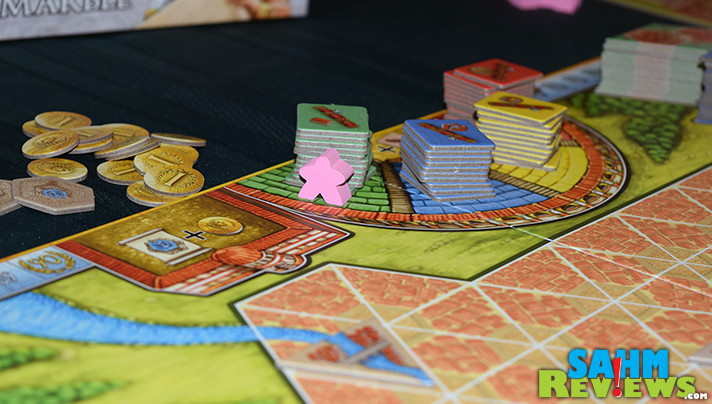 In addition, you can earn extra actions by allowing your Magistrate to collect Imperium tokens. You can also potentially claim end game victory points if you choose not to spend those actions. There are many ways to earn points and impact the layout of the board so there are multiple paths to victory beyond the things I’ve touched on here. The puzzle-ish layout is great for someone who sees patterns emerging and is able to capitalize on them. The box shows 2-4 players ages 14 and up, but there isn’t any reason someone younger couldn’t play it. At the heart of the game is simply the completion of hexagons. Kids are doing tangrams in early elementary school and I know from experiencing escape room games with the girls that these skills help them see patterns very easily! It may sound like a lot going on but if you break it down into pieces then it isn’t so overwhelming. Regardless of whether you are planning a trip to Rome or not, this game is a good addition to your collection. You can pick up a copy of Rome: City of Marble direct from R&R Games or on Amazon for a few bucks more.

What location is on your bucket list to visit?