My surname is Brady, a documented lineage from Ireland (MacBrady). My wife’s is Robertson, which comes to her through a number of Northern European countries such as Norway, Great Britain and of course, Scotland. We have always enjoyed taking our girls to various festivals that celebrate our heritage, whether the Iowa Irish Fest held in Waterloo, Iowa every year, or our local Celtic Festival and Highland Games which not only has vendors, food and beer, but actual competitions in the style of the old Celtic games. If you’ve never seen a live caber toss (log throw for us ‘mericans), then you’re missing out. 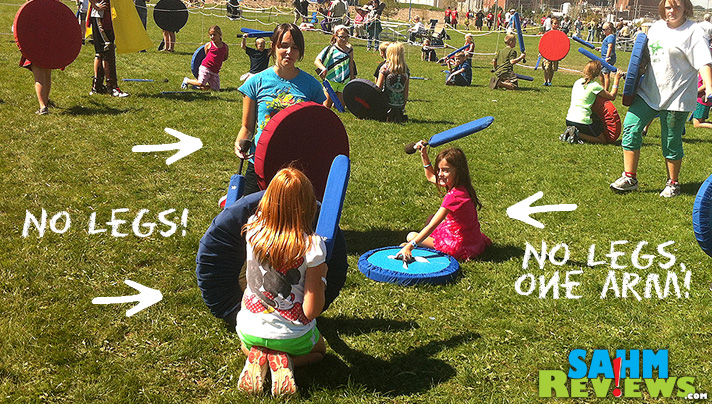 There are also great events for the kids, including one of their favorites, an actual sword-and-shield battle-royale! Using foam padded weapons, kids of all ages battle to the ‘death’ by chopping off limbs until their opponent is vulnerable for a “death-blow”. Get hit in one leg and you have to hop around. Both legs and you’re immobile. Lose an arm and now choose between your shield or your sword. Of course the game is played on the honor system, but cheaters quickly learn what it is like to be rushed by an entire medieval army! And you thought video games were violent!

Among the great food booths are clan displays with people on staff to tell you about the surname’s heritage, including the regions they were known to inhabit and any royalty known to come from that clan. Our local festival is very heavy on the Scottish side, so we tend to focus on my wife’s family (Robertson) and introduce our local family to their heritage as well (photo above is our niece).

But if I have one complaint about the event, it has to be about the souvenir vendors. On more than one occasion I found a trinket I would have liked to purchase as a keepsake, only to turn it over and see those dreaded three words, “Made in China”. Why in the world would I want to buy a Scottish souvenir that was made in a country on the other side of the globe? I ended up leaving without making a purchase, vowing to find something online.

In a moment of serendipity, I was introduced to an online retailer that was not only based in Scotland, they also only offered authentic Scotland-made products. Not just trinkets and souvenirs, but everyday clothing and full-on kilt outfits! I spent hours pouring over the offerings from Heritage of Scotland before finally making a purchase of some things that I knew I couldn’t find here in the U.S.

I probably went a little overboard, but since I was shipping it in from another country I wanted to make sure I only had one order to keep the shipping costs reasonable. Take a look at some of the amazing things I ordered:

First I chose something simple, in this case a Robertson bookmark and book. The book recounts the stirring history of our clan from its beginnings in the mists of medieval Caledonian history down to the present time. The bookmark? Well duh, it saves our place in the book!

We also opted for a Tea Towel that we’ll give as a gift. Made from 100% cotton, it not only has the clan name on it, it also has the crest and a wee bit of history.

But what we were most excited about was the tartan-specific scarves and Scottish throw. Heritage of Scotland has a vast library of tartans for every surname, some modern, some ancient. In our case, the red scarf is called “Robertson Red Modern” while the green one mimics the “Robertson Hunting” tartan.

The throw is an amazing product, made of 100% lambswool and is also available in specific tartans. I’m looking forward to letting it keep me warm this winter as I dream of lovely lassies in kilts! I can guarantee there aren’t throws this nice coming out of China!

So as you start making your shopping list this year for the holiday season, if you have a particularly difficult person to buy for that has a wee bit of Scottish heritage in them, definitely consider the line of products offered by Heritage of Scotland. Watch their Facebook page for announcement of regular sales – they usually offer a pretty hefty discount!

And speaking of discounts, to encourage early ordering and planning for the holiday rush, Heritage of Scotland is offering a 11% discount on everything in their catalog by using the exclusive code sahm11discountto30092014! Their inventory changes often with popular items selling out very fast, and do allow a bit of extra time since every order is coming from overseas. I know I’ll be saving up for a kilt of my own to wear to the festival next year. And since I don’t see undergarments offered for sale there, I guess that answers the question as to what the Scots wear under their kilts!

39 thoughts on “Scottish Items NOT Made in China”