Our latest Thrift Treasure came with a free copy of déjà vu. Just reading the instructions caused memories from my childhood to come flooding back. I knew I had played this game many times before! Mille Bornes from Parker Brothers was a classic back then, and is still a classic today.

But a little history first. Back in 1906 the Wallie Door Company published a game called Touring. Parker Bros. bought the rights to it in 1925, and like many games, subsequent editions contained rules changes and the addition (or deletion) of other components. This might alter game play slightly, but the overall theme remained the same.

Mille Bornes is generally believe to be a derivative of Touring invented by Edmond Dujardin. It is nearly identical to Touring with the exception of the inclusion of an additional rule, the coup-fourré (a French fencing term meaning “counter-thrust”). This rule awards extra points for sitting on safety cards until your opponent plays a corresponding hazard card.

The object of Mille Bornes is to be the first person (or team) to accumulate a total of 5000 points across several hands of play. In doing so, players try to complete trips of exactly 1000 miles in each hand played. 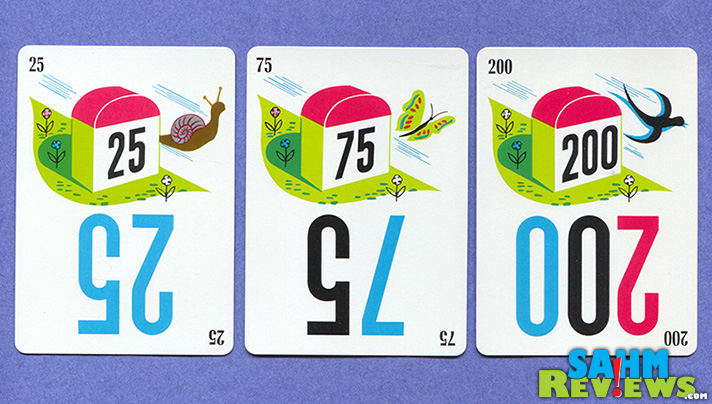 These are the cards with milestones on them. Each one represents a distance traveled of 25, 50, 75, 100 or 200 miles. When played on the table, they are added together to determine the distance traveled for that hand’s trip. 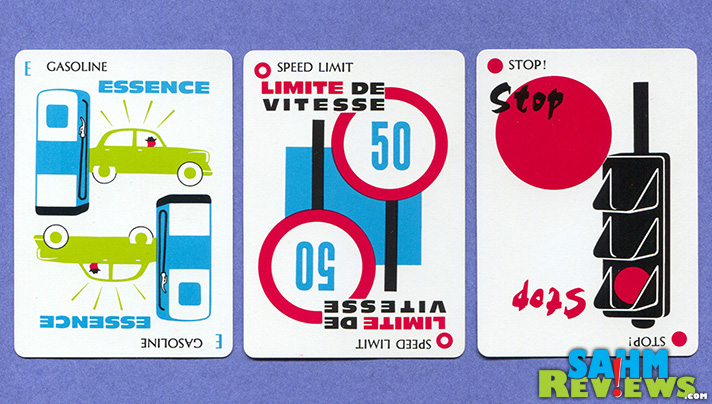 Hazard cards are predominantly red and blue or red and black in color. They are played against your opponents to hinder their progress. 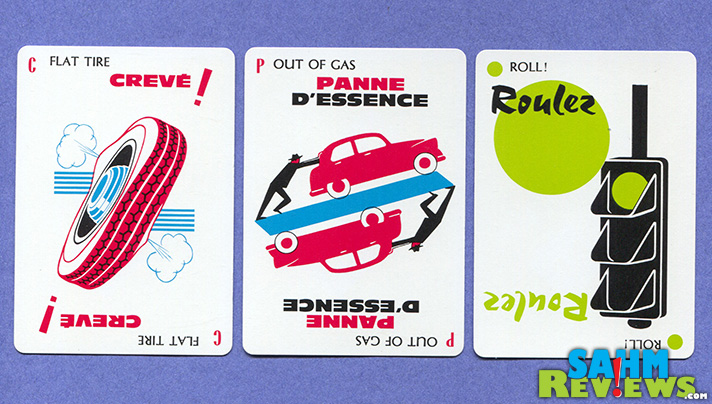 Remedy cards are typically blue and green or black and green in color. They are used only on your own pile to overcome hazard cards that an opponent has already played against you. There are also a few safety cards that will completely prevent an opponent from playing a hazard on you in the first place such as an extra tank, puncture-proof tires or right-of-way.

Each player is dealt six cards face down which becomes their hand. The remaining cards are put in the included tray in the side marked ‘draw’.

Each player creates his own play area in front of him by playing their cards in the correct spots. You will create a battle pile, a speed pile, a safety area and distance piles. On your turn you draw a card from the draw pile and then play one to the play area.

In order to begin your battle pile, you must play a Roll Card first. Without a roll card played, you may not play any distance cards at all. Once your roll card is out, then you may start moving, but your opponent can also begin to subject you to hazards.

Distance cards are played to your distance piles are are kept separate by number for ease of calculation. Safety cards are placed in the safety area and prevent hazards from being played on you for the rest of the hand. If the hazard was already in place, this cancels it out and is scored at the end as a coup-fourré. In addition, the play of any safety card awards you with another turn, to be taken immediately.

Play continues in order until one person has a total of exactly 1000 miles. Distances are totaled for everyone, even if 1000 miles was not reached. Various bonuses are also awarded for things like completing a trip without using 200 miles cards (300 points) and shutting out your opponent by completing your trip before they play any distance cards (500 points). Again, first person or team to 5000 points is declared the winner.

Mille Bornes is still being issued today by Asmodee and you can find copies on Amazon for under $12. Touring is 109 years old this year and is still being made by Winning Moves. Copies of it will only set you back $8! If you’ve never played this game, you’ve been missing out on a classic that generations and generations have enjoyed.