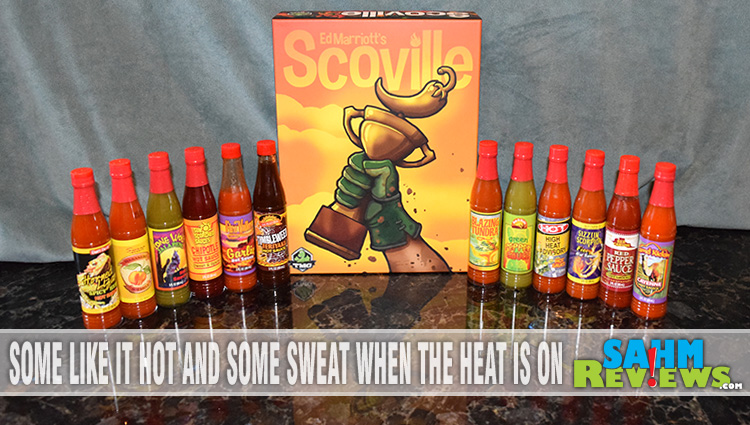 Following in the footsteps of her uncle, our oldest has discovered she likes spicy foods. She chooses the hottest salsa at Chipotle, steals my chicken wings when we make them at home and has started adding Frank’s Red Hot to her canned ravioli. I’ve always liked spice on my food, but she’s taken it to another level. We encourage her to experiment with foods and flavors so she can decide herself what she likes, so we bought her one of those gift packs of hot sauces from Walmart for Christmas. She’s burned through a couple of them already…

Interestingly she has also shown interest in learning exactly what makes a pepper hot. She knows there are different levels and intensities of hotness, but until recently didn’t realize there was a scale of measurement – the Scoville scale. Named after American pharmacist Wilbur Scoville, the Scoville scale is the measurement of the pungency (spicy heat) of chili peppers or other spicy foods.  The results are represented in a number ranging from zero (a bell pepper) to over 2 million (the Carolina Reaper pepper). All other peppers fall somewhere in between.

When the opportunity to play a new game named after this scale was presented, we could not refuse. Scoville by Tasty Minstrel Games is brand new to the market after a very successful Kickstarter campaign where they raised nearly three times their requested amount. 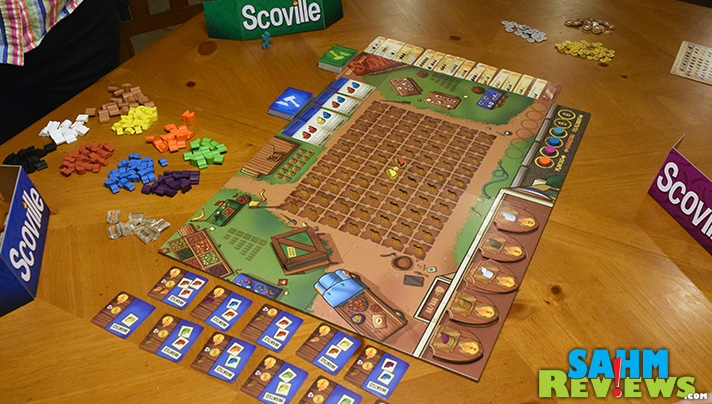 It is hard to compare Scoville to any other game we’ve featured here on SahmReviews as it definitely has a different mechanic than anything else in our collection. You play the role of a pepper farmer who plants, harvests and sells his peppers, along with using them to create custom recipes worth varying amounts of end-game points. 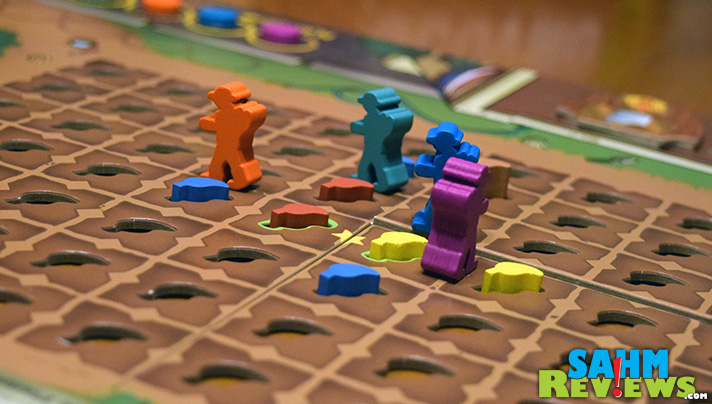 Each player starts with one of each color of the basic peppers (red, blue & yellow). You also get action tiles and $10 in coins to use during the game. On each turn you do the same thing – first you claim an auction card from the auction house and receive whatever peppers are on that card. Then you plant a pepper in one of the empty die-cut spots on the board. At that point it is time to harvest. You move your farmer three spots on the board, following the paths between the planted peppers. As you land on each spot, you harvest a new pepper whose color is determine by an included pepper chart.

Land between a blue and yellow pepper, receive a green pepper. Between blue and red? Get a purple pepper. You get the idea. Oddly, although the game is designed for 2-6 players, there are only 4 of these charts included. 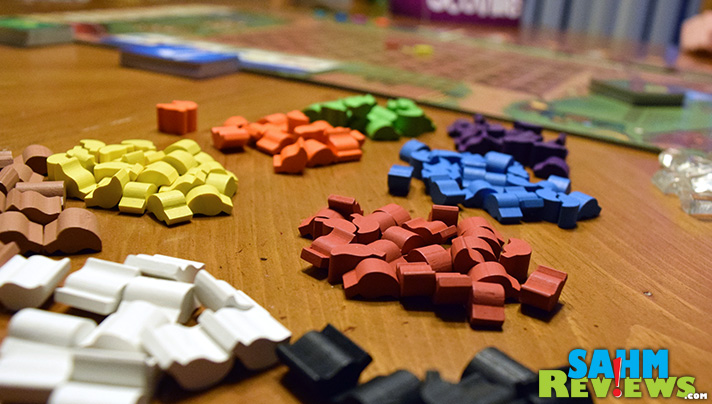 While you can stick with the basic colors, the object it to create combinations that will yield rarer peppers that are worth more to the buyers and needed in some of the expensive recipes.

And since I mentioned them, once harvesting is completed you now visit the farmer’s market where buyers are lined up with specific wants and points to award for fulfilling their contract.

You can also compete in a chili cook-off that also yields victory points by collecting all of the peppers needed for that particular recipe.

And one last incentive to plant your peppers quickly. There are bonuses for being the 1st/2nd/etc. to plant a particular type of pepper in the farm. All of these items (bonuses, recipes and contracts) are saved behind your player shield along with your pepper inventory until the end of the game when the points are tallied. 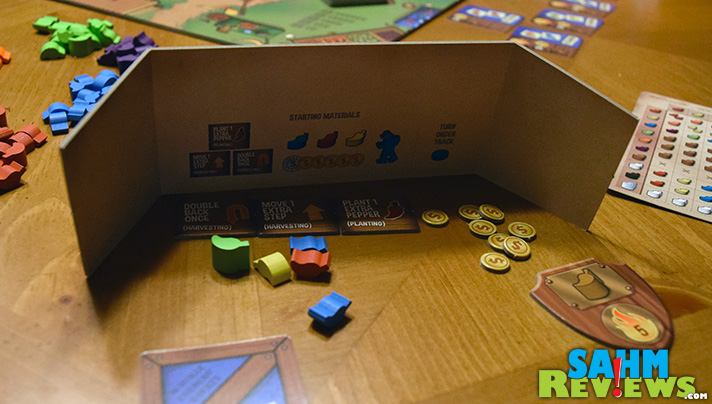 You cannot do everything, so you must choose a strategy. Fulfill contracts? Save your peppers for recipes? Or just cash them in at the end of your turn for cash? Depending on how the peppers are planted and what your opponents are gunning for will all play into your strategic decisions. 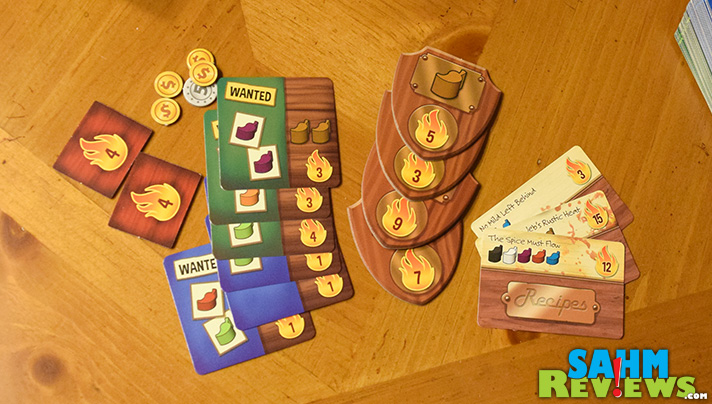 Expect each game to last 60-90 minutes and to create enemies as you steal your opponents recipe or contract. In fact, this is the first game I’ve ever played where I was physically attacked for making a play that affected my wife. Must have been something in the peppers.

You might remember our mention of Coal Baron and our dislike of the paper money included in the game. We decided to print our own with a matching theme and believe it enhanced the game quite a bit. Thanks to a slight oversight by Scoville’s manufacturer, we needed to do something similar for this game.

Tasty Minstrel Games playtested this game thoroughly before and during the Kickstarter campaign, and again at the annual GenCon convention in Indianapolis. They found that at times you would run out of some of the wooden peppers depending on how people collected (hoarded) them. They attempted to resolve this by including many more of certain colors in the box compared to the inventory list in the instructions. Unfortunately this hasn’t solved the problem 100%. Of the 6+ sessions we have logged, only during one did we not run out of peppers.

One fan-made solution was to make a set of pepper multipliers that you print on Avery labels and apply them to the punched-out cardboard peppers from the board. 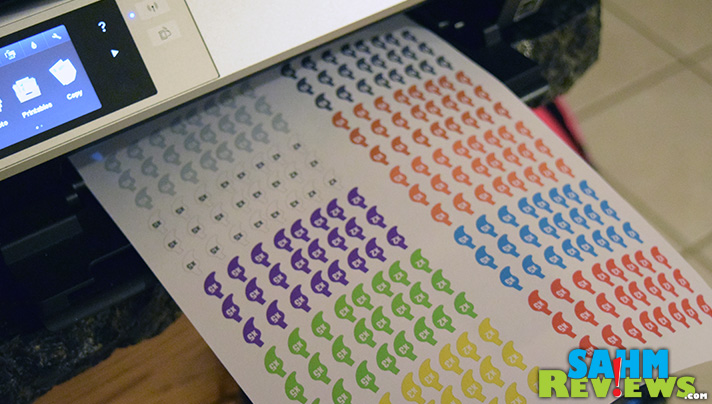 We attempted this solution but quickly found that the dexterity required to accurately cut out these tiny peppers was beyond what my 40-something hands could do. I had saved the cardboard chits, and since I have two daughters, came up with a perfect solution. 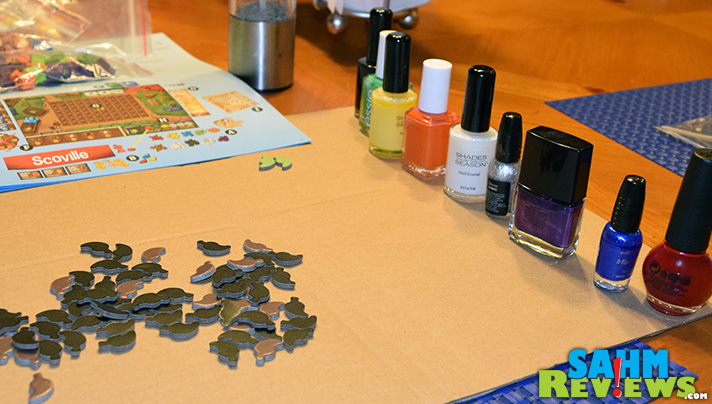 Nail polish! Every father that has a daughter has access to an entire rainbow of nail polish. And because they are designed to paint onto tiny hands, the brushes are the perfect size for this project. The fact that most are enamels means that the end result should be long-lasting. 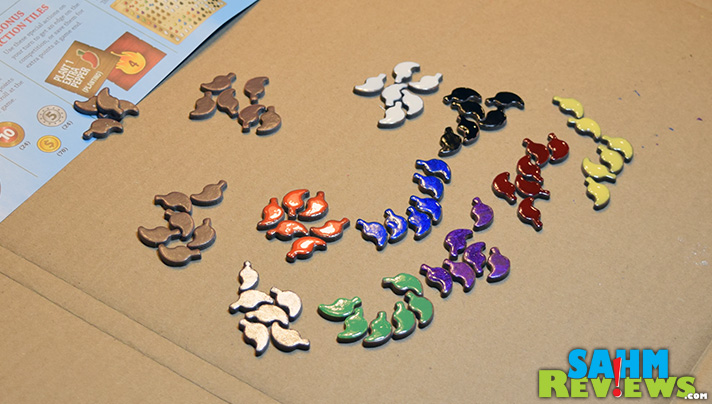 Subsequent sessions (ranging from 4 to 6 players) have shown that these six additional peppers have been enough to not run out during the game. I kept a few of the extras in case I need to make more, but I think we’re good to go.

I’ve had discussions with Tasty Minstrel Games about “Pepper-Gate” and they’ve assured me that they are working on a solution. It may come in the form of extra peppers in a future expansion or as a stand-alone option to upgrade your game. Either way, based on TMG’s history, I have no doubt that everyone will be pleased.

Missing peppers aside, you won’t go wrong adding this game to your family’s collection. Find copies on Amazon or from your local game store. Check out their Facebook and Twitter timelines for news about new releases and acquisitions. We’ll be bringing you information about one of their latest, AquaSphere, very shortly!

39 comments on «Scoville Board Game Overview»