We’re always pushing our luck when we expose our kids to more and more advanced types of games. They either get lost in the numbers and complexity (rarely) or they take a chunk out of our egos when they thoroughly trounce us on their own (more often). But when it comes to playing games with other children their age they tend to revert to games that have designs and motifs that are targeted towards them and not a 20-something male.  Don’t get me wrong, they love a good zombie or alien-themed game, but their friends just aren’t as game-cultured as our daughters. They’re more comfortable with hippos and cats than tanks and meeples.

We had been seeing posts online about a new strategy game by Thunderworks Games that was appealing to both young and old.  Kids for the thematic and graphics, but also seasoned players because of the complexity of strategy needed to consistently win. A game that teaches this type of critical thinking AND will be something that our girls aren’t afraid to show off to their friends? We’re all-in! 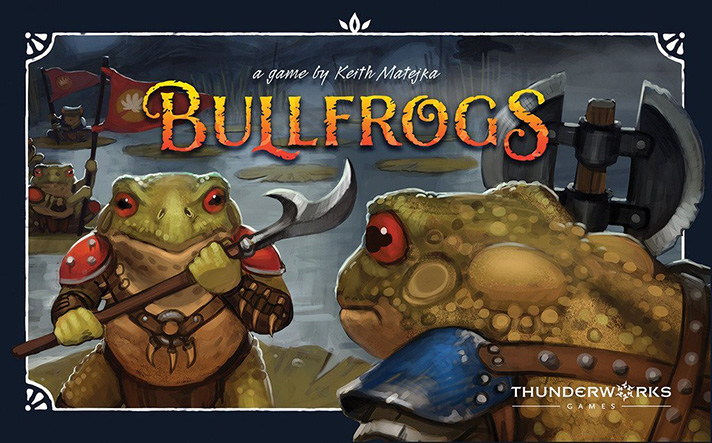 At first glance, Bullfrogs appears to be just another card game. This assumption couldn’t be farther from the truth. Each player is responsible for their family of frogs, headed by two larger bullfrogs. As you can imagine, the bullfrogs have special actions and should be protected during the game to maximize your score. 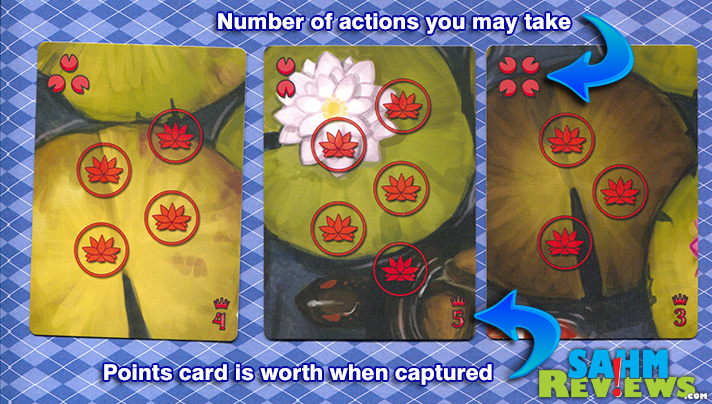 Every player also has their own deck of cards containing various sizes of lily pads. Working from a hand of three cards, you play one at the beginning of each turn. A card is only placed next to an existing pad or log, and must connect horizontally or vertically. Think of lily pads in a pond, they drift towards each other making a cluster – this is the idea behind the layout of Bullfrogs. 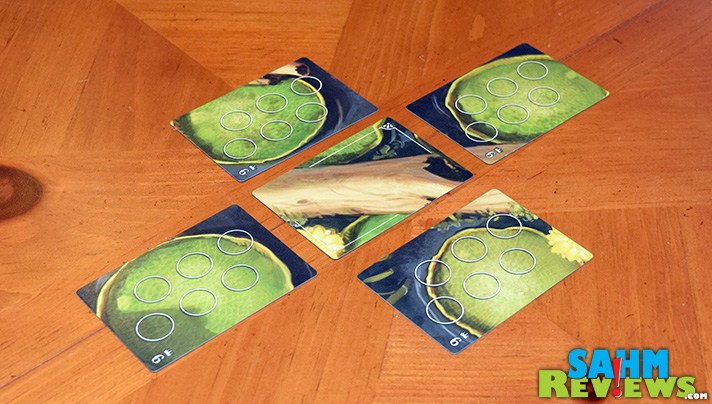 Each game starts in the same manner. An immovable log is place and four starting lily pads are set on all adjacent sides. The first player places their selected card and then takes the appropriate number of actions listed on the top left corner of that card. For each their actions they can either place one of their frogs on a lily pad that is in the same row or column as the pad they just played, or move any of their opponents frogs to an adjacent lily pad (hop!). 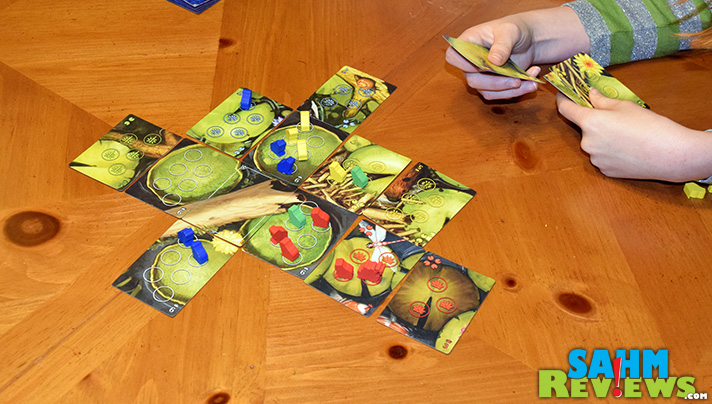 When all of the circles on a pad are filled, a ‘war’ commences and the lily pad sinks. The player who has the most frogs on a pad wins that card (and the points associated with it) and it is removed from the game. But what about the frogs? Like in real war, there are casualties. Frogs are able to escape to neighboring lily pads, but in a specific order. Your opponents’ frogs jump first, then their bullfrogs, then your frogs and then your bullfrog. Even though you might win the war for that pad, you probably will suffer the most with your dying frogs being returned to your pile and any dead bullfrogs are removed from the game. 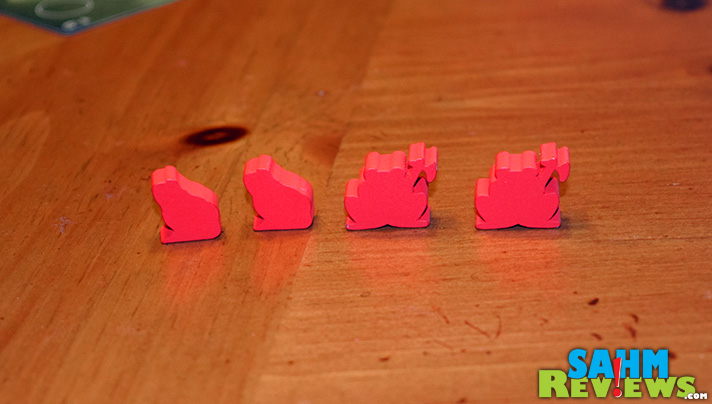 This is when the magic of the game really happens. When a lily pad is sunk, it usually creates either wars on other lily pads or lily pads that are no longer connected to the main group (or both). Once all wars have been resolved, the active player then gets to ‘float’ the loose lily pads to new positions on the board. The ‘current’ might even cause a lily pad to move all the way to the other side of the patch! Strategic planning is definitely in order to either plan our your next move or to prevent the other players from getting a stronghold on the log.

The log – I should mention that this is the only card that cannot move. Frogs and bullfrogs are able to jump on it, and once they are there they are safe for the rest of the game. This is another scoring opportunity to consider, as the player with the most frogs on the log wins bonus points. In addition, when you calculate your score, any lily pads that you captured that match your color also garner an additional point towards victory. Every time we’ve played the scores have been rather close and sometimes the player who appears well in the lead ends up being the loser due to not paying attention to the bonuses won by their opponents!

Bullfrogs is the first game release from Thunderworks Games, based in Madison, Wisconsin. Its small box size, with a matching small price of under $30, makes this a “kill-two-birds-with-one-stone” title. You’ll appease both the kiddos and the adults by opening up a game that is fun and challenging for them all. Thunderworks Games has another title in the works that you should see on Kickstarter this summer called Roll Player. Keep an eye out for updates on this and Bullfrogs by following them on Facebook and Twitter.

24 thoughts on “Frogger Without the Cars & Buses”