I am old enough (just barely) to remember performing bomb drills in grade school. They were usually coupled with the more frequent tornado drills, but it was obvious to this 5yr old that they were very different. At the time I didn’t really understand why someone would want to bomb us, but I did as told and got under my desk.

Then in high school I remember learning about The Manhattan Project. The name stuck in my mind because again, why would someone want to bomb New York? Yeah, history wasn’t my best subject. I did remember it had something to do with WWII and the atomic bombs, but that’s all that stuck. I didn’t remember there was actually a ‘race’ with other countries to be the first to develop the technology. Nor did I recall there were actually two types of bombs. And I certainly forgot there were more on order from Major General Leslie Groves to the tune of three per week! That is until a game from Minion Games brought all of those tucked-away facts back. 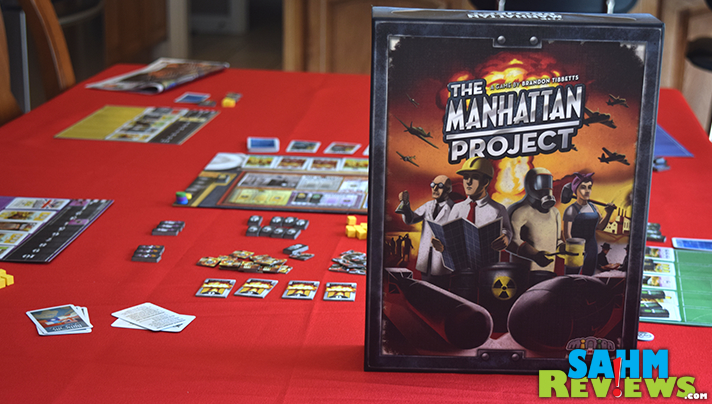 The Manhattan Project is a refreshingly accurate portrayal of the nuclear arms race during the latter part of World War II. Each player represents a country (with the highly-recommended Nations Expansion) trying to be the first to develop their own arsenal of either uranium or plutonium-based weapons. This is a true worker-placement game with a scoring twist. In most games of this type at the end of every round you do some intermediate scoring and then a final scoring after a pre-determined number of turns. Not so in this one! 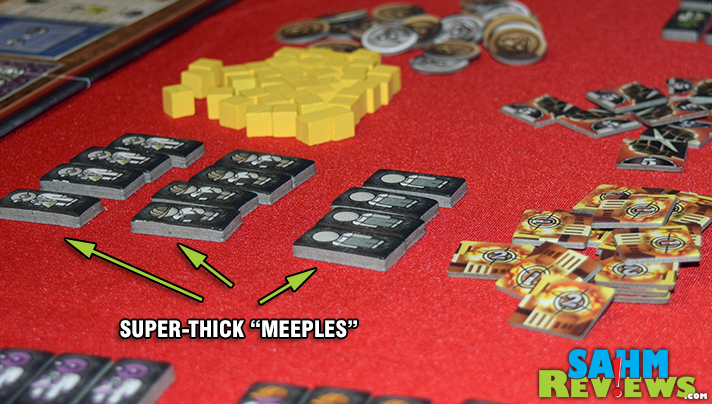 You begin the game with four generic workers (manufactured on super-thick cardboard, making them VERY easy to handle) and place as many as you wish on your turn. The only placement rule is as follows – you may place one worker per turn on the main board and then as many as you’d like on your board (or your opponents’). When you run out of workers to place, you must spend the next turn calling them home. 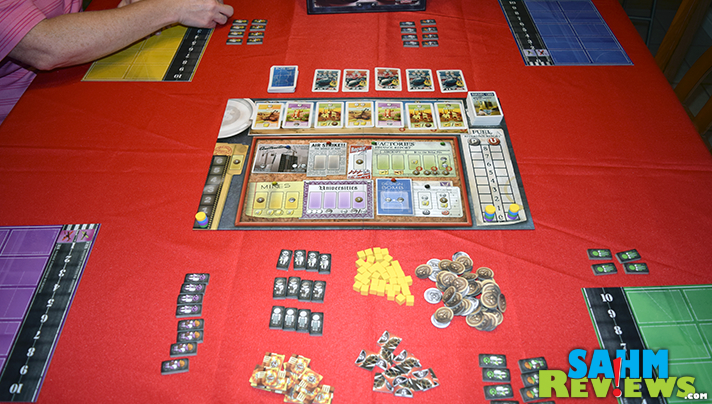 With only four workers, you’ll find yourself running out of things to do rather quickly, so it becomes important to upgrade them to engineers or scientists. Remember, you’re building bombs and regular ‘Joe’ isn’t knowledgeable enough to do it on his own. So you send him to University to become one of the two professions. 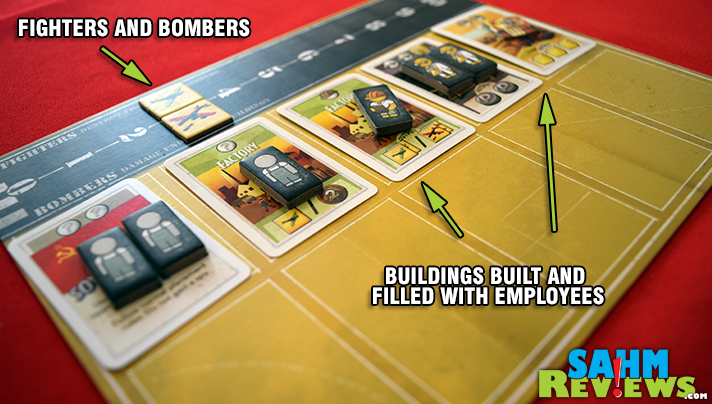 There are a number of other things your workers (and chemists/engineers) can do on their turn. They can recruit more people onto your team, build buildings in your country, mine for uranium, transmute the uranium into plutonium and even spy on other countries! Everyone can choose a different path, but ultimately you all have to try to build bombs. 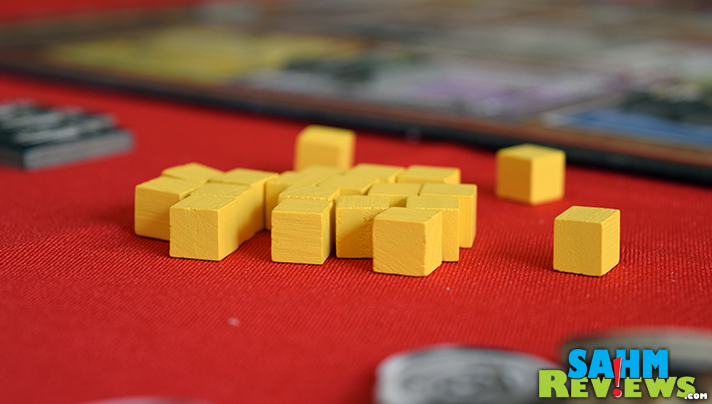 Back to the long-lost facts. If I asked you what yellowcake was, would you refer me to a recipe? Or did you remember that it is actually the nickname of a type of uranium powder obtained during one of the ore processing steps? Yeah, me either. Yellowcake is what you might consider the currency of The Manhattan Project. You’ll need to mine it to build your uranium bombs or convert it into plutonium to develop an even more powerful version. 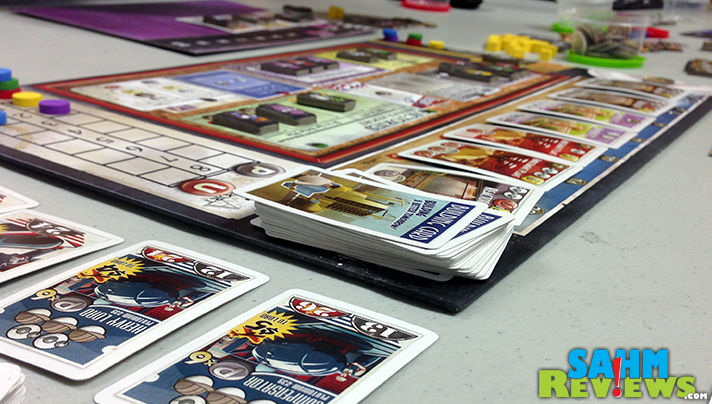 Huge decks of cards guarantee that no two games will play the same. The randomness of the available buildings coupled with different types of bombs being available means the strategy you start the game with may not be the one that gets you to the end. 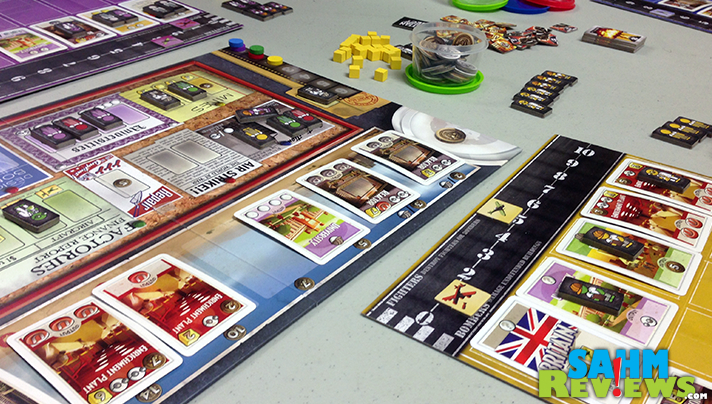 Of course, what is war without destruction?! You can take your fighters and bombers to another player in an attempt to temporarily destroy their buildings – a perfect solution for the person who looks like they’re running away with a win.

It would be next to impossible to lay out every rule and action you can take in The Manhattan Project – there are just too many! And that’s what makes the game so much fun! You can experiment with different strategies each time – send in your spies, cripple your opponents with bombs, spend all of your time building and recruiting – there’s a strategy for everyone (well, except maybe the pacifist in the family)!

Out of the box The Manhattan Project is a fantastic game that can be easily played by children as young as 8 years old, but enough deep strategy for adult of all ages. If you like worker-placement games, this one should be on your wishlist. The theme fits the mechanics so well, something that I’ve seen forced in other games. 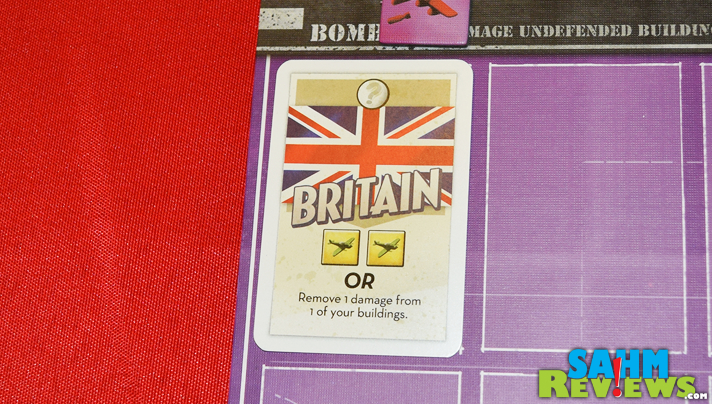 I do have to say that after playing your first game, you should invest in the inexpensive Nations Expansion. Allowing each player to have a different ability makes the game that much more enjoyable (and really should have been part of the base game). There is also a new expansion called “Second Stage” that adds additional nations, rockets and even a hydrogen bomb which we hope to be able to show to you in the very near future!

You can pick up your own copy of The Manhattan Project on Amazon usually for around $35 shipped (maybe less during the holiday season). This is a solid game that will get many plays from your family and should be under your Christmas tree this year.

Find out what other great titles Minion Games is working on by following them on Twitter and Facebook. I hear rumors of an upcoming Kickstarter campaign in The Manhattan Project series, and we cannot wait to see what it is all about!