One of the biggest barriers to people trying new games is the difficulty in grasping unfamiliar game mechanics or reading pages upon pages of instructions. We’re fortunate enough to have a friend who volunteers to read directions for new games in advance of our Sunday game meetup. Most of the time, we take him up on that because it saves us a lot of time. When it comes to more advanced board games, it isn’t very often that we come across a set of rules that is as simplified that of Tapestry from Stonemaier Games. I’m predicting that this article will have a higher word count than Jamey Stegmaier’s rule book. 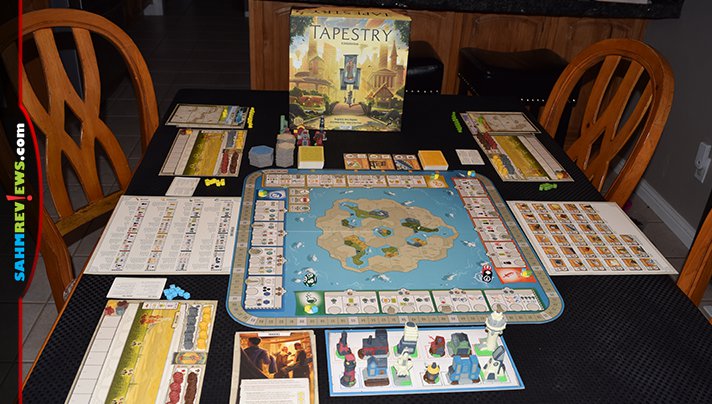 All joking aside, there actually is quite a bit going on in Tapestry. With a single player version or up to five total players and lasting a couple of hours, it’s an elegant intersection of simplicity and complexity. The rule book is literally only four pages long and that includes one entire page that simply lists the components and shows the setup. As you can see from the image above, there are lots of pieces and mini-boards. I assure you, it isn’t confusing once you get going. To set up the game, the main board is placed in the center of the table. The various decks and tiles are shuffled and placed alongside it. The landmark board is filled with its designated buildings while additional buildings are arranged near the decks and tiles.

Each player selects a board and the associated color pieces then fills in the income spaces with their buildings (brown farms, grey houses, yellow markets and red armories). I’m having flashbacks to a Lucky Charms commercial… but I digress. The four markers for resources (coin, worker, food and culture) are assigned to the zero space on the income board. Each player also will take a random Capital City mat and civilization mat. Players organize their outpost tokens then place two on the territory map space the corresponds with their designated capital city. 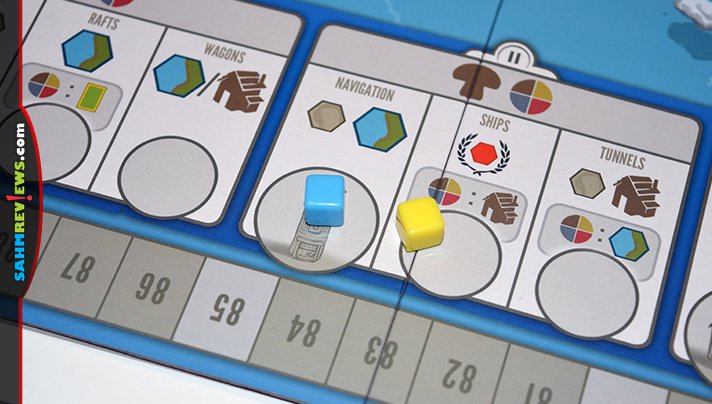 On your turn, you have only two options. You’ll either advance a token on one of the four advancement tracks or you’ll collect income to indicate you are beginning a new era. To move a space on the advancement track, you’ll need to pay the associated fee then you may take the related action. The four tracks each have their own purpose that relate to exploration, science, technology and military. 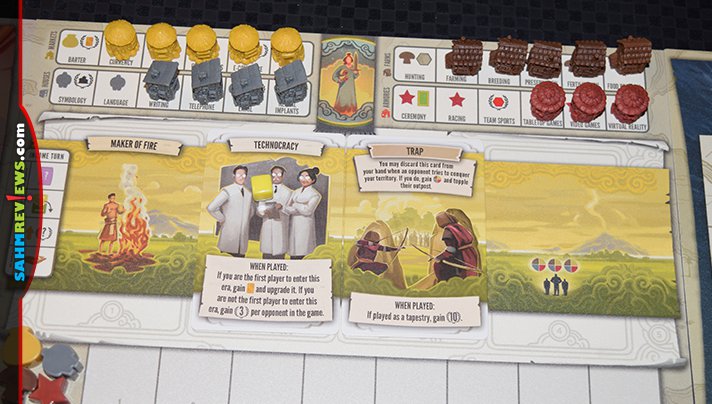 If you can’t or don’t want to advance any further, you may opt to begin a new era. This involves four steps that include taking the specific action of your civilization card (everyone’s is different), play a tapestry card, upgrade tech and gain victory points then finally gain income. The amount of income you receive is directly related to the number of buildings you have been able to transfer from your income mat to your capital city mat.

The capital city mat offers a couple of benefits. As I mentioned before, each building that you remove from your income mat and place on your capital city mat opens up additional resource and scoring spaces. You’ll collect those each era. On your city map, you’ll notice that some spaces are already marked off. As you complete each section of nine spaces by filling in the non-marked areas, you’ll earn a resource of your choosing. In addition, you’ll receive victory points each era for each row and column you have completed. There are a couple of ways to earn the larger buildings that help fill up the spaces quicker. Both of those options involve the advancement track. Some buildings are earned by being the first to designated spaces on each track while others are acquired by advancing technology. 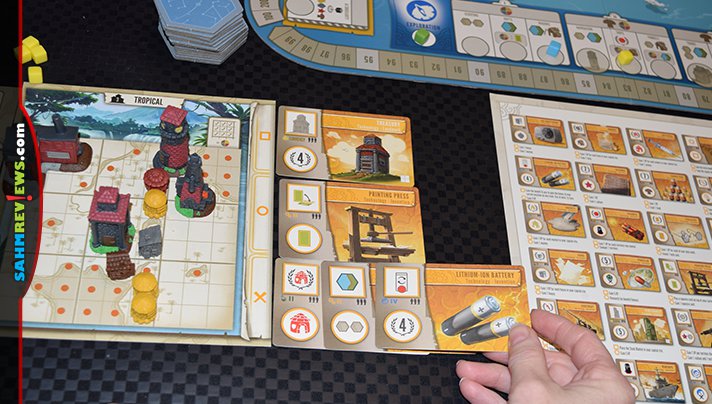 On the technology track, there are spaces where you select one of the face-up technology cards. As I mentioned at the beginning of each era, one of the actions is to advance a piece of technology. You’ll earn the first (circle) benefit when you reach that level and the second (square) when you upgrade it again. There are spaces on the board that also allow you to make these technological improvements to your civilization. 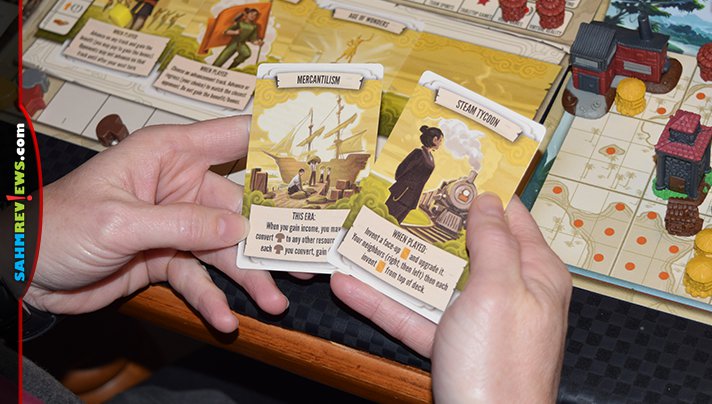 Also on the technology track, you can earn additional Tapestry cards. These are used at the beginning of each era and allow you to immediately take a specific bonus or at any time during that era. Some even offer defense during military actions. 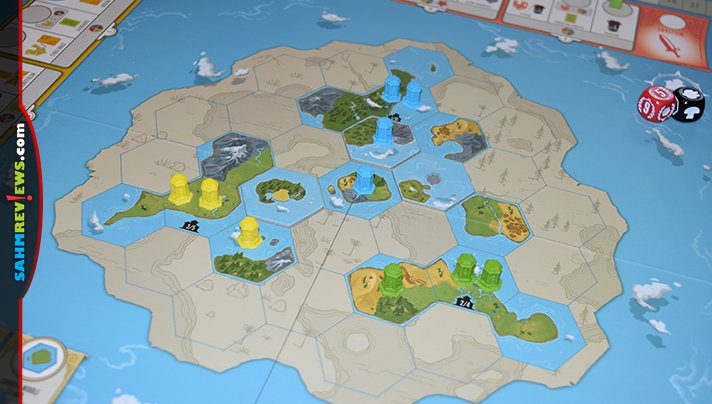 It’s worth mentioning that the other three advancement tracks (exploration, science and military) also have specific purposes also. Exploration allows you to earn tiles and place them on the territory map while military involves marching across to claim space on it. The science track offers a variety of other benefits including the opportunity to advance on any track without paying the related fee. Each of these tracks have associated buildings that you’ll want to open up on your income mat – and fill in on your capital city map!

Each person is really playing their own game and will end their own round (era) when it fits their resources and planning goals. There are definitely times when you impact another player’s actions, but for the most part the only thing you have to think about is 1) advancing on the track or 2) beginning a new era. This simple piece of groundwork is what makes Tapestry an approachable game while the depth of directions you can take within each advancement make it a draw for more advanced players. If you think you’re up for the task of building your own civilization, visit the Stonemaier Games website to order Tapestry direct or reserve a copy from retailers (releases November 1st). You can also order Tapestry board game from Amazon. If you’re looking for something a little more “for the birds”, I encourage you to read our overview of Wingspan. Having trouble finding copies of Tapestry? Follow Stonemaier Games on Facebook and Twitter or Jamey Stegmaier on Twitter for regular updates on this and their other excellent games.

It’s only been a year since we discovered Tapestry by Stonemaier Games and already there is a perfectly-timed expansion on the market. I say “perfectly-timed” because not only does Plans and Ploys include expansion content for the base game, rules are included for both an updated solo mode AND a challenging scenario designed for two players. In a time where we have difficulty finding a full table of board game players, having the option to enjoy Tapestry with a smaller player count is highly appreciated. 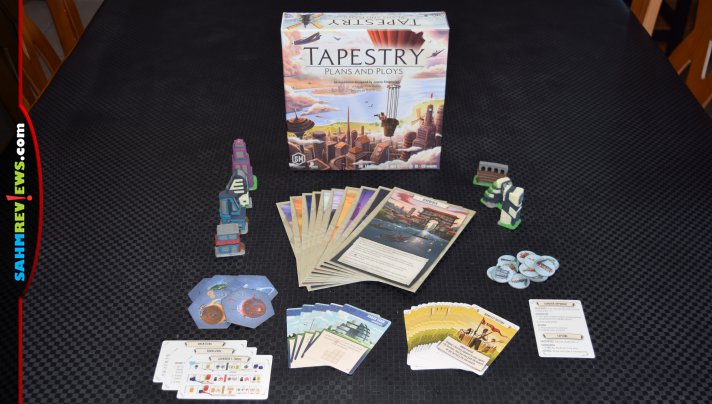 The first thing you’ll notice in the box are ten new civilization mats, giving the game an ever broader asymmetrical range. Spies, Tinkerers, Aliens and Riverfolk are among these new characters, each with their own abilities and benefits. Since there are ten, you can just use these new civilizations or mix them in with the base game to make the setup more random. 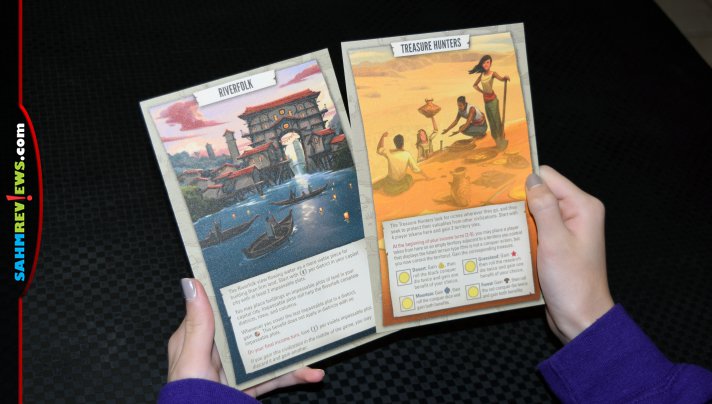 Five Landmark cards are new to the game and a number are drawn equal to the number of players. The player beginning the game last chooses their preference and passes the rest to the player on their right. The start player will receive whatever is left over. Each Landmark card included a matching pre-painted 3D representation of the building, as in the base game. The difference is only the player holding that particular landmark card has a chance at earning it once they complete the goal listed on the card. 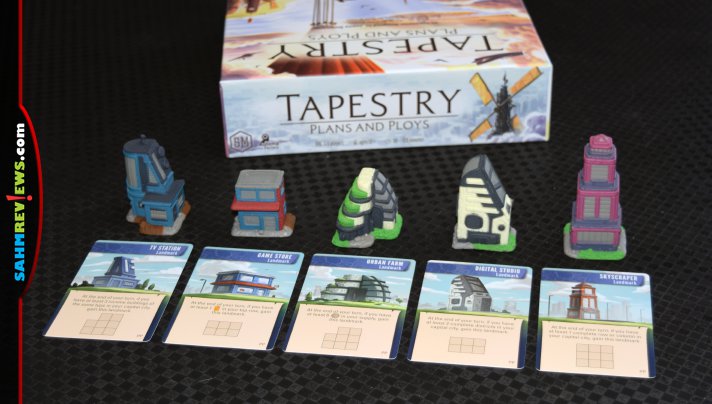 Fifteen new Tapestry cards are also in this expansion and add a little more conflict to the map area in the center of the board. Additionally, four new space tiles (and an extra that replaces one in the base game) make earning them more attractive as they will award an ongoing effect instead of just a one-time bonus. 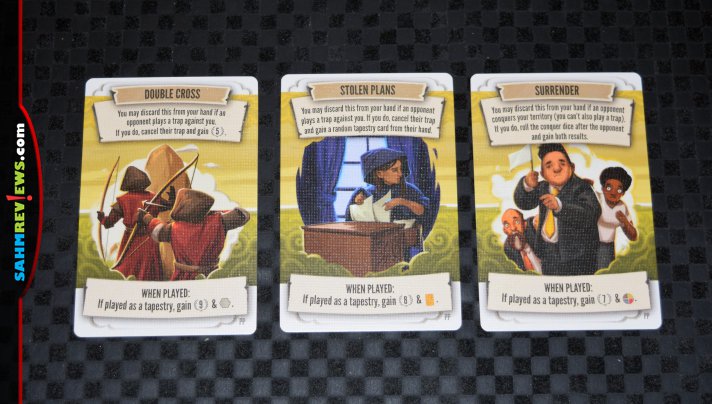 There are also new setup rules for the old civilizations to better balance the game. I have to say, we did not experience any particular civilization that seemed to be a sure-fire win, but after thousands upon thousands of plays by the public and some amazing mathematical calculations by members on BoardGameGeek, it was determined that a couple of them needed tweaking for the hardcore game players. These have been constantly updated on Stonemaier’s website over the past year and are included on the back of the new rulebook! 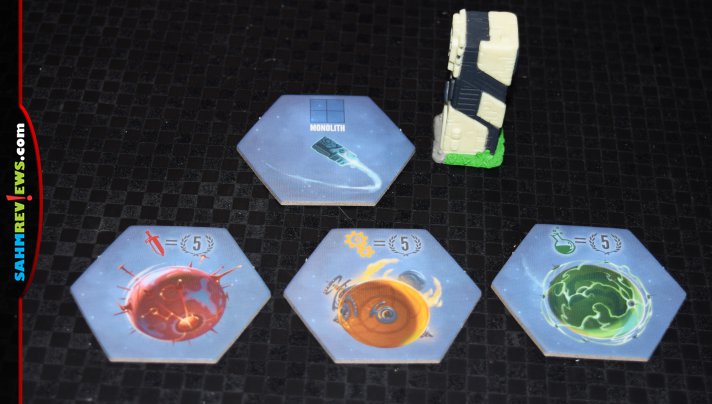 We don’t always recommend expansions to every game, but this is one you’ll probably want to get if you already own Tapestry. The addition of Landmarks makes the pattern-building a little less frustrating since no one can take that from you and the variety of the new civilizations freshens the game for a lot more plays. Plus, there is rumor of another expansion coming out in 2021! You don’t want to be left behind! 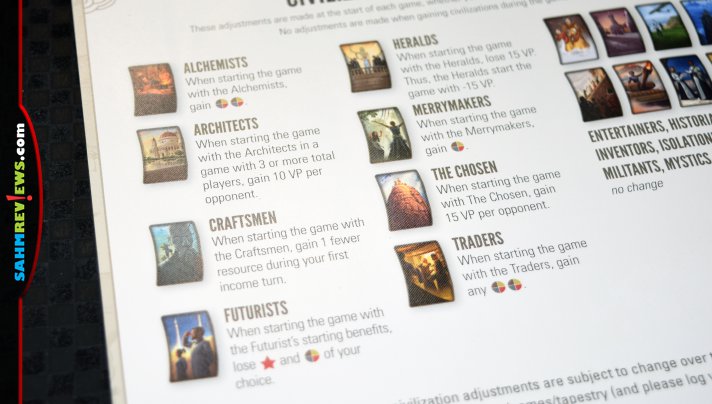 Pick up a copy of Plans and Ploys at your favorite local game store, direct from Stonemaier Games on their website or via Prime shipping on Amazon. They also have an option to purchase extra dice, which we certainly will once convention season starts again, so we don’t have to pass them from player to player as often!

Which is your favorite civilization to play?