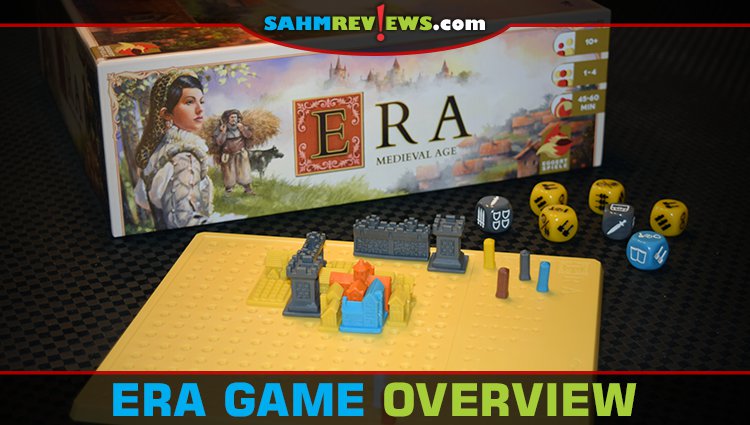 When asked what my favorite games are, my answer is often complicated. I typically respond with an audible asterisk and a comment, “Depends on what type of game.” If we’re talking about party games, it’s a different answer than if we’re talking about something in the flip/roll and write genre. Year over year, those titles may change as new games enter the market. Pandemic, on the other hand, is almost always on the top of my list. I’m not talking about the Coronavirus, but rather the cooperative board game designed by Matt Leacock.

It’s hard to admit, but Scott and I often end up investing our time in 2-player games because the girls are simply too busy. Maybe it’s just me, but Pandemic isn’t fun for two. The latest game from Matt Leacock IS fun for two… or three… or four. Unlike Pandemic, Era: Medieval Age from Eggertspiele is not a cooperative game. You’re taking on the role of a Lord during the Medieval Age. Players develop medieval cities by collecting resources, building structures and defending against your competitors. 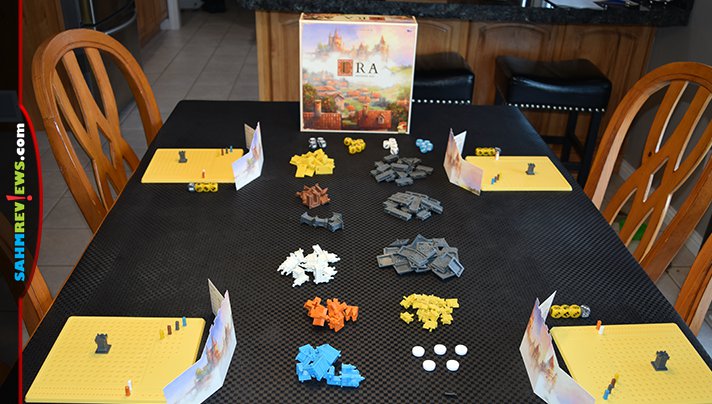 Setup of Era: Medieval Age varies based on the number of players, but generally it’s the same. You’ll adjust the number of buildings and structures as well as tracking tokens. Begin by giving each player three yellow dice, one gray die, one keep, three longhouses, one farm, three walls, a screen, board and one of each color of peg (excluding black) that are placed in their appropriate slots. In the center of the table, sort the buildings by color and type. Place your keep in the exact center of your board then use your screen to block your opponents from seeing where you place the rest of your buildings. 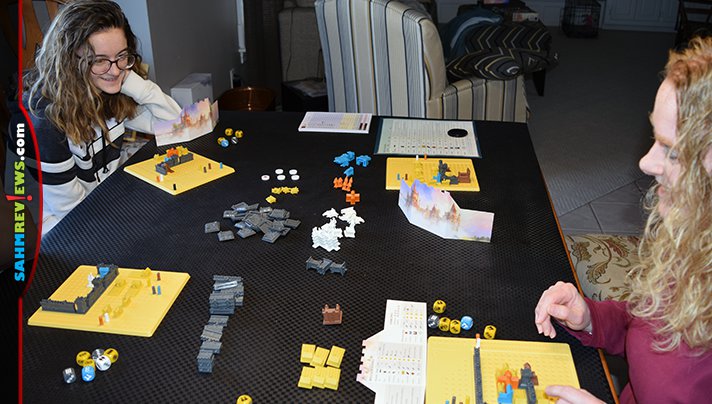 On the right side of your board are two tracking sections. The first outlines the order of events. The first player will change each round and the active player is responsible for using the black peg to track the round’s steps. Below that is a section for recording culture (points) and disaster (negative points). Instead of collecting pieces of wood, stone, grain and trade goods, the pegs across the top of the board are how you track your resources. These are primarily used to feed the people and purchase buildings. 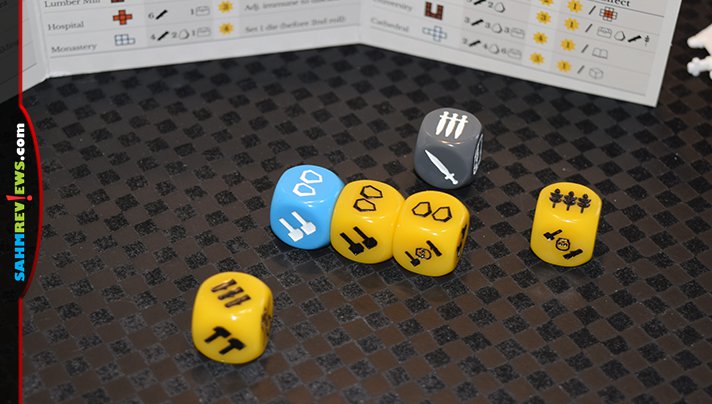 Some steps in a round of Era: Medieval Age are simultaneous for all players while a few go in turn order starting with the first player. At the beginning of the round, players roll all their dice behind their player screen, keeping the results secret until all players have finished this step. Each color is unique and offers a variety of possible results including food, stone, wood, goods, shields, swords, hammers, feathers, culture and skulls. If you roll a skull, you may not reroll that die. All other dice may be rolled again. The process repeats and you can take a third roll if you like. 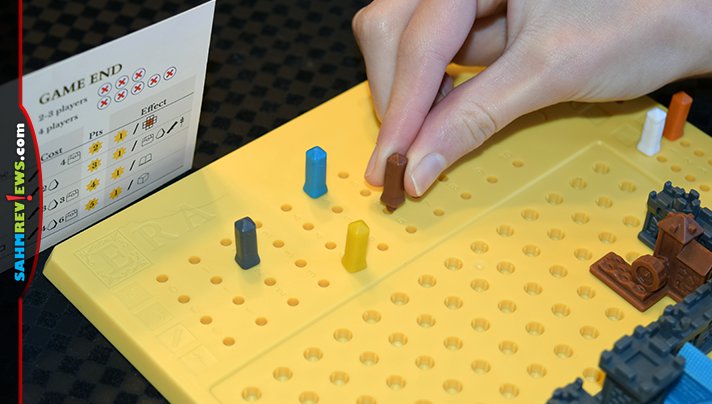 The next step is to collect all your resources, including any that you’ve earned from having farms or a lumber mill in your city. If you reach the maximum, you do not earn additional, even if you know you’ll be spending them this round. Feeding your people is the next action. You’ll subtract one food for each person (die) that is working in your city. If you’re unable to feed all your people, you suffer famine and advance your peg on the disaster track for each person you have failed to provide with nourishment.

Remember all those skulls you had to set aside? This is when they come into play. Depending on how many you have, you’ll take a range of penalties. If you have only one, you may either advance your peg one on the disaster track or lose one resource. When you have three or five skulls, you’ll actual cause damage to your opponents! Two, four, six or more may cause you to advance on the penalty track, lose a building or lose all your goods. 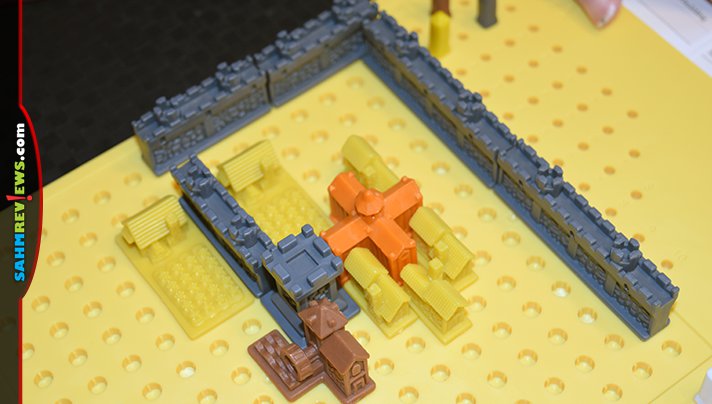 If you saved any hammers from your dice rolls then the fifth step is when they come into play. Beginning with the first player and proceeding clockwise, you spend resources to build various buildings. Some grant you more dice, others allow you to set a die to a specific side while some earn you end game bonus points. The dice represent people working in your city and each round they’ll all need to be fed. You can earn additional people based on the buildings you earn. 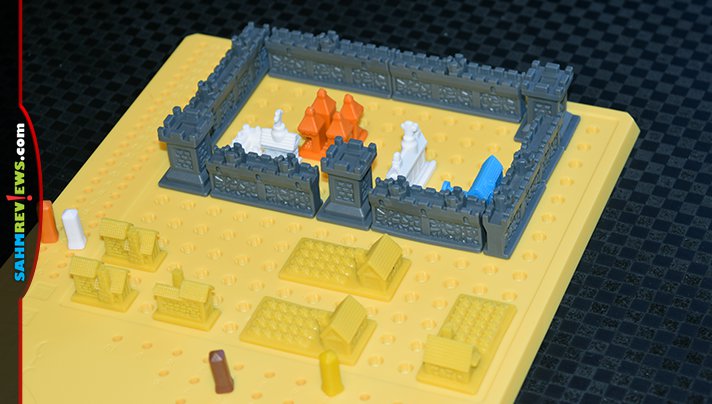 While the heart of Era: Medieval Age is based around placement of polyomino building pieces similar to Tapestry, it’s not quite that straightforward. Buildings aren’t allowed to touch each other unless they’re also adjacent to a hospital so you have to be mindful of what and where you decide to build. In addition, you’ll want to provide protection to your city by enclosing parts of it inside walls. Doing this earns double points for all buildings within that space.

The final step of the round is Extortion. If you’ve collected swords on your dice then you’ll be able to demand resources from players who don’t have swords or shields as defense. For each inferior player, you may request one resource, but opponents may refuse to pay the bribe and instead advance their disaster peg twice. 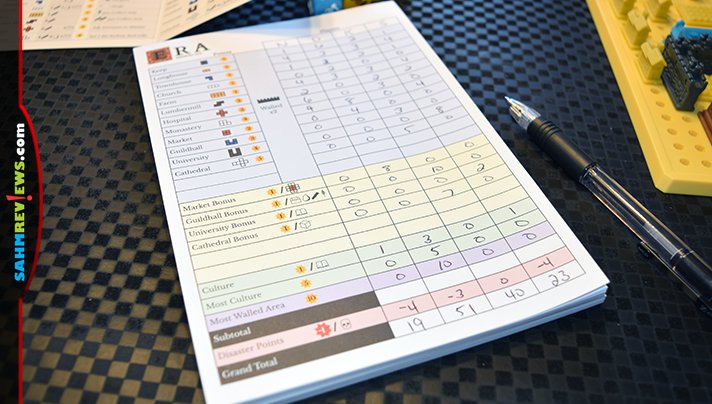 When a building type is depleted, a tracking token is flipped. Once all display an X then the game is over. Scores are tallied for buildings, bonus points, culture and walled area then disasters are deducted. The player with the most points is the winner. It’s entertaining and only takes about 45 minutes to play with four people. Copies of Era: Medieval Age are available on Amazon as well as direct from Eggertspiele. They’ll have new releasing rolling out in 2020 so check out their Facebook and Twitter channels for the latest updates. We’ve heard rumors that there’s an expansion coming so you can bet we’ll be following along!

Have you played any games by this designer?