Home / Recreation / Games / Thrift Treasure: Up the River Board Game 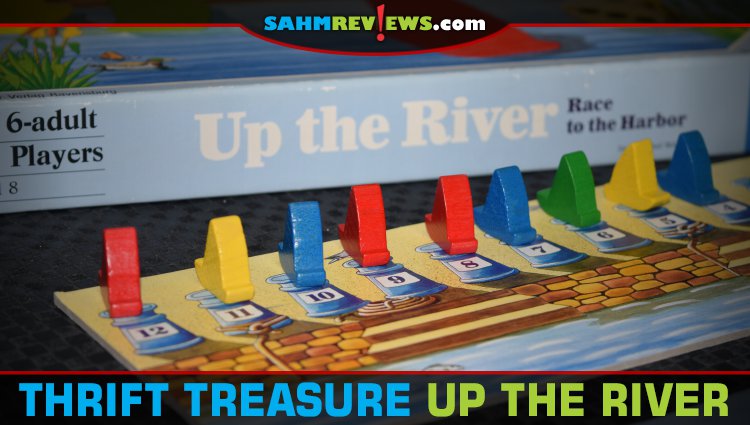 Thrift Treasure: Up the River Board Game

The type of games we picked up at Geekway to the West have varied in price, theme, and type. We’ve shown you card games, board games and dexterity games, all of which are now in our permanent collection. This week we’re playing Up the River by Ravensburger – and it only set us back $2!

Originally published in 1988, Up the River is a racing game for up to four players. Your goal is to get all, or as many of, your boats into the harbor. The box includes sets of three wooden boats in four player colors, a custom six-sided die, a rulebook, ten chipboard river cards and one chipboard Harbor card.

Setup is as quick as laying out the cards as shown on the back of the box and giving each player a set of boats. They will then place their boats on the fourth river card from the bottom to begin the game.

On a player’s turn they will roll the custom die and move one boat the number of spaces up the river equal to their result. If the boat enters the sandbank card, it must stop, even though they may have more movement left. If the boat lands on the card with the waves by exact throw, this means the tide is in your favor and you may move three more cards ahead.

The die is numbered one through five, with the sixth face depicting a set of arrows. When rolling this result, you have a choice. You may either move one of your boats up to the next boat of your color ahead of it (stopping at sandbars, if required), or you can choose to move an opponent backwards to the card which has their next closest boat, ignoring sandbars.

Up the River is more than just rolling and moving. The river is strong, and the current is always against you. After every round, once the turn gets back to the starting player, the tide changes. The bottom card is removed and placed at the top, closest to the harbor. Any boats on that bottom card fall over the waterfall and are out of the game!

Ultimately, you want to get your boats to the top of the river and into the harbor. You do not have to enter with an exact roll – it must be equal to or greater than the number of movements needed. Once you enter the harbor, your boat is placed on the next-highest valued dock. When all boats have entered the harbor, or fallen over the waterfall, the game of Up the River ends. Players receive points based upon the values on their docks. Whomever has the highest total wins!

There have been several games which utilize this type of moving board, but Up the River is one of the first. You can still find new copies on Amazon even though it’s been out of print for a while. At one point the publisher issued it with a space theme, so those might be easier to find. If you want an affordable copy of the original, check eBay!

Would you rather paddle upstream or downstream?