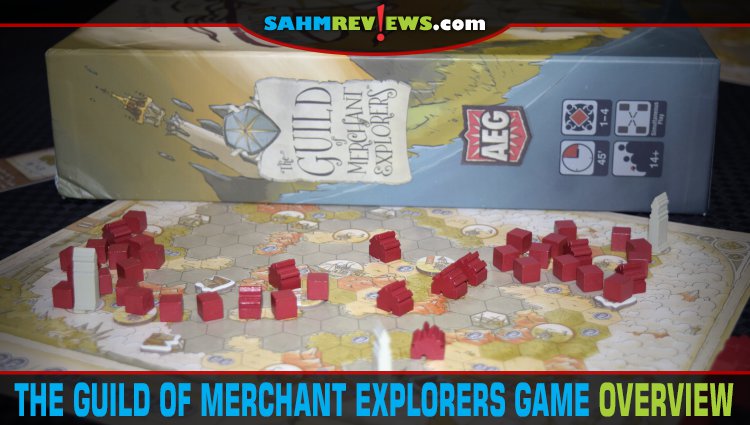 The Guild of Merchant Explorers Board Game Overview

I often put hype and drama in the same category. Both involve a lot of energy and result in little benefit. And because of this, I typically try to avoid them. Drama tends to be an emotional and time-consuming black hole while hype builds us up and lets us down. But sometimes, I cannot help myself. Depending on where the hype is coming from, I’ll give in. When a few friends continuously raved about what a good game The Guild of Merchant Explorers from Alderac Entertainment Group is, I decided to give it a try. It’s just the kind of exploration game I enjoy playing.

In The Guild of Merchant Explorers, players will be working simultaneously to explore their own maps. The game comes equipped with an assortment of maps with enough copies of each for 1-4 players. Give each player the same one along with exploration cubes and village tokens in their player color. The exploration board is placed in the center of the table with the four era cards placed in their designated spots on the board. Towers and tokens are set alongside to create a general supply. Shuffle the explore, treasure and investigate decks separately and place alongside the exploration board. Goal cards are randomly selected for the appropriate map and you’re ready to set sail!

Throughout the game, all players will be working simultaneously to explore their own individual maps. Each map includes multiple lands that consist of various terrain types (mountains, grasslands and deserts) separated by sea spaces. In addition, the maps are marked with city spaces, discovery spaces, ruins and coins.

The random draw of the exploration cards will determine how you traverse your individual boards. The game consists of four eras. In addition to the four era cards already on the exploration board, that deck includes cards that instruct movement over one mountain, two desert spaces, two grasslands, two adjacent of any type or three sea spaces in a direct line. At the beginning the beginning of each round, that era’s card is shuffled into the deck then randomly revealed.

At the beginning of each era, players are given two cards from the Investigate Deck. They’ll select one and discard the other. These are additional exploration options that allow players to move over more sea spaces, explore different types of terrain at once or earn multiples of the coins on spaces discovered. Exploration cards are set next to the player’s personal map in the designated era space. When an era card is revealed onto the exploration board, all players activate their special investigate card for that era. These actions ensure that each person’s exploration is different from everyone else.

As each card is drawn, all players simultaneously place exploration cube(s) on the designated spaces. While all the maps are the same and everyone starts in the same spot, it’s amazing to see how players go in different directions. The goal is to earn coins by doing things such as completing trade routes between cities, achieving community goals, earning coins from terrain spaces, collecting treasures at ruins and discovering towers. As you connect two cities, you multiple their numbers and collect that many coins. Cover one of the cities with a trading post token so it cannot be accessed again.

Whenever a player completely covers a closed-in terrain, they remove one exploration cube and place a village in place of it. Earn coins based on which era the village was established. At the end of each era, the exploration cubes are removed and players must begin their next turn from the center space again. However, if they’ve established a village then they may begin from that location instead.

As you can see, there are a lot of different ways to earn coins. Another way is by collecting treasure cards when discovering ruins. Some of these will provide end-game coins while others offer an immediate bonus. Once a ruin has been pillaged, it gets covered up with a treasure token to ensure the bonus is only taken once.

Between the different maps, unique investigate cards, random exploration card order and various options for earning coins, each game is guaranteed to be unique from the prior. One player may focus on establishing villages while another works to complete trade routes. There are a lot of different ways to earn which is why this game truly lived up to the hype from my friends! It’s not hard to learn and the simultaneous play helps with time management. Ready to explore the options on how to grab a copy of The Guild of Merchant Explorers? Check out Amazon, AEG’s website or your local game store! Extend your travels to Facebook and Twitter for details on several other buzz-worthy games coming soon!

Do you try different methods to earn points or always the same plan of attack?