Home / Recreation / Movies / What We Watched: Hustle on Netflix 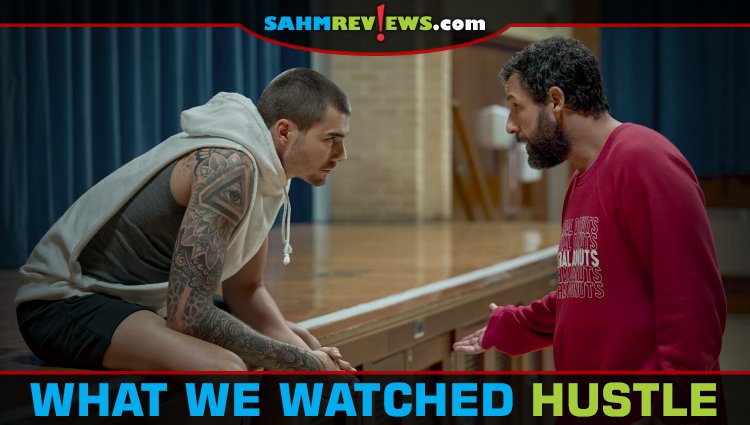 What We Watched: Hustle on Netflix

While waiting for July movies to release in the theaters, Scott discovered Hustle on Netflix. When we started to watch it, we didn’t realize it would be loaded with NBA stars that spanned several decades. We started watching it because Adam Sandler was the star. I’ll be honest and admit that I really have to be in the right mood to watch one of Adam Sandler’s campy comedies. Some, like 50 First Dates, are great. But others (the list is long) aren’t an easy sell for me. He’s an incredibly talented actor and has starred in some completely uncharacteristic roles like Uncut Gems. I wasn’t sure where Hustle would fall on the spectrum, but the trailer was enough to entice me to watch.

Before I tell you what Hustle is about, I have to admit that it was absolutely worth the watch.

Adam Sandler stars as a career NBA scout who was patiently awaiting his opportunity to have a coaching position. Being a scout meant being away from home a lot and despite a love for the sport and his team (Philadelphia 76ers), it’s not what he wanted to spend his life doing.

Amidst his travels overseas, he comes across an uncut gem (see what I did there?) of a player who is extremely skilled on the court. But Bo Cruz (Juancho Hernangomez) hasn’t been playing the regular basketball circuits. He’s been working a construction job and playing pick-up games on neighborhood courts. That’s where Stanley Sugerman (Adam Sandler) discovered him.

Without the approval of the team’s owner, he brought Bo Cruz back to the states to train and vie for a spot on the roster. Things don’t go exactly as planned and that’s where Hustle becomes a slam dunk – not just for the storyline, but for the inspirational messaging that comes along with it.

Throughout the film, we see a variety of NBA superstars (from legends like Julius “Dr. J” Erving to future legends like Anthony Edwards) who play a mix of fictional characters and themselves. Do you need to be a fan of the NBA, basketball or sports in general to appreciate Hustle? Absolutely not. It’s inspirational, funny and entertaining without coming anywhere near the status of a documentary or just another of his fluff-filled productions. And it’s certainly not as rough around the edges as Uncut Gems was.

Do you enjoy movies where actors step outside their normal type of role?