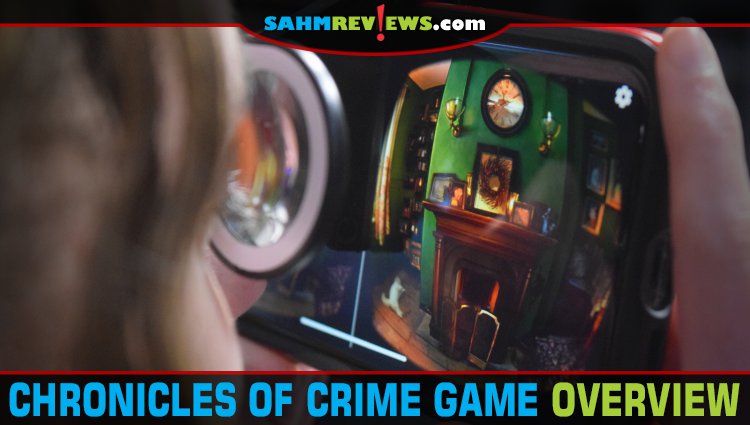 We keep running into the same problems when we try to tell you about a new mystery game we’ve enjoyed. Usually, in order to give an in-depth overview, we talk about how the game is setup and played. Photos focus on the components and are taken during an actual game. With a mystery or escape room type game, this method would spoil everything!

We ran into the same problems when we played the Unlock series, the EXIT line and other escape room games. So apologies in advance for not going into our normal depth with Chronicles of Crime by Lucky Duck Games. Don’t stop reading just yet because I do want to show you a few things that you’ll find in this game that you won’t anywhere else. 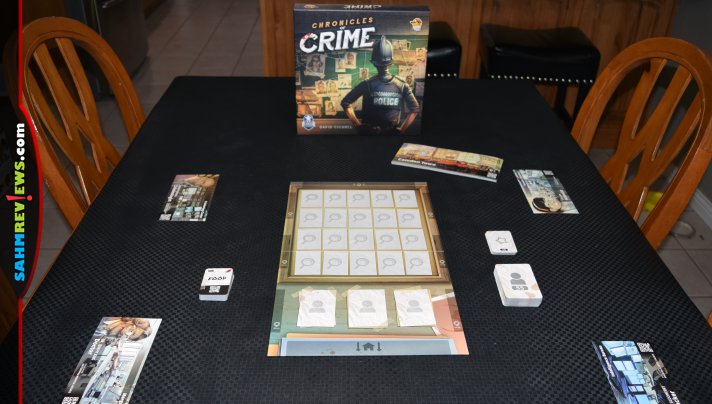 In Chronicles of Crime, you and up to three other players are a team of forensic experts that are sent out to solve the unsolvable cases. Each scenario will have a unique investigation to complete and everyone must work together to solve each mystery. 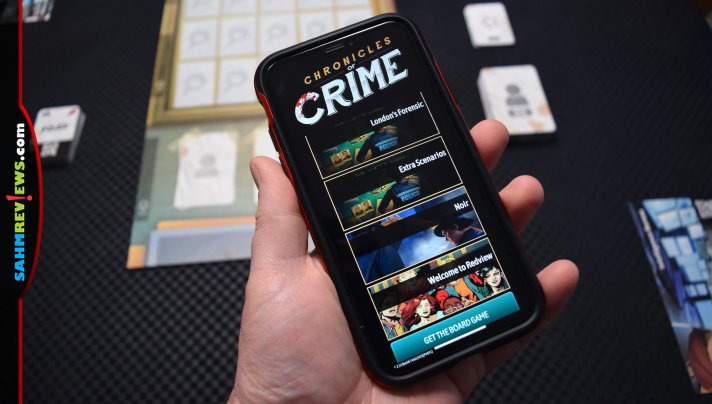 The first thing you must do is download the companion app (App Store, Google Play). Chronicles of Crime cannot be played without it, but once downloaded, it does not need to have an internet connection to function. I know many do not like having a digital requirement in their analog games. Set those worries aside – it is implemented perfectly in this game.

Set up for a game by placing the Evidence Board in the center of the play area. Character Cards, Evidence Cards and Location Boards are kept close by and accessed when needed. Forensic Contact boards are distributed to all players, even if playing with less than the full complement of four. The Home Location Board is placed below the Evidence Board and contains three character slots. 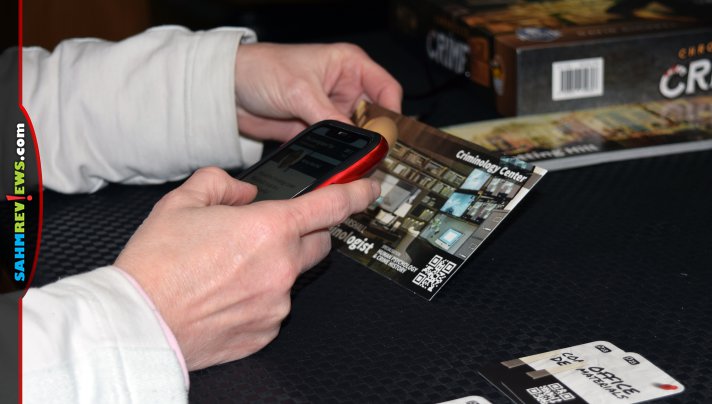 Once you’re ready to begin, fire up the app, select a story and scenario you want to play. There’s a short tutorial investigation available for your first game to familiarize yourself with how the mechanics work. Your progress will be determined in the app by scanning QR Codes on the cards and boards when prompted.

All locations, characters and special items should stay face-down until named by the app. Once revealed, these cards should be placed on their matching locations on the boards. Some locations have to be searched. Here’s where the technology really shines! Using your phone or tablet and pressing the “Search the Scene” button, you can move your phone around a panoramic view of the crime scene! There is also an optional set of VR glasses you may purchase which are placed over your phone. We highly recommend this upgrade! 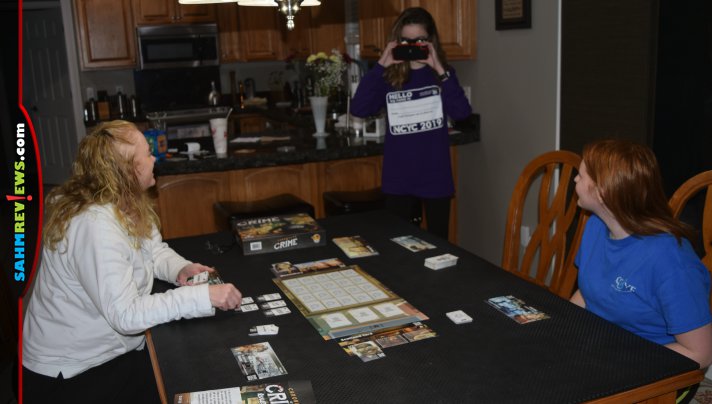 You’ll have 40 seconds to look and describe the scene to the other players. They will pick up matching Evidence cards based upon your description. When you’re done searching, other players may take a shot at investigating the scene. You can call on your forensic team at any time to try and get some extra information about the case. Each type of contact will reveal clues based upon their specialty (doctor, hacker, scientist, etc.) by scanning different pieces of evidence. 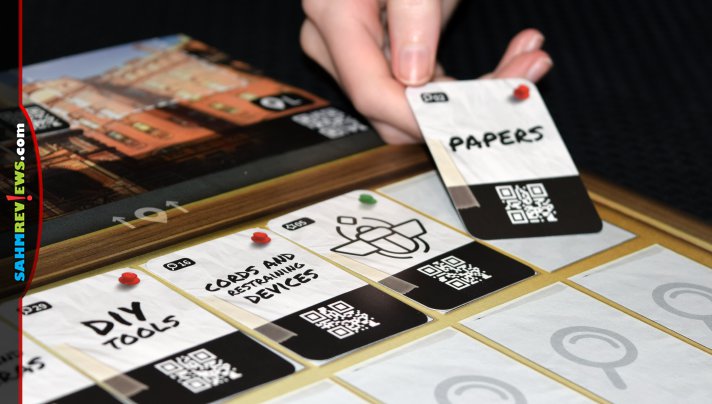 The main thing you’ll be up against is the clock. In Chronicles of Crime, each time you scan an item, view a crime scene or interrogate a character, five minutes of in-game time passes. You’ll find the current game time in the upper right corner of the app. Travelling from one location to another takes away 20 minutes! The longer you take the more it affects your final score! To complicate matters even further, some situations are only available at specific times in the game! 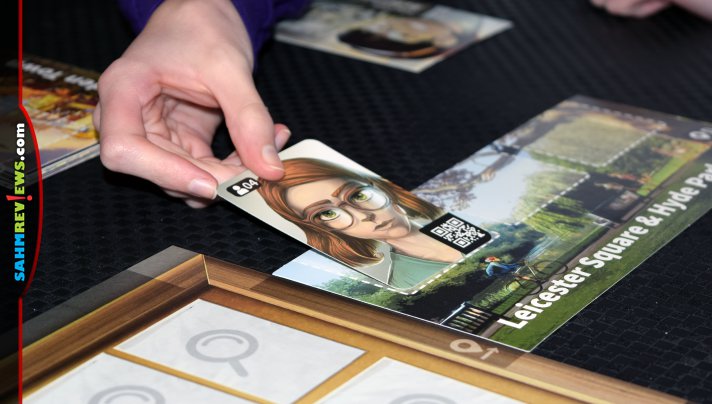 Once you believe you have solved the case, you will submit your report to the Chief Police Officer. Your team will be asked a series of questions about the investigation. Your score will depend upon your answers. You can then either play the scenario again to try and do better or hit the Solution button to read the entire story. Some scenarios have more than one episode! They can be played as single games, but are best done in series. Accordingly, plan on playing the entire episode with the same players. Occasionally you will also find new downloadable scenarios on the app, so be sure to check often as they are available on a regular basis!

If you prefer expansions that have new physical content, Chronicles of Crime has you covered. We’re currently enjoying the Welcome to Redview expansion and have heard of another called Noir. Because Redview is set in the summer of 1985, it speaks to us personally since we were in high school during that era!

You should have at least one mystery-styled game in your collection, and if can only be one, this is the title we recommend. It really raises the bar with what should be expected from an escape room or detective game and manages to keep the retail price very affordable. Ask for it at your local game store, pick up a copy on Amazon or go all-in by grabbing a full bundle direct from Lucky Duck Games! Follow them on Facebook and Twitter to find out when the next expansion(s) will be dropping!

Have you tried any mystery-themed board games?

One comment on “Chronicles of Crime Mystery Game Overview”