Continuing with the discussion about Bicycle Games’ entry into the hobby game market, I wanted to take a look at their second debut, Exchange. Yesterday we went over The Alpha, an area-control game about packs of wolves hunting for food over the course of five weeks. Bicycle swings to the opposite end of the spectrum with Exchange by asking players to become Wolves of Wall Street instead of wolves in a forest!

Finance-themed games are a regular part of our game nights. They may not be as popular as other games because they can be a little dry or complex. We’ve covered a number of examples before – Stockpile, Star Cartel, Bulls & Bears, Ponzi Scheme (a favorite!) and the silly-themed WongaMania. Every one of these titles helps familiarize players with the nuances of investing and Wall Street as a whole while trying to provide an hour’s worth of entertainment. Exchange fits right into this category. 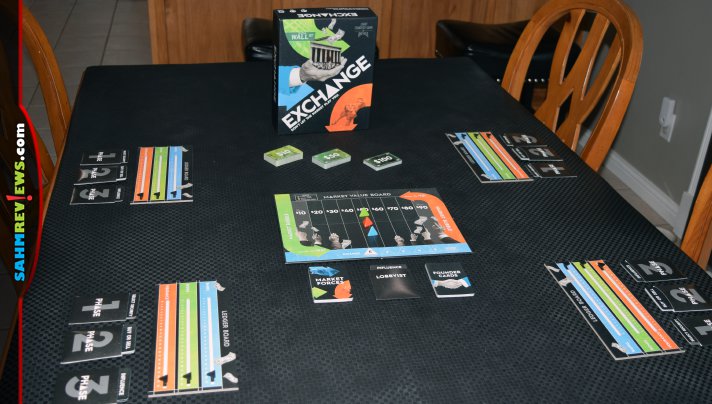 Up to six players will take on individual roles as investors. Having the most net worth at the end of the game is the obvious goal. To do so you must time your purchases and sales by predicting market swings, some of which you have control over. All players begin the game with three Phase Sleeves filled with cards and a Ledger Board where they will track what securities they own. A small deck of Founders Cards are dealt out evenly and feature actual names of signers of the Buttonwood Agreement, the agreement from 1792 that would be the eventual beginning of the New York Stock Exchange. Each person chooses one founder to play as and adjusts their Ledger Board to match the stats printed on the card. The Market Value Board (tracks share price), a deck of shuffled Market Forces cards and the bank are set in the center of the play area. 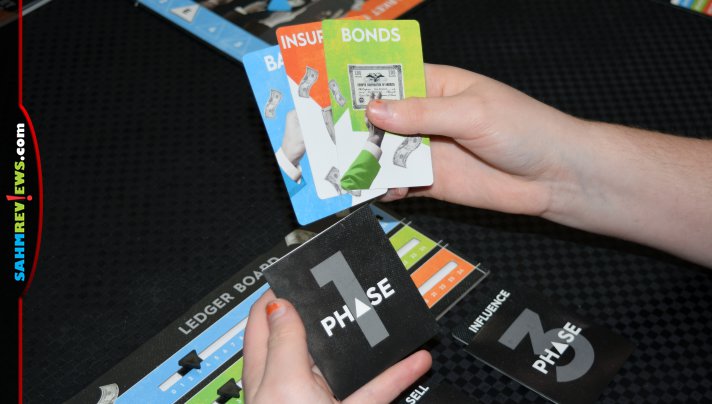 A game of Exchange is played over five rounds, with each round divided into three phases (remember the three Phase Sleeves?!). For the first phase, the sleeve contains three cards. One for each security type is represented and you must choose one to trade by putting it on top of the three-card stack and placing it back into the sleeve. All players will reveal their choices at the same time. 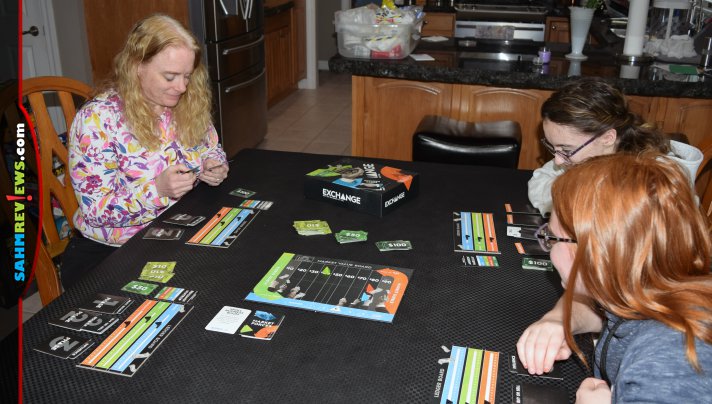 The second Phase Sleeve contains cards numbered one through nine. Choose one as before and put it on top and back into the sleeve. This will dictate how many shares of the security from phase one that you wish to buy or sell. Again, these are revealed simultaneously. The third phase also has three cards and lets you manipulate the market price of one security up or down, your choice. 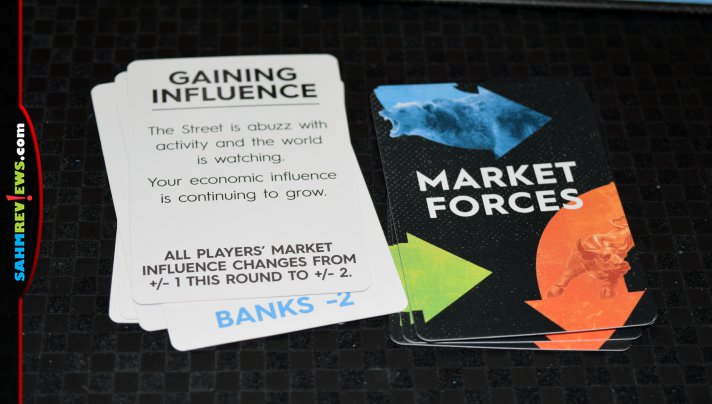 After all three phases have been revealed, the top card from the Market Forces deck is turned over and the market prices are adjusted according to the results. The securities’ values are then also adjusted according to the cards chosen during phase three.  All players then finish the transactions shown from phase two, buying or selling at the now-current market price. 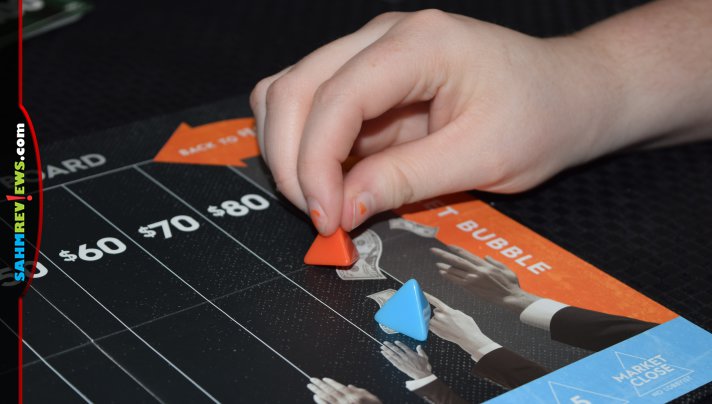 If a security price increases above the highest value on the board, or retracts below the lowest, the market bubble “pops” and the price is moved to the opposite side of the board. This results in a huge price swing and may allow you to artificially force the price of a stock down while buying it in order to capitalize on its new high value.

You don’t have to be subject to the randomness of the Market Forces card. At any time you may pay $50 to peek at the top card, gaining information others won’t have. There is also a Lobbyist who casts a second vote during phase three. The player with the most cash controls the Lobbyist and may change hands at any time! 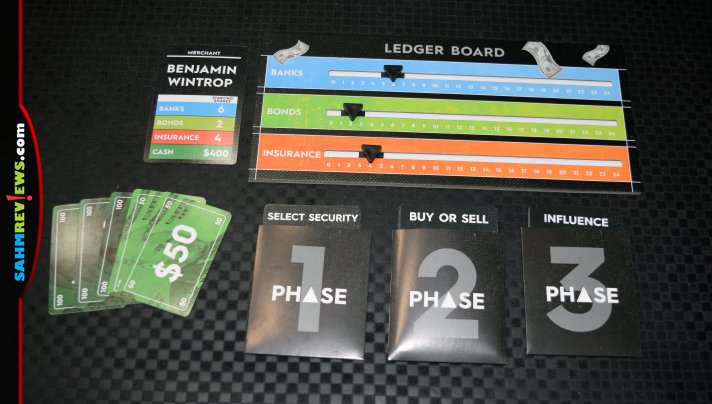 After five full rounds have been resolved, all players have one last opportunity to influence the market. This is basically another round with just phase three. No additional Market Influence cards are drawn nor does the Lobbyist have any power. After the values have been adjusted this one last time, players compute their net worth (value of securities plus cash) and the person with the highest total wins Exchange!

We found Exchange to be on the light side of games in this genre, making it ideal to introduce game players to the world of Wall Street. I do have a couple bones to pick. There is no discussion about the various security types and the risks involved with each one. Insurance is not a security and I would have preferred to see something else like CD’s or precious metals instead. To stay in theme, we assumed these were ETF’s of bank stocks, miscellaneous corporate bonds and insurance companies. 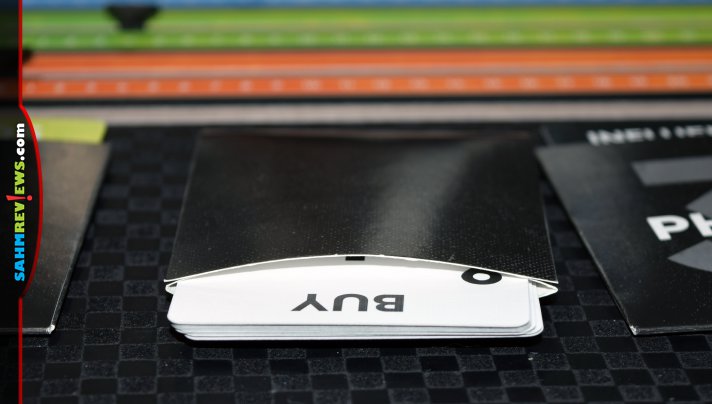 The second minor issue is with the component. While the player boards are of amazing quality for the price, the sleeves you put the cards in are made from paper stock. Two issues arose with this choice. First, over time they will fall apart pretty easily. Tyvek sleeves like you find given to you with your ATM card would have been a much better solution. Additionally, the Phase 2 sleeve has so many cards in it that when you lay it on the table, opponents across the table from you can get a pretty good idea of how many shares you are buying or selling!

Like The Alpha, Exchange was just announced last week and should hit store shelves next month. Pick up a copy from your favorite local game store, direct from Bicycle Games or on Amazon. If you forgot to yesterday, remember to follow them on Facebook or Twitter so you’ll know exactly what day they debut for sale!

Have you played any stock market themed board games?

1 thought on “Exchange Board Game Overview”